Zarina Hashmi’s show Weaving Darkness and Silence at Gallery Espace stands like a sentinel swathed in the rivulets of silence woven around an eloquence that invites deeper contemplation, writes Uma Nair.

To look closely at Zarina Hashmi's show 'Weaving Darkness and Silence' at Gallery Espace is to understand how a great mentor/artist/thinker can weave the power of silence around the distilled threads of abstraction that plays out like a memoir that has aged like wine. 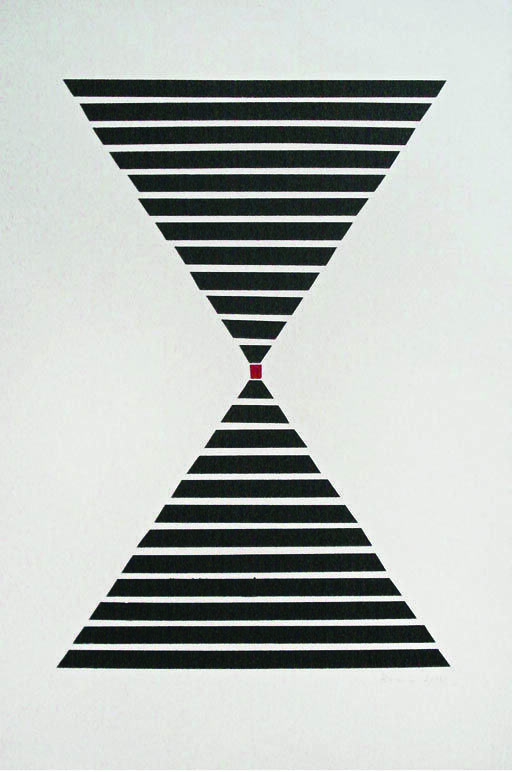 Begin then with her paper works – in which she alternates prominent and faint lines sometimes formed by gouging out the wooden printing plate on either side, and with her precise hands inking what was left behind. Faint sumi ink marks add to the subtle sensitivity and a rare sensibility she plays also with the lingua franca of the visible, and the invisible in which she is talking about different experiences of both division and distance as a residue of loss.
In Untitled Floor Plan-collage a set of three works, we can look at a signature of what is architectural and neatly defined as linear diagrams both in memory and memoir. Geometry comes so naturally to her – and here we see a sparseness an intent of a moody minimalist mooring that works with both addition as well as subtraction in creating small measures of textural terrain. When she uses black strips we see a combing – a cohesive naturality in which she gathers together hundreds of small tensile strips, slices and bits of wood, her ability to allow thin streams of light into an all-black realm is what adds to the tactility.
Divisions and paper
Fence and Loss for words present both vertical and horizontal predicaments of her idea of home – a subject that she has worked over for decades. The striated portions of the buff arches sheet have a lively and spirited nuance perhaps reflecting from within their own sentience of distant activity. And Zarina draws attention to the tactility of the printed sheet , even somewhat playing with its charming coarseness, revealing the individuality and lively eccentricity that can be the textural quality of the handmade paper she works with.
Look closer still, at Birds in Flight and Completing the circle – she gives us a contrast between Indian handmade paper and Somerset antique paper – she invites us to look at the warm, white sheet and creates her composition in a tranquil clarity of what is both smooth and clear – and elegant. (Her love for Arches Cover paper, a high-quality, industrially milled cotton-paper produced since the 1500s in France and prized for many types of archival printing-tells us so much about the power of materials and mediums.)
Woodcuts
Her woodcuts that hint at the fence –Behind the fence is a summation of sorts of the subtle layering of space and physical divisions-the fine rendition heightens the sense of physical division – the jagged lines operating in two dimensions, as it presents layered connotations. In a quaint subtle way these two woodcuts talk to us about partition.
Zarina the artist, daughter of a university history professor, was born in Aligarh. She was 10 when the partition of India and Pakistan happened in 1947. Just over a decade later, her comfortable family moved to Pakistan, where their Muslim faith encountered less resistance. Soon she married a diplomat and moved away.
Zarina has since lived and worked in Thailand, France, Germany, Japan and the United States – first Los Angeles, then New York.
Reflective contemplations about place and home are a central consideration of her print compositions. What is uncanny is that she uses the sheets of paper as her movable but constant home. 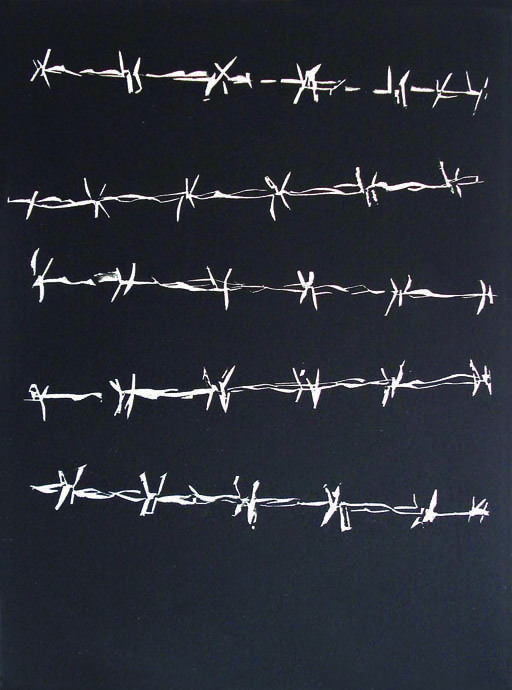 Technical finesse
Zarina studied in Paris with the highly influential British printmaker Stanley William Hayter. (Artists as diverse as Kandinsky, Picasso, Pollock and Rothko worked with him.) From Hayter, she learned conceptual as well as technical knowledge of the medium of printmaking.
Keeping that arsenal of knowledge in mind you understand that Zarina's abstractions are actually built on traditions of European Constructivist art, critics have also noted that they mirror Robert Ryman's 1970s Minimalist conviction that the medium and the image are actually quite inseparable. She works on the assumption that the essence of paper needs to emerge. Then in this suite the sheet of paper belongs to a powerful process in which it is conceived as a unique and distinctive place on which the artist frames her memoir of mappings.
In 2006 in an interview to me she said: " Paper is typically made from wood pulp, and my process of printing simple designs from inked fragments of wood has always been like a weaving in of silent conversations. Geometry has been a leitmotif for me, while my work remains non-figurative, the grainy compositions in my prints go beyond suggestions because they hold within the corollary of fences, screens, walls and even pens. I feel its like a corralling of spaces."
Poetic resonance
More equivocal than most of her prints, however, the sculptural material of sheesham beads in Tasbih emanates a poetic resonance of the relationship to tradition and the assonance of spirituality.
Sadia Shiraz says: "Zarinaa's preoccupation with architecture finds itself rendered anew in this exhibition. The works display her characteristic ability to distill emotion down to its most essential, expressive forms. Forms that are invested in materiality and hapticity, that do not shy away from embellishment and ornament despite their spareness. The representational language of the architectural plan that is characteristic of Zarina's earlier work from the mid 1990s plays out in a series of visually dynamic line collages of floor plans."
… Patterns arise in these pieces as a result of a series of operations the artist employs—rotation, repetition, mirroring, layering, and weaving. The collages feel improvisational, geometries are forgiving and seams are imperfect.
It was in the 1980s, Zarina began to make fully three-dimensional objects, sometimes cast from dense paper pulp and sometimes from die-cut metal or wood. Forms suggest flowers, seed pods, cocoons, meditation beads and stairs – objects implying transition. Colour enters the mix with a rust or just natural wood shade joining the mostly black, white and earthy brown of the prints. The show stands like a sentinel swathed in the rivulets of silence woven around an eloquence that invites deeper contemplation.
Follow