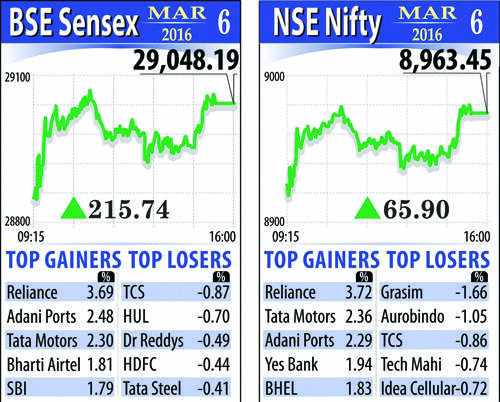 The markets made a powerful comeback on Monday as the Sensex rallied almost 216 points and reclaimed the 29,000-mark to close at a 2-year high, cashing in on solid gains in index heavyweight RIL amid mixed global cues.
The all-powerful GST Council approved the final draft of central GST (C-GST) and integrated GST (I-GST) and will take up for approval the state-GST and Union Territory-GST (UT-GST) laws at its next meeting due March 16, which instilled a sense of confidence in investors.
The 30-share barometer remained up throughout and hit a high of 29,070.20, powered by a rally in RIL and other blue-chips. The index ended 215.74 points up, or 0.75 per cent, at 29,048.19 -- its highest closing since March 5, 2015, when it had closed at 29,448.95.
The index has lost 152.04 points over the past two days.
The optimism led to the NSE Nifty gaining 65.90 points, or 0.74 per cent, to end at 8,963.45, a level last seen on March 3, 2015, too when it settled at 8,996.25.
The rupee notched up gains against the dollar, which added to the sunny side.
Reliance Industries came out top on the heap, surging 3.69 per cent and settling at a fresh 9-year high of Rs 1,304.90, after the company announced that the promoters will be reshuffling their shareholding.
RIL has gone up by over 21 per cent after its telecom venture Jio said last month that it will begin charging for data services from April.
Dredging Corporation rallied 12.68 per cent to close at Rs 502, largely on reports of possible stake sale. Capital inflows continued, which ensured both the Sensex and the Nifty were back at their crucial levels. Foreign portfolio investors (FPIs) net bought shares worth Rs 1,528.48 crore on last Friday, according to provisional data.Globally, major Asian indices closed mixed.
BSE eyes 200 listings on SME platform by June
Leading stock exchange BSE expects to have 200 companies listed by June on its SME platform, an exclusive platform it has launched for raising of funds by small and medium enterprises. So far, 165 companies have been listed on the BSE's SME platform with an aggregate market capitalisation of close to Rs 19,000 crore. These firms have raised over Rs 1,288 crore through their initial public offerings (IPOs).
Of these, 24 have migrated to the BSE's main board.
Listing will help in wealth creation for the companies and their promoters, BSE's MD and CEO Ashishkumar Chauhan said here.
Many good companies from areas like manufacturing, metals, information technology and others are coming to list on the BSE's SME platform, he said.
"We have got a very good response on SME as in the last five years. we have now got 165 companies listed and at the end of this month, 10 more companies will be listed and another 10 firms later. So, effectively we will have 200 companies listed by June on the BSE SME platform itself," BSE SME Head Ajay Thakur told reporters here.
Listing will help these companies to enter capital markets and finally migrate to the main board platform.
It will also help in providing easy access to capital, enhanced visibility, increasing brand building, growth opportunities and exit route for old shareholders, among other benefits.
As per the norms, companies looking to list on the BSE's SME platform need to have post-issue paid up capital of a minimum Rs 3 crore.