"Dancing in the Family" | Twirling to tradition

This is a riveting chronicle about three generations of women who profoundly impacted the revitalisation of classical dance in India and abroad, writes Madhupriti Mitra

For some, dance is passion; for some others, its a way of life while yet others, find it therapeutic. Dance has allured audiences with extraordinary charm while for the dancer, it had enhanced their personality. Looking back in history, we can see that Indian dance forms have not only had a great influence among Indians but these various art expressions also hold a dear place among enthusiastic colonisers smitten by Indian culture.

Born in Calcutta in 1946, a year before India’s Independence, Sukanya Rahman is the daughter and granddaughter of classical Indian dancer Indrani Rahman and Indian dance pioneer Ragini Devi respectively. Sukanya’s life has revolved around dance, dance and only dance. She grew up seeing dance as a family tradition which has been carefully passed from her maternal grandmother Esther or Ragini Devi, and her generation.

To embrace this multifaceted art form and the journey traversed by her grandmother and mother through the evolution of dance, Sukanaya Rahman has penned down this memoir titled Dancing in the Family. The novel delves into the story of ‘three generations of women who were profoundly impacted by the revitalisation of classical dance – especially Bharatnatyam and Odissi – in India and abroad’.

The story commences with the author’s childhood that revolved around her mother, grandmother and father, who was an architect and had contributed to building various relevant structures which are now popular places of attraction. The author, in the book, vouches for her grandmother Esther, whose passion for Indian classical dance landed her in India from far-off United States. 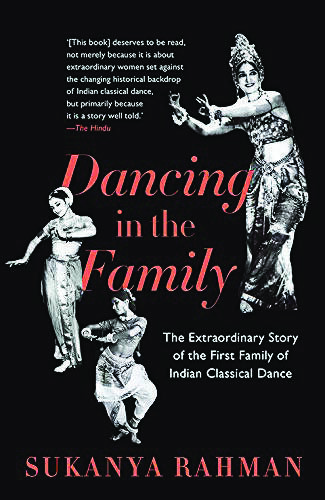 The novel then takes a tour of the pre-independence era with glimpses of freedom fighters and their continuous effort to free India from the clutches of Britishers. In the meantime, Ragini Devi found her love and moved to India. It seems like she was fixated to Indian culture and its myriad arts. She not only performed in India but also spread the knowledge about authentic Indian dance in the United States. She had always been very fond of Indian culture so she decided to reveal the spiritual beauty of the art to the world. For her, the art form is an act of worship and not just a medium of entertainment.

Every story of this book covers minor incidents with thorough detailing into specific moments. It also unravels the spiritual complexities and intricacies of classical Indian dance vocabulary. The author talks about mother Indrani Rahman and her accomplishments. Some fortune-teller had predicted that her fame would eclipse her mother Ragini’s success.

The book explores how Indrani became the pioneer in introducing Odissi to the world stage as the dance form which earlier was performed only by the marginalised Devadasi community.

Following in her mother’s footsteps, Indrani had not only brought Indian classical dance to the forefront but also won the Miss India pageant in 1952 with her extraordinary talent and charm.

The book explores the life of the author who carried forward the family tradition of dance into the twenty-first century. It also carries more than 50 archival family photographs dating from 1893 to make this book a gem in the history of Indian classical dance.

For connoisseurs of dance who desira sumptuous helping of Indian dance history, this book is a treasure.