"On Leaders and Icons: From Jinnah to Modi" | Titans of the South Asian Subcontinent The rival theories of whether individuals or socioeconomic forces determine history have their own followers; but for the South Asian subcontinent, it was the people at the helm – those who led the freedom struggle and charted the subsequent destiny of the newly-independent countries – that seem to have an edge. Determining their legacy on the present, however, poses its own problems. 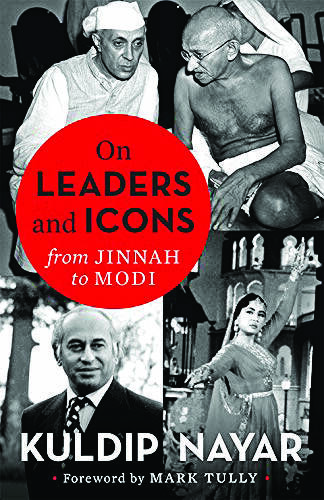 Not the least of these is that most of these personalities have been elevated to an exalted – and remote – status or their intentions and actions are being subject to questioning and re-evaluation due to a wide array of reasons. And with those who actually observed them in their day and age slowly passing on, the task of trying to know and understand them becomes more difficult. Fortunately, there was one key eyewitness, who, in keeping with the ideals of his profession, diligently undertook the task.

This is not just because he had all the necessary credentials, for not only did he, both literally and figuratively, stand tall among the Indian journalist fraternity, but he also served as a government press officer towards the beginning of his career, including stints with Prime Ministers Jawaharlal Nehru and Lal Bahadur Shastri – including on that fateful trip to Tashkent in January 1966 – and was in close terms with a number of senior leaders across the political spectrum and national boundaries.

For, as renowned BBC journalist Sir Mark Tully holds, it was also because of his “remarkable ability to get on with people”. “He was not one of those journalists who feel it’s their business to pick fights, to interview aggressively. On the contrary, he sought to understand the people he was reporting on and learnt of stories before anyone else, getting scoops by the trust he inspired,” he writes in the foreword, citing several startling examples.

In the pages that follow, Nayar gives his take on how the Congress’s tryst with dynasty rule and the glorification of its first family’s members began, the souring of the ideals of freedom fighters and the fight to determine the prevailing ethos of Indian politics and more. All this is told with his trademark insight and a good dose of candour. For, as Nayar says, left to him, the book would have been called “Heroes, Neros, and Zeroes”.

Despite the title of the book, he expectedly begins with the Mahatma and the sense of moral courage and superiority he retained even at the end of an eventful life – and well beyond into the course of the country he helped to free and whose attitude he single-handedly influenced.

Nayar moves on to another iconic figure – the hawk-nosed Khan Abdul Ghaffar Khan, who always nourished a sense of betrayal by his Indian counterparts, going as far as questioning the author on why they always behaved in a way reminiscent of what Napoleon termed his British enemies, a “nation of shopkeepers”.

There is a telling account of Mohammad Ali Jinnah, whom the author met as a university student, detailing how the founder of Pakistan had miscalculated the nature of relations between the two nations in the future.

But, of most interest are the chapters on Prime Ministers Nehru and Shastri, for it is here that we find some insights into what Nehru thought about his successor, especially on the question of his daughter, what Nayar himself paid in the selection of Shastri – though unconsciously as he says – and the roles of other Congress leaders.

While most of this may be familiar to the older generation, what may be of interest is Nayar’s recounting of how Nehru dealt with news reports concering him, his championing of unconditional adult suffrage and his final view of Pakistan, Shastri’s humility and steel – and that of his wife – and his encounter with Meena Kumari on the sets of Pakeezah. Then there is Nayar’s own misadventures in trying to inform the United News of India, the news agency he then headed, of the news of Shastri’s demise at Tashkent, but briefly.

The dozen other accounts feature Indira Gandhi – with whom Nayar was on first-name terms and to whom she confessed she was wrong about the Emergency in their last meeting. There is Jayaprakash Narayan and his sense of betrayal by the Janata Party government, vignettes of meeting the likes of Zulfiqar Ali Bhutto (and his overweening conceit), Sheikh Mujibur Rehman and B P Koirala and some equally valuable thoughts on Prime Ministers Manmohan Singh and Narendra Modi, J R D. Tata and Ratan Tata, Khushwant Singh and Noor Jehan.

This is by no means a comprehensive or fully objective view of these iconic figures but that seems to be Nayar’s whole point. Unless we regard them as people prone to be fallible, they will remain idols, not ideals, and that is not what they would have wanted.

(The reviewer, a prolific reader and journalist, writes under the pseudonym The Book Genie)