"Pakistan: At the Helm" | The undoing of Pakistan

Over the years, Pakistan has been governed by dangerous leaders who have reduced the nation to a land fostering only ill-repute and terror, argues Anil Bhat The book’s cover is a collage of eight faces of those who were at the helm in Pakistan since its painful birth and who contributed towards making it the dangerous mess it is today. What makes this book very informative and excitingly interesting, is the series of glimpses into the lives of these eight leaders, revealing some less-known aspects of their characters – their uncertainties, weaknesses, vices, failings, foibles etc. It cannot be that these persons did not have any virtues or good traits. But being a part of a morass of founding and building a nation on a foundation of lies/denials/delusions/self-deception compounded over seven decades, made them tread the same path. And, there appears to be no hope or scope for any kind of reformation, so far at least. 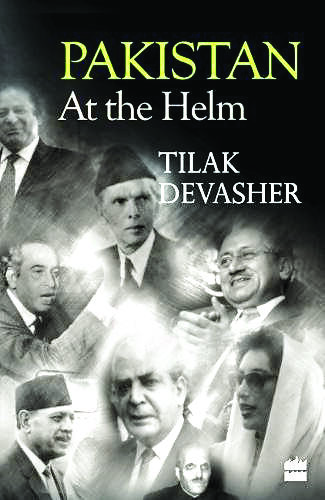 Mohammad Ali Jinnah turned out to be the first lie. Partial to pork, non-pious and ever hungry for control, Pakistan for him meant power and not any conviction of creating an Islamic state. Mountbatten described him as “a psychopathic case” and wondered “how a man with such a complete lack of administrative knowledge or sense of responsibility could achieve or hold down so powerful a position”. That is ironic because when the Brits were floating several plans in the 1930s to partition the Indian sub-continent, it was the young and politically ambitious barrister Jinnah, who they identified and hand-picked to propound the two nation theory. Jinnah’s final irony is that all the power he had achieved in new born Pakistan as the Qaid-e-Azam did not help him even reach a hospital in time when he was dying.

Next came General Ayub Khan, the first of four (so far) dictator presidents of Pakistan, who promoted himself to Field Marshal and sowed the seeds of military dictatorship by abrogating the Constitution of 1956 and introducing martial law. Later, feeling heady with a substantial dole of American weapons and some of his India-related delusions – that Indian Army was weak after the 1962 Chinese aggression, that India’s Prime Minister Lal Bahadur Shastri was weak and that a Pakistani soldier could take on ten Indian soldiers – he waged Pakistan’s second war on India in 1965, resulting in heavy losses of men and material to Pakistani forces. That war also exposed how ill-trained and poorly led Pakistani soldiers were. 4 Horse, also known as Hodson’s Horse, the Indian Army regiment Ayub’s father Risaldar Major Mir Dad Khan had served in, destroyed 79 Pakistani tanks –mostly then newly acquired American Pattons- and 17 recoilless guns.

An interesting and ironic fact about Ayub’s successor, General Agha Mohammad Yahya Khan, which one of his contemporaries, Brig S S Malik, Indian Army, shared with this author was that neither was Yahya happy about the Partition and nor was he keen on moving to Pakistan. It is only after the Partition that he changed his mind and opted for Pakistan. After 13 days of the war in December 1971, on the eve of the surrender of the Pakistan armed forces to the Indian Army at Dhaka, Lt Gen AAK Niazi was desperately trying to contact Yahya but failed as the latter was partying at his new mansion in Peshawar with his latest paramour, ironically a Bengali lady known as ‘Black Pearl’ and recently assigned by him as Pakistan’s ambassador to Austria (as quoted from Pakistan’s Drift Into Terrorism, by Hassan Abbas). The next morning, the surrender of almost 93,000 Pakistani armed forces and civilian personnel at Dhaka, marked the dismemberment of Pakistan. Erstwhile East Pakistan got liberated to become Bangladesh.

Pakistan’s defeat and dissection in the 1971 war cleared the decks for the utterly wily Zulfikar Ali Bhutto, who, days later, became Pakistan’s first president and civilian chief martial law administrator. Most contemptuous about armed forces officers, he was clever enough to suck up to them whenever he thought it suited him. He misled Ayub with his faulty assessments about the Indian Army and the Kashmiris during 1965 and ditched him after the Tashkent summit. Bhutto’s arrogance and huge obsession for power made him sick enough to go as far as having many of his jailed political opponents subject to severe sexual humiliation. Ironically, it was not a military dictator but Bhutto who began Pakistan’s nuclear weapons program in 1972 after declaring, “If India builds the bomb, we will eat grass or leaves, even go hungry, but we will get one of our own.” Bhutto’s over-smartness and deviousness with Pakistan’s army brass eventually sealed his fate of being implicated, imprisoned and killed – not by the customary hanging but by a blunt blow behind his head.

The third dictator, Gen Zia-ul-Haq, of the armoured corps and known to dislike staff work, was transferred from one regiment to the other four times. One of his commanding officer’s opinion reflected in Zia’s confidential report was, “he is not fit to be an officer in the Pakistan Army.” Great ironies of Zia and Bhutto were that Zia became the army chief by sucking up to Bhutto, later had him arrested and eventually “hanged”. Zia himself was killed in a mysterious air crash. His legacy is Islmaising the army, ‘mulla-ising’ governance and worse, sowing the seeds of terrorism, a task which the fourth dictator, Gen Pervez Musharraf, greatly widened the ambit of.

Benazir Bhutto has been described as courageous but arrogant like her father by William Dalrymple and one whose two tenures as prime minister were conspicuous by “incompetence, extra-judicial killings and brazen looting”, by Imran Khan’s former wife Jemima. The ironies related to her assassination were that she had doubts about her security; one of her exchanges with Musharraf ended with him telling her that the whatever Americans do, “your security is based on the state of our relationship”; she thought Musharraf’s threats were for restricting her campaigning; while she was killed at the same spot Liaqat Ali Khan was killed in 1951, her party won making way for her husband Asif Zardari – known for his flirtations and his 10 per cent cuts and yet, who she loved deeply.

Mian Nawaz Sharif has been described as impulsive, thriving on dramatic moves rather than well considered decisions, one with a great weakness for food, had delusions about being a great cricketer and known for taking drastic short cuts to reach the top. One aspect about Sharif the book elaborates on is his use of public office to further his business through corrupt money.

The last in the cast of this book is Gen Pervez Musharraf, the commando who more than deserves to be called the butcher of Kargil – not so much for what he tried to do against India, but for the over 12,000 troops of the Northern Light Infantry raised specifically as cannon fodder for his misadventure around Kargil. He initially refused to acknowledge their dead bodies and many of them starved without rations on those frozen heights.

The author deserves praise for his research. While this review gives few glimpses into the lives of the leaders, the book should be kept handy as a reference piece by Pakistan watchers, those of the politico-bureaucratic-military establishments and certainly, for scholars and analysts.