"The Future Is Asian: Global Order in the Twenty-first Century" | The resurrection of Asia

The Western world rose to glory on the pillage of Asian colonies. Now, the greatest fragment of Asia soars to surpass the West, writes Kavya Dubey The discourse opens with an unanticipated forecast by Napoleon when he quipped about China: “Let her sleep, for when she wakes she will shake the world.” Asia is the formidable stretch from the Mediterranean and the Red seas across two-thirds of the Eurasian continent to the Pacific Ocean – encompassing fifty-three countries and close to five billion people – of which, only 1.5 billion are Chinese. Parag Khanna maintains that for the Asian century to take off, Asia must crystallise as a unit greater than the sum of its parts. 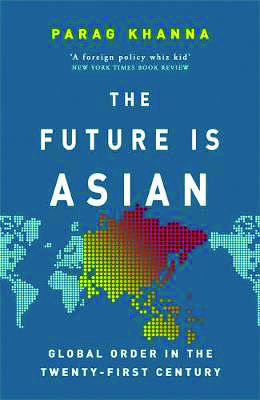 The May of 2017 was the turning point in history when the cornerstone of an Asian-led world was laid: sixty-eight countries representing two-thirds of the world’s population and half its GDP gathered in Beijing for the first Belt and Road Initiative summit. This coming together of Asian, European and African leaders marked the launch of the greatest coordinated infrastructure investment plan in all of human history. This massive project worth trillions of dollars seeks to connect, in the coming decades, the world’s most populous centres by means of commerce and cultural exchanges. It ushers in a new Silk Road era.

The Belt and Road Initiative is pivotal to the rise of China as a superpower, an amalgamation of infrastructure and diplomatic project akin to, or perhaps one that surpasses United Nations and World Bank of the mid-twentieth century. Its crucial distinction is that it was conceived and executed in Asia and by Asians. This is one entire side of the world and its impact on the world at large has begun to show.

Asia’s economic might is not an achievement of contemporary times. Late British economist Angus Maddison illustrated that until the mid-1800s, China, India, and Japan together generated a greater total GDP (in terms of purchasing power parity) compared to USA, UK, France, Germany and Italy combined. It was the Industrial Revolution that changed the fate of Western countries and their societies transformed, their economies modernised, their empires expanded, and the region to bear the brunt of it all was Asia – most of which was subjugated.

Asia has come a long way in the past several decades, and, thanks to China, has gone ahead several more decades with its ambition and undertakings. Juxtaposed with how the exclusive plurality of India was unified inadvertently by the British, European colonialism had a lasting impact on the construction of national identity among Asians. A Chinese is a Chinese and a Korean is a Korean, they are not out in the world as ‘Asians’; this notion of ‘Asian’ being deemed an artificial construct. The author observes that there is no longer a common understanding among Asians of what it means to be an Asian – the Europeans robbed Asia of the Asian identity.

What the Westerners call ‘global rule-based order’, the Chinese phrase it as ‘community of common destiny’. It is only a matter of time when we realise that they are the two sides of the same coin, and that both rules and destiny must be made together. There is no turning around from today’s multi-polar, multi-civilisational order. The Western world rose to glory on the pillage of Asian colonies. Now, the greatest fragment of Asia soars to surpass the West. Asia has a global future and we are witnessing the beginning of it. This book is an insightful peek in the changing times centred on Asia and presents a comprehensive understanding of the same.