"Draupadi: The Tale of an Empress" | The Empress of Indraprastha

In reading Mahabharata through Draupadi’s lens, we garner a more comprehensive understanding of politics and war in tandem with the walled, personal world; explores Radhika Dutt Mahabharata is not just a story of kings and political ploys. Though initial narratives were limited to valorisation of the Pandavas, later readings have allowed broader perspectives. Draupadi: The Tale of an Empress by Saiswaroopya Iyer lends such a lens that dismantles binaries of the inner and outer world to present a more coherent reading of this unforgettable epic that has been epochal to Indian history, literature and culture. 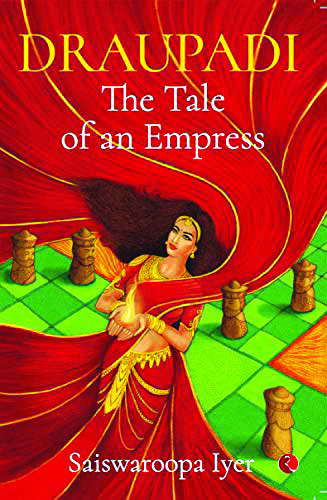 Valour of the Pandava brothers, their dedication to their mother, Kunti and land, Bharata, and ultimate resilience in the face of injustice and austerity had reigned as the central plots of Mahabharata. Traditional narratives, often passed down by a word of mouth, tend to dismantle literary nuances — not with the intention to falsify them, but more as an involuntary move to coalesce stories with essences of reality. And, patriarchy has been a reality we can rarely escape. Naturally then, over years of dissemination, Mahabharata became a reading on the Pandavas, rarely glorifying a woman beyond her observed sanctity as a dedicated, subservient mother, wife or sister.

In truth, women rarely fulfil such limited roles. Surely a sage, no matter how ancient, would’ve acknowledged this possibility. Immortalising the woman, Iyer’s Draupadi: The Tale of an Empress does an impressive job of dismantling traditional, narrow narratives to bring the Empress of Indraprastha at the pivot of a land torn by war and bloodshed.

Draupadi is unique. As the wife of five Pandava brothers, Draupadi of centuries before Christ lives a life that many, even today, would find questionable. A princess, a queen, a dedicated wife and a master of skilful thinking, Draupadi is no ordinary woman. In fact, even when ordinary in fulfilling mundane duties of the home, she remains extraordinary in her symbolism through the epic. However, while Iyer delivers a female perspective of the epic, her story is not just about Draupadi. It is as deliberative about the inner world of a woman, as it explicates in beauty the inner world of men that has been largely shunned in our deeply misogynistic society but has never really been uprooted from its essential existence.

The Pandavas find their individual homes in Draupadi while she carefully glides as the unmistakable glue sustaining their fraternity. While many emphasise on how the war of Kurukshetra was fought due to hostility within the family, most tend to overlook Draupadi’s critical role in affirming bloodshed and violence as the only way to avenge the sinners that had contaminated Bharat’s true piety. Even when Yuddhishtira appeared uncertain and the twins appeared desperate to detach themselves from the cruelties of warfare, Draupadi stood resilient. She refused to be overcome by sentiment and emotion, as is often ascribed to a woman. Instead, she remained unrelenting in her belief that those who stripped her dignity and vainly humiliated her husbands deserved nothing less than brutal death and irrevocable loss.

Draupadi is a fascinating woman. Her colours are many and emotions, rather diverse. Sometimes irrational but mostly composed, Mahabharata, in many ways, pivots around her decisions and persistent longings. Alongside appearing as a most resolute woman deserving of being queen, reading Draupadi’s Mahabharata presents a most comprehensive view of the home in tandem with the world. As she rules the world, she is also home to the central characters of the narrative. Moving beyond traditional narratives that only detail the Pandavas’ engagement with subjects and enemies, Iyer unravels their inner world – here, they are plagued by contradictions, often more distraught rather than reverential, while struggling to make peace with their past, present and destiny. That is the true charm of a woman in many ways – reading her story will not only provide fresh perspective on a character less delved into but also nourish the shades of a dominant narrative that have been strategically concealed from public view.

Iyer’s tome is refreshing, engaging and often quite exciting. Whether in plotting against the misogynistic Keechaka or in tracing her blossoming friendship with Krishna or even in understanding the nuances of her relationship with Mother Kunti, Draupadi offers a rainbow of characters, perspectives and contradictions. Iyer has not only venerated Draupadi’s story — more importantly, she has rounded the valour of Pandavas, who have long been reduced to war puppets. With her writing, they have received their due recognition of being real men with palpable confusions in times of war — and, a large credit for their ultimate victory must be given to their guardian angel, the Empress of Indraprastha, who doesn’t hesitate to establish herself as the reigning wife, mother and daughter alongside being a skilful diplomat.