"River that yields gold" | Superhuman River : Stories of the Ganga

Worshipped as a living goddess for centuries, the Ganga has been a sustenance for five hundred million people. In Superhuman River, a compelling and fresh perspective on every aspect of this extraordinary river, Bidisha Banerjee explores the Ganga from its source to the sea; Excerpts: The unknown Bird in the cage...

how does it fly in and out?

I travelled to Bangladesh after two incidents made it imperative for me to travel there. First, in an Indian village, I bought a VCD that promised to deliver Bangladeshi folk songs, and so it did – sung by a procession of dancing women. They oddly looked a lot like me. en, during my trip to the Gangotri glacier, I got into an argument about whether the Ganga flows in other countries besides India. I pulled out an atlas to prove that it didn’t, but the neat lines on the map failed to convince my venerable trekking guide, who insisted that twenty years ago he had carried research equipment for some Germans down the length of the Ganga—and into Bangladesh!

My great-grandparents were born in present-day Bangladesh, but my family in India has lost all ties to the new country. When I visited in 2010, Bangladesh was thirty-nine years old, exactly a decade older than I was. My relatives, who are Hindus, were thrilled but apprehensive about my trip. ‘Muslims,’ they said, by way of explanation. My father was a little more nuanced: ‘Dhaka is okay. But don’t go to the border areas. Don’t get involved with infiltrators, drug dealers, smugglers.’ I was curious to know more about his take on Bangladesh. Growing up, I’d heard a lot from my mother’s side of the family, about how their ways of speaking and cooking marked them as ghotis (with long-standing roots in West Bengal), whereas my father’s family were bangals (recent immigrants to West Bengal from what used to be called East Bengal). I was fascinated by this culture that seemed so different and yet so close to the one I grew up in, and I wondered how the Ganga had influenced these distinctions. I also had a cartographic fight to win.

Map after map had bolstered the claim I’d made to my trekking guide: that the Ganga flows only through India. In 2007, a correspondent for National Public Radio in the US published six dispatches from his trip down ‘India’s holiest river’, during which he asked a lot of Hindus why the river was sacred to them. In the accompanying map, the Ganga had one beginning and one end, draped across India like a demure sari—and what proper Hindu wants to imagine India’s holiest sari cut in two and partially wrapped around a Muslim neighbour? An Indian river cruise company’s website, which has since been taken offline, put it as directly as possible: ‘The Ganga flows through India only. It flows through no other countries.’

But just when I was convinced I could prove my old trekking guide wrong, I came across a second kind of map which showed the Ganga breaking in half near the border and flowing through both India and Bangladesh, occasionally meeting other rivers, sometimes layering on new names, and eventually fragmenting into smaller and smaller channels until all the waterways reached the Bay of Bengal, forming what are sometimes called ‘the mouths of the Ganges’.

Only a few of these mouths emerged in the Indian half, which geologists have labelled a ‘moribund delta’ because it is older, less fertile, and less influenced by shifting rivers than the ‘active’ delta on the Bangladeshi side. Only three friends of mine had ever been to Bangladesh. All of them had visited in 2007, when the country began its most recent military dictatorship. Their anecdotes were not calculated to reassure. ‘Someone high up in the military warned us about the coup beforehand,’ two of them said. ‘We were told to stockpile food and stay in our apartment for two weeks. We barely ventured outside the capital.’ the third friend told me, ‘Don’t believe anything they tell you about Bangladesh. You’re going to love it.’ 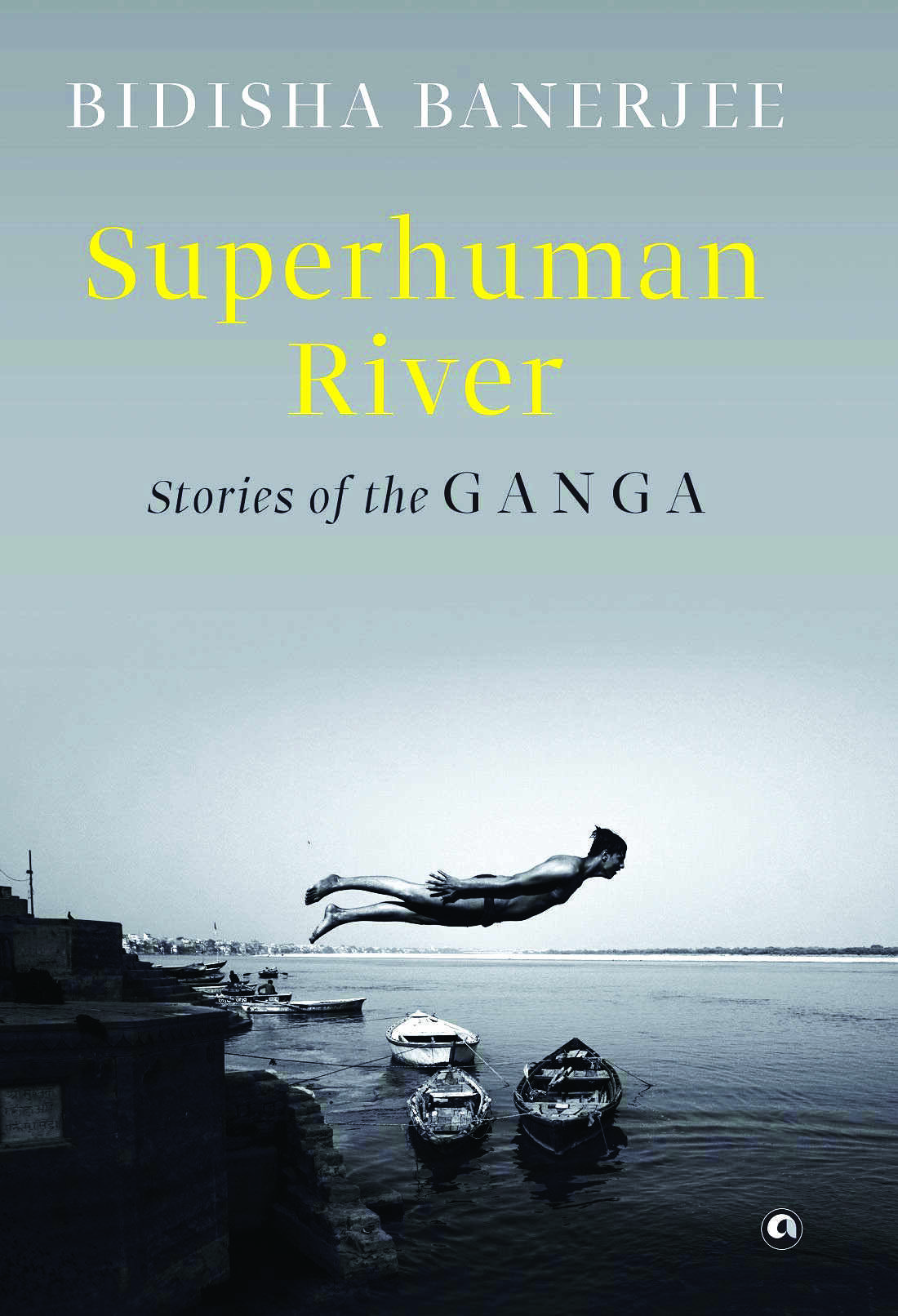 I had to see for myself. So I bought a seat on a train heading from Kolkata to Dhaka, the capital city, approximately 320 kilometres away. The Bangladesh Railways train, after a multi-decade gap in cross-border train service, has travelled between the two countries twice a week since 2008. With its plastic interiors and tiny compartments, it looked like a toy train. The twelve-hour train journey between India and Bangladesh takes about five hours longer than it should because both countries subject passengers to a series of customs checks. As I waited, the compartment door swung open, revealing a vast river swirling below.

After a few minutes, which seemed like a few hours, the train was still crossing the river. Everything about the waterway—its disorienting enormousness, a grey flatness dotted with invasive Brazilian water hyacinths and forlorn wooden boats—resembled India’s Ganga River. But all those reputable maps had insisted that the Ganga does not flow through Bangladesh! Had the train passed through a spatial wormhole while I was reading? Were we somehow back in India? I asked a woman who had asked me to stand guard at the door while she used the toilet. ‘It’s the Padma,’ she said, as if her casual revelation were the most selfevident thing in the world: ‘You know, it’s a branch of the Ganga.’ I knew that the British East India Company had sailed into Calcutta, my birth-city, via the Ganga and made it the capital of their empire. I knew that they had floated logs, opium, and indentured slaves back down the river. I knew that Bengal got its name—Vanga, Vangal, Bangal, Bengal—from the Ganga. I knew what it was like to bathe in the Ganga at Varanasi—India’s holiest city—during a total solar eclipse. I knew that the Ganga had received the ashes of my great-great-grandmother and millions of others. I knew what it was like to wake up from a dazzling dream at the foot of the rapidly-melting Gangotri glacier.

But, as I crossed this other Ganga, I realized how little I knew of the delta that it formed—the world’s largest delta, the Bengal Delta. Its nature had been, to me, as unknown, as half-hidden yet oddly familiar as those Bangladeshi women lip-syncing to folk songs. As the train travelled over the waterscape, I admitted to myself that I had lost the map-war.

I didn’t straighten out the exact details of how the Ganga morphed into the Padma until weeks later. I couldn’t help wondering why so many of the maps contradicted each other. So, in Dhaka, I ended up peering over the shoulder of the hydrological engineer Maminul Haque Sarker as he

possessively looked through rare, old maps of Bengal on his computer. Sarker’s office is in the campus of the Centre for Environmental and Geographic Information Systems (CEGIS) in Gulshan One, a Dhaka 136 Bidisha Banerjee suburb that

none of the city’s quarter-million rickshaws is allowed to enter. Sarker is the Centre’s deputy executive director, which makes him Bangladesh’s deputy chief mapmaker.

Hesitantly, I asked Sarker whether the Ganga flowed through Bangladesh. I felt slightly foolish, like a Mexican asking whether the Gulf of Mexico is American.

Sarker’s response was as shifty and meandering as the river in question. ‘e Ganga doesn’t flow through Bangladesh,’ he said. ‘But the Ganges does’. He explained that technical literature uses ‘Ganges’ for the stretch of river between the village of Khejurtala in West Bengal, near the Bangladeshi border, to Aricha, about 72 kilometres inside Bangladesh. ‘It’s been that way since 1776, when James Rennell first surveyed the river. But Rennell also recorded another name—the Padma’ (padma means ‘lotus’ in many Indian languages with a Sanskrit root and ‘aricha’ was the name of the leaf I ate near Gangotri when I felt nauseous).

‘Locally, the river is known as the Padma from the point where the Ganga forks in two. And, unlike the Ganga, the Padma is not considered holy,’ Sarkar continued. e forking point he was referring to lies in Giria, Murshidabad, in West Bengal, where the Ganga splits into the Hoogly–Bhagirathi and the Padma. e river Padma enters Bangladesh at Shibganj in Chapai Nababganj District.