"The Magnificent Diwan: The Life and Times of Sir Salar Jung I" | Storm in a teacup

Meticulously researched and engagingly written, Bakhtiar K Dadabhoy’s The Magnificent Diwan introduces Sir Salar Jung I to a new generation, even as it rekindles the memory of a man who has become the victim of collective amnesia; Excerpts: In March 1875, it was announced that Albert Edward, the Prince of Wales (who became Edward VII in 1901), would visit India. This was not the first visit by a British royal nor would it be the last: Prince Alfred (the Duke of Edinburgh), Victoria’s second son, had visited India in 1869–70. Prince Albert Victor, the Duke of Clarence, the eldest son of the Prince of Wales, would visit India in 1889. In the 1880s, Victoria’s third son, Arthur, the Duke of Connaught, was resident for seven years. In October 1883, he took command of the army at Meerut and moved to Rawalpindi in October 1885, before his promotion as commander of the army in Bombay, a post he held from 1886 to 1890. Queen Victoria never visited India; the farthest east she travelled was Tuscany. These visits by her sons were important insofar that they made the British monarchy visible, ‘bridging the divide between the virtual sovereignty of the queen and the proxy powers of the Viceroy’.

The trip had been the prince’s idea. Neither Disraeli nor Northbrook had suggested it. Queen Victoria, who had serious reservations on the subject, had not been consulted either. The prince had shared his wish with Disraeli, and The Times leaked the story on 20 March 1875. The queen’s objections to the trip included a concern for the prince’s health and the sheer intensity of the proposed itinerary. She also disapproved of some of those the prince wanted to take with him, singling out the Duke of Sutherland, Lord Carrington and Lord Charles Beresford as especially risqué. The prince enjoyed louche company, and the queen feared for the prince’s morals. Fortunately, she approved of Sir Bartle Frere, the former governor of Bombay, who was organizing the whole trip. But her overriding concern seems to have been that the people in India might think that the Prince of Wales was the monarch and not she. She refused to allow any situation where the prince would take precedence over the viceroy: he was to travel not as her proxy but as a guest of the viceroy.

As soon as it became known that the prince would be visiting India, a number of Indian rulers had asked the government for an opportunity to pay their respects to the future king of England. They also requested the honour of hosting him. The nizam, however, was not one of them. However, it was well known that Salar Jung was in communication with the staff of the Prince of Wales about a possible visit to Hyderabad. The resident and the viceroy were never consulted. It was Northbrook who had to make the first move, asking Saunders to ascertain if the nizam would like to visit the prince at Bombay or Calcutta. Lord Northbrook had planned for the Indian princes to meet the English royal in Bombay. Salar Jung, after consulting with Rafi-ud-din Khan Amir-i-Kabir II, his co-regent, indicated that the delicate constitution of the nizam precluded such a visit.

On 3 August 1875, Salar Jung wrote to Saunders, giving reasons as to why he thought such a journey was inadvisable. He said that apart from his tender age, the nizam had a weak and excitable constitution which resulted in frequent indisposition. The fatigue of the journey and the unavoidable excitements connected therewith were likely to seriously affect the young sovereign’s health.

We have entered into these particulars because if anything occurred to His Highness during such a journey we should be blamed had we omitted this duty, not only by His Highness’s own subjects, but by His Royal Highness the Prince of Wales and His Excellency the Viceroy, who, we have no doubt, entertain kindly feelings towards His Highness.

Salar Jung agreed to lead a deputation composed of himself and Rashidud-din Khan, who would wait upon the Prince of Wales in Bombay. Predictably, the government took umbrage at what was seen as a slight and refused to entertain such a reply. What made matters worse was that the London World announced on 1 September that the nizam ‘refused’ to meet the Prince of Wales, and this erroneous version was promptly telegraphed to India by an overzealous correspondent. This mischievous invention was seized upon by the Indian press, ‘for a series of those minatory diatribes which when directed against our feudatories are so eagerly welcomed by the despotic officials of the Indian Government’.

On 19 August 1875, the foreign secretary, Charles U Aitchison, had written to the resident expressing concern that the delicate health of the nizam would be affected by the trip to Bombay. ‘The Viceroy had hoped that His Highness the Nizam would have been able to take the conspicuous place which belongs to him in connection with the visit of His Royal Highness the Prince of Wales. It will be a matter of regret to His Excellency if the state of His Highness’s health should unfortunately exclude him from participating in the honour which is to be enjoyed by most of the Princes of India.’ Aitchison expressed his happiness to Saunders that the ‘delicacy of His Highness’s health is daily diminishing, and that the last time you met him you found him decidedly more vigorous than on any previous occasion’. He also voiced the hope that if the improvement continued at the same pace, there would be ‘less ground than at present for the unfavourable anticipations which the Ministers entertain...’ Aitchison told Saunders to ask Salar Jung to consider the matter before an answer was sent to his letter.

The proposed deputation suggested by Salar Jung to wait upon the Prince of Wales in Bombay was dismissed out of hand by Aitchison ‘as the duties of the occasion are not such as can be discharged except by His Highness the Nizam in person’. He also indicated that the proposed visit of the Prince of Wales to Hyderabad would also be dropped if the nizam did not meet him in Bombay. Saunders was under the impression that Salar Jung was acting alone in the matter. He insisted on meeting the Amir-i-Kabir II, and wrote to Salar Jung on 1 September 1875, telling him of his resolve to communicate, in person, Aitchison’s instructions regarding the Prince of Wales’ visit to both him and the Amir-i-Kabir II. The interview was granted the same evening.

In his letter on 3 September 1875, Salar Jung reiterated to Saunders that the regents could not take upon themselves the responsibility of imposing such a tiring journey upon the weak and excitable child. He said that they would have been greatly honoured if the nizam could avail of the opportunity of waiting on His Royal Highness, and taken the ‘conspicuous place’ proposed for him in connection with the royal visit, but after taking the opinion of his medical officers (who had attended the nizam all his life and had obtained diplomas from the medical college at the residency), it had been considered most inadvisable to expose the nizam to the risks of such a journey. Salar Jung said that they could not ask ‘any other doctors to give us their opinion as never having attended His Highness professionally they cannot be aware of the peculiar nature of his constitution’. All the doctors testified to the nizam’s weak constitution and the inadvisability of such a long journey. Salar Jung wrote:

We had previously acted on our own conviction as to the state of His Highness’s health, founded on the reports of His Highness’s hakeems; and now as suggested by Mr Aitchison we have taken the opinion of his medical officers... They all concur in saying that it would be most unadvisable to expose His Highness to the risks of such a journey. 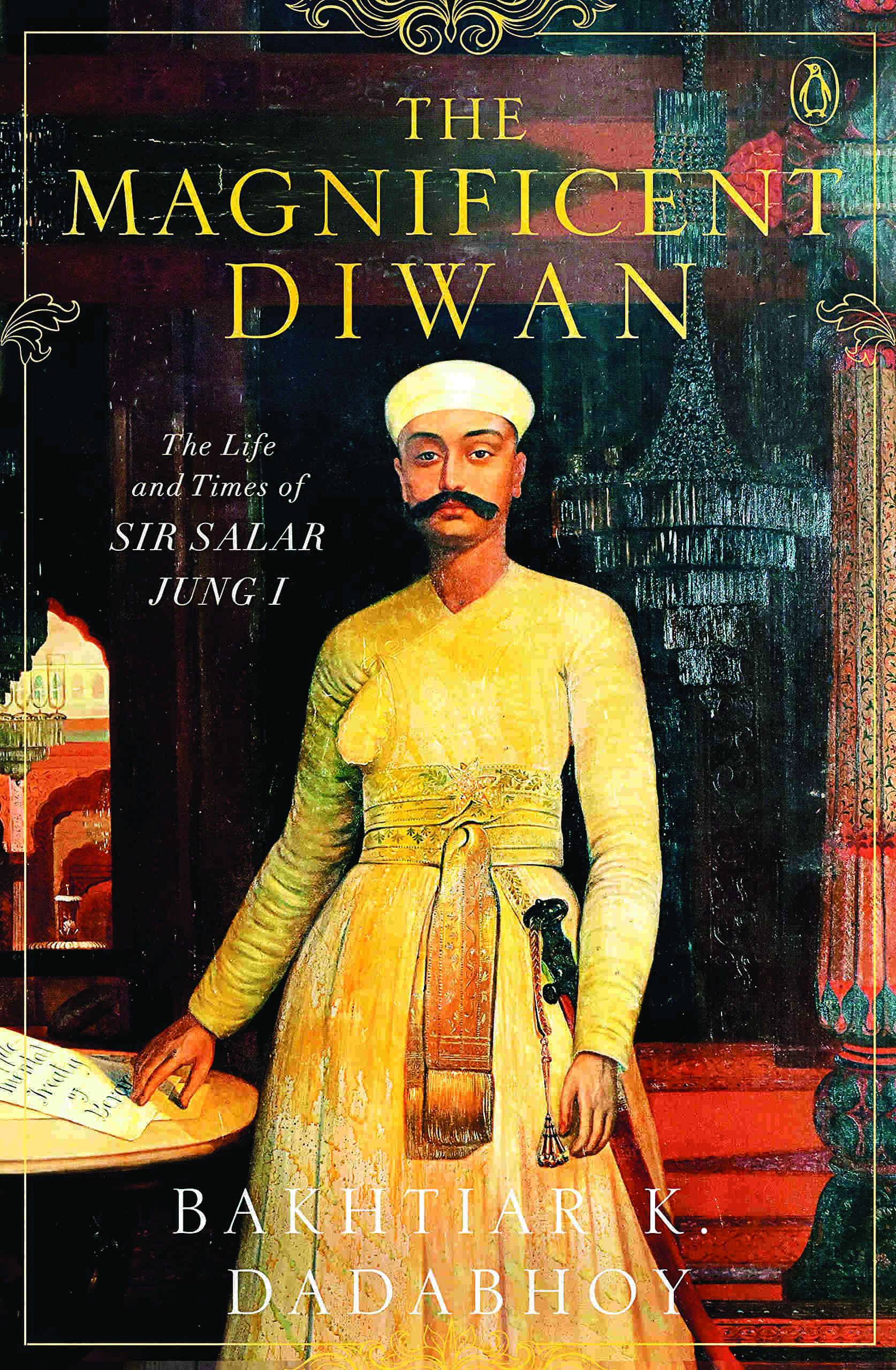 He further added that under the circumstances, ‘we feel that we have no alternative left us but to rely upon the consideration and indulgence of His Royal Highness and His Excellency the Viceroy to excuse His Highness from undertaking a journey the responsibility of which we most sincerely regret we cannot incur’.

Soon after this letter was depatched to the resident, Salar Jung received a visit from the assistant resident, Captain GH Trevor, who conveyed to the minister that his refusal was being viewed in a different light. There was a misconce tion that the nizam was not going because his dignity would in some way be compromised by his waiting on the Prince of Wales in Bombay. In a rebuttal of this view, Salar Jung, in a letter dated 4 September 1875, wrote to Saunders that such an idea had never entered their minds, or otherwise, they would have said so in their first letter on the subject.

A greater honour than that of the nizam paying his respects to the heir to the throne could scarcely be conceived. Salar Jung reiterated this view and regretted that their motives were being impugned. There never had been any intention on their part of slighting the prince, he said; on the contrary, they considered his visit a great honour. While the delicate health of the nizam was a fact, Salar Jung would, in all probability, have opposed the visit in any case because he did not want the nizam to pay public homage to the Prince of Wales as his suzerain. He invoked the aid of the nizam’s grandmother and the Paigah nobles to prevent the trip.

Salar Jung expressed the hope that in a few years’ time, when the nizam was stronger and older, he would be able to pay his respects to the viceroy ‘when the opportunity occurs of his doing so by a journey of two or three days, when the Viceroy happens to be within that distance; and perhaps ten years hence he will be able to proceed even to Calcutta for such a purpose’.

(Excerpted with permission, from The Magnificent Diwan by Bakhtiar K Dadabhoy; published by Vintage Books. The excerpt here is a part of the chapter titled ‘A storm in an Indian tea cup’.)