"Sanath Jayasuriya: A Biography" | Shaping sporting fortunes of a nation

Sending shivers down his opponents’ spines, Sanath Jayasuriya has been the vanguard of Sri Lanka’s ascent as a reckoning power in cricket , discusses Arif Mohammad Before the advent of T20 cricket, Sanath Jayasuriya had given the world the first glimpse of what was to come in the following years. His biography opens with a poem aptly titled That Cyclone Sanath, describing the first instance Jayasuriya went berserk. It was the first game of the Singer Cup at Singapore on April 2, 1996 – Sri Lanka vs Pakistan. Batting first, Jayasuriya was up against the lethal attack of Waqar Younis, Saqlain Mushtaq and others. He took on Aamer Sohail for 30 runs in his first over and went on to record the then fastest ODI century – off 48 balls. 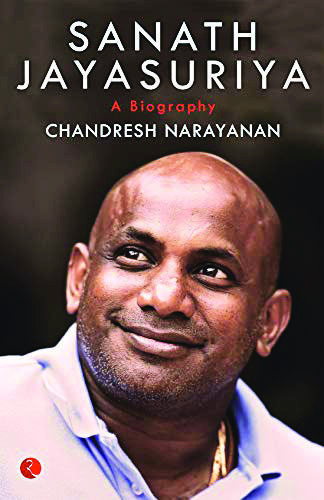 The book travels across eight chapters of lucid narration – from his early cricketing days to opening the batting for Mumbai Indians alongside Sachin Tendulkar. At the age of nine, Sanath was hardly as tall as a bat and would be wearing oversized pads. Adjusting the pads became a habit, which eventually turned into a superstition as he moved on to international cricket. Explaining his superstition, Jayasuriya stated, “I touch a spot on my helmet and both my pads before every ball. Every time I hit a boundary, I have the habit of going to the middle of the pitch and tapping it.”

Jayasuriya donned the national jersey for Sri Lanka B in 1989. Against an opposition comprising Saeed Anwar, Mushtaq Ahmed and Inzamam-ul-Haq, he struck two consecutive double-centuries. He consistently pierced a packed off-side of seven fielders to grab the limelight and earn for himself an ODI call for the Australia series, gradually establishing himself as one of the most explosive openers in world cricket. Jayasuriya is credited for having revolutionised one-day international cricket with his explosive batting – initiating the hard-hitting modern day batting strategy of all nations.

During his ripe years, he was still in contention as one of the key players in the auction pool of the Indian Premier League. He priced himself at 2,50,000 USD but went on to fetch a humongous 9,75,000 USD from Mumbai Indians. In his IPL tenure of 30 matches in three editions, he has justified his reputation with a strike rate of around 150. He has donned various hats – captain, chairman of selectors, politician and also minister. His biography is a mediated insight for anyone who has watched greats hang their boots. In fact, it is a delightful read for all cricket lovers.

The author, Chandresh Narayan, has made keen efforts to draw quotes and statements made by various dignitaries whenever required. He has narrated the entire journey of Sanath from a very neutral stance – keeping intact the spirit of the sport. The book also explores various aspects of his personal life including his stint in politics.

When Rajapaksa was voted out of power in 2015, Sanath made a reverse sweep as he continued in Parliament under the new regime of National Unity. Constant bickering of politics got to him and he finally quit his position in 2015 – realising that this was not his cup of tea. The book is an almost transparent image of Sanath-the man, and lends a deeper insight into the life of the southpaw – one of the greatest batting all-rounders ever.