"When I Was a Boy: Scenes and Stories from My Childhood" | Ruskin’s enduring bond with childhood

With humour and seamless writing, Ruskin Bond strikes a chord yet again – this time, lending a glimpse into his childhood and gradual becoming; discusses Proloy Pal Before I start writing this review of When I Was A Boy: Scenes and Stories from My Childhood, I would like to make a confession.

For many years now, I have been a super-fan of Ruskin Bond. So, in spite of my best efforts to be fair and objective for the reader’s sake, I may inadvertently end up being a wee bit generous to the author. Having made this admission, I assure the reader that I will do my best to remain impartial and non-subjective. 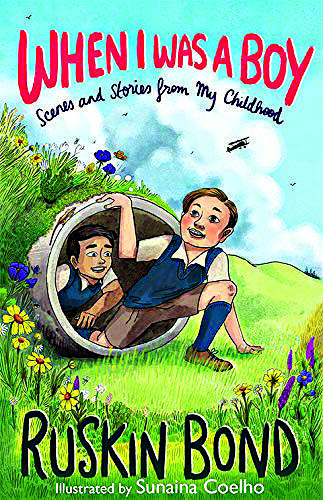 The look and feel of the book – which is of the highest quality matching international standards... the texture, bright colours, elegant fonts and large point size... all garnished by a superb set of illustrations by Sunaina Coelho – may give many people the (wrong) impression that it is meant for children only. Yes, it certainly is a gem of a creation for children. But it will be equally enjoyed by adults.

In fact, it is a piece of work that transcends age and will be lapped up by almost anyone and everyone – by small children, by teens, by those in their 20’s and later youth, by the middle-aged, by the aged and, yes, by the very very aged too! It will be relished, savoured and re-savoured by almost everybody from five years to 100-plus.

When I Was A Boy: Scenes and Stories from My Childhood will rank as yet another masterpiece from one who has already fashioned more than enough masterpieces for one lifetime, and now, in his mid-80’s, still has an unquenchable thirst to do more.

How lucky for us Ruskin Bond aficionados and enthusiasts!

I don’t want to risk depriving the reader of the excitement and sheer aesthetic pleasure of going through such a remarkable book. So, I will not venture to narrate the hilarious events and episodes s/he will be treated to by Ruskin Bond one s/he starts reading When I Was A Boy: Scenes and Stories from My Childhood.

Going through it is like embarking on a magical journey back in time to the 1930s, 1940s and early-1950s. Bond begins with his birth in 1934 and vividly describes his first memories when he lived with his parents in Jamnagar. He then details in lyrical, poetic prose his remarkable stay in Dehradun.

There is also a wonderful year in Delhi with his father in 1942-43, which he refers to as the best year in his life. Ruskin Bond’s father was an officer with the British Royal Air Force (RAF) during World War II and was separated from his mother at the time he went to Delhi to live with him.

After an idyllic year-and-a-half in Delhi, Ruskin had to be away from his father as he was stationed in Calcutta, Karachi and other places. Ruskin describes himself as uniquely lucky to have a father who was also a great friend.

Ruskin was then sent to boarding school in Shimla, where he soon learned that his father had passed away in Kolkata. In his own words, his whole world came crashing when one of his teachers at the Shimla school took him out to a bench and quietly broke the earth-shattering news.

It was a colossal loss for the boy Ruskin and led to a vacuum which exists to this day. Ruskin also learned from this experience the cold truth that individual sorrows hardly matter to the greater world which carries on with life as usual.

After this, Ruskin describes his continuing school and hostel life at Shimla, interspersed with vacation visits to his mother, step-father and half-siblings in Dehradun.

Bond’s affinity to nature is so overwhelming that throughout the book, one feels he can smell the flowers, breathe the air, hear the birds chirruping, see the colours.

One of the added attractions of When I Was A Boy: Scenes and Stories from My Childhood, is that it gives you the full historical flavor of the years before, around and after the partition of 1947. It gives a heart-rending, poignant account of the pain of sudden and permanent separation – when many of his school-boarding mates are sent off (under the protection the British army) to Lahore, Rawalpindi, Peshawar and other places in Pakistan.

Ruskin comes across as a child – and human being – with a profound difference. He had, by his own admission, an innate dislike for regimentation. He obviously could not stand cold, purposeless discipline.

Though he does not come across as one with a great liking for school, he loved his school mates, especially the naughtier, livelier and more vivacious ones. After he completed school, his family made arrangements to send him to an aunt in Britain, where he stayed for four years and wrote his first book The Room on the Roof.

But he came back to India, lived in India, worked in India.

And today – at 84 –he still remains the boy we read about in When I Was A Boy: Scenes and Stories from My Childhood.

Have a great read!