The maze of bureaucracy is intimidating to navigate for the casual observer, TR Raghunandan obliges such an observer with a hard but approachable look at Indian Bureaucracy , writes Amitabha Bhattacharya The manner in which the recent political drama in Maharashtra unfolded may have had high entertainment value for the citizenry, but there were certain signs that do not portend well. We generally enjoy such drama, having been used to it over the decades, and do not take it seriously for two reasons. First, we know that irrespective of the party or coalition on the driver’s seat and independent of the rhetoric used and moral stance taken, not much difference is going to be made to our day-to-day existence. Second, linked to the first, is an inherent belief that administration-- reflected through the working in government and private offices, banks, courts, schools and colleges, factories and other organisations-- will continue to run largely unhindered at a low to moderate but a predictable level of efficiency. Some amount of public faith is thus inherent in the functioning of our governance machinery. 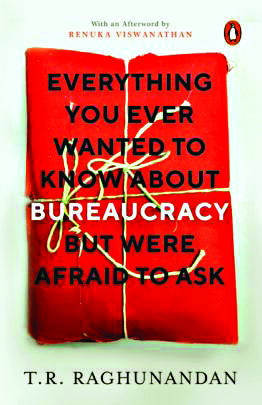 Has this faith been jolted? Importantly, what has been the role of the higher bureaucracy, composed mainly of officers belonging to the Indian Administrative Service (IAS), in this episode? Have the senior mandarins in the offices of the President, Prime Minister, Cabinet Secretariat and the Home Ministry at the Centre and in the offices of the Governor, Chief Minister and the concerned department of Maharashtra discharged their duties to the best of their conscience? What is the degree of thinking space available for senior bureaucracy in our evolving political system? Without accessing the notings in the relevant files, the truth will never be known. However, it can be presumed that all the rules in the book have been followed and the political direction complied expeditiously. Is hurried legal compliance enough to instil public confidence? In the context of differential expectation from the political and administrative leadership, larger questions of ethics and morality cannot be wholly ignored.

In an insightful book Everything You Ever Wanted To Know About Bureaucracy But Were Afraid To Ask, T.R. Raghunandan, an IAS officer who resigned from service after twenty seven years, raises crucial issues like ethics and the IAS, the civil services and leadership and such like. These issues are integral to the lives of citizenry. While the civil services have been successful in helping maintain the unity, integrity and diversity of our land, their record in most other areas leave much to be desired. One has to look for the reasons, especially if the country has to achieve a sustained double-digit GDP growth rate over the years to come.

Raghunandan runs through the conduct rules for members of the higher services explaining the rationale and even the limitations of such rules. While “Slackening of duty, habitual non-performance and seeking directions unnecessarily… are all deemed to be considered as ‘lacking of a devotion to duty’, the officer is mandated to always act in her own best judgement to be true and correct.” The dead-wood elements are clearly identifiable, and in recent times, are being retired out, but the ‘over complaint’ ones masquerading as ‘super-efficient’, refusing to use their own judgment at times of crisis or urgency are often rewarded by the system. How many civil servants show courage, defined by Hemingway as “grace under pressure”? How much does intellectual honesty really matter? Analysing the state of higher bureaucracy in India, Raghunandan shows how the intellectually dishonest who may not be so in a financial sense, “are the most favoured by corrupt senior officers and politicians”.

Who are then to provide leadership? In a fascinating chapter titled The Civil Services and Leadership, Raghunandan problematises the issue and, basing on the most authoritative sources, contextualises and analyses every facet of it. As he rightly observes in the hierarchical context of governmental structure, the civil servant is to proffer advice to the political executive and based on the latter’s decision, to execute it, keeping in mind that her “first allegiance is to the Constitution, as it is the overreaching expression of decision of the political executive, then to the law, then to rules and other forms of decision”.

What is needed, therefore, is systemic improvement where ‘most of the opportunities for maverick individual leadership will fade away’, where true leadership facilitates the creation of space for teamwork and members of the team motivated to perform ‘small, but significant acts of leadership.’

Have our civil servants discharged their leadership functions well? Have the services produced inspiring leaders of millions of government employees working under their supervision and control? The answer is not difficult to fathom. While there are numerous instances of outstanding bureaucrats who served the nation well, much of their success often rests on their individual brilliance and initiative. Only a few of them have left behind a legacy that has sustained on account of the systemic innovation engineered by them. Members of the IAS in particular have often fed their ego-needs, sought to protect their turf, and as Raghunandan argues, have not wholeheartedly worked towards decentralisation of power and authority to local or district level formations as the 73rd Amendment to the Constitution envisaged. The IAS, as a class, failed to appreciate the national regeneration that could have been triggered by true decentralisation with significant alteration of political power structure.

Watching the ways of executive functioning at every level and at the same time, aspiring for a five trillion dollar economy in the next few years - keeping the democratic, federal and secular norms largely undented - one has to seriously ponder how the politico-administrative set up can be cleansed and rejuvenated. Raghunandan’s kind, witty, perceptive and practical book is a timely reminder, raising the pertinent questions. He also seeks to convincingly attempt some answers.