The book provides a critical analysis of the politics within PoK, throwing light on the genesis and evolution of various political parties and interest groups; discusses Amitabha Roychowdhury A major political aspect that has engaged the attention of the watchers of Pakistan-occupied Kashmir (PoK) for quite some time has been the gradual domination of Pakistan’s mainstream parties which have slowly but definitively tried to gain political control over these disputed areas by eclipsing the local and regional parties. There has been no doubt that these mainstream parties owe allegiance to the Pakistani establishment and its control over this mostly hilly region that comprises the PoK (known locally as ‘Azad Kashmir’ or AJK) and Gilgit-Baltistan. 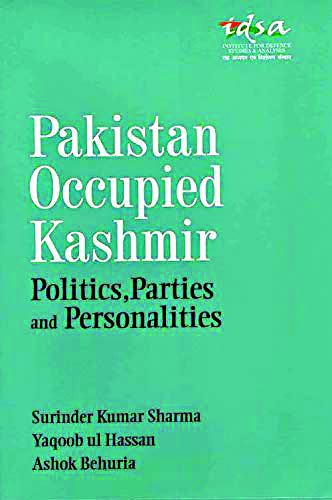 Another aspect of the impasse faced by the people of Gilgit-Baltistan is Pakistan’s move to grant the region the constitutional status. This has not only generated a heated debate within the region but also led to large-scale protests by the locals. The nationalist leaders of Gilgit-Baltistan, as well as the leaders of PoK, have condemned Pakistan’s move to fully integrate Gilgit-Baltistan as a province. Several Kashmiri separatist leaders have opposed this merger of Gilgit-Baltistan maintaining that the move will provide a justification to India which has revoked the special status of Jammu and Kashmir and enable it to further consolidate the process of integration of the state into the Indian Union.

These issues have been brought to fore in the latest book Pakistan occupied Kashmir: Politics, Parties and Personalities, published by the Institute for Defence Studies and Analyses (IDSA), a premier official strategic think tank. Authored by three eminent IDSA scholars and keen AJK watchers – Surinder Kumar Sharma, Yaqoob-ul-Hassan and Ashok K Behuria, the book provides a critical analysis of Gilgit-Baltistan and the PoK regions and the prevailing political situation there.

A common feature that exists in the political scenario of these regions is the two sets of political entities – one, the mainstream parties supported by the Pakistani establishment and the other, the local political parties and groups. The former set of parties has the wherewithal to fight and win elections, while the latter is generally small in their outreach and financial strength which makes them poorer in terms of even contesting elections.

The fact is that neither of the mainstream national parties has cared for local needs and grievances so far. A clear example of this was when an earthquake struck PoK in October 2005, killing thousands and rendering a large segment of the population homeless. Instead of providing help to homeless people, the leaders of the mainstream parties fled to Pakistan and returned when turned normal.

Initially, Pakistan supported the Muslim Conference’s rise to power which was founded by Sheikh Abdullah in 1932. He, however, secularized this party in 1939 by renaming it the ‘National Conference’. But the Pakistani elements had their way and retained its original name – the Muslim Conference. As a protege of Pakistan, the Muslim Conference has ruled PoK with loyalty to Pakistan’s agenda in Kashmir but without any commitment to the local people.

The Muslim Conference’s monopoly began to crack in 1975 when Pakistan People’s Party (PPP) captured power in the first elections held under the 1974 Interim Constitution. The PPP government was thrown out when General Zia took over in July 1977. Eventually, the Muslim Conference, as a proxy of the Muslim League, and the PPP became the two main political parties which alternately won the elections.

But Muslim Conference cracked due to inner dissensions, mostly because of rampant corruption and being badly riven with intrigues and rivalries that its revival seems impossible. In the July 2016 elections, it could win only three of the 41 seats. Its supreme leader Sardar Abdul Qayyum died on July 2015. His son Sardar Attique was allegedly involved in massive corruption and malpractices.

The second major party, the PoK chapter of the PPP which was in power during the elections, was hit by a massive wave of anti-incumbency sentiments and was routed in the polls, securing just two seats.

To sum up, all the 44 local political parties registered with the ‘AJK’ Election Commission have an uncertain future. Besides the Muslim Conference and AJKPPP, parties like Jamaat-e-Islami and Muttahida Qaumi Movement (MQM) are electoral lightweights. Imran Khan’s party Pakistan Tehrik-i-Insaf could not make its base.

As far as the future of political parties in Gilgit-Baltistan is concerned, the trend there is not different from ‘AJK’. It has not been in the interest of local politics in both the regions of PoK, because it was never the intention of Pakistan establishment to let a viable political system grow in these two parts of occupied Kashmir, the book reveals. There is discontent among the masses as no concrete steps have been taken to ensure the people of both the regions of their basic rights. The local regional and nationalist parties or groups complain of harassment of their leaders and workers as hundreds of false sedition cases have been slapped by Pakistan security agencies. While those political parties pledging their loyalty to Pakistan are allowed to operate, those advocating autonomy are tolerated. But those demanding independence or genuine autonomy are barred from contesting elections.

These issues have been dealt with in considerable detail in the book, which also a critical analysis of the wide-ranging and contentious matters facing the disputed regions of ‘AJK’ and Gilgit-Baltistan, ranging from the Karakoram highway and sectarian movements in the region to local politics, governance and corruption. The book, a first-of-its-kind compendium, carries details on all political parties and groups and their leadership, giving an overall insight into the socio-economic and political paradigm.