"Tools and Weapons" | Peril of the digital age

A captivating narrative from the cockpit of one of the world’s largest and most powerful tech companies, Microsoft, as it finds itself in the middle of some of the thorniest emerging issues of contemporary times; elaborates Vissa Venkata Sundar Microsoft faced one of the defining Antitrust cases by the US Department of Justice in 1998. A phase of turbulence and long-drawn-out legal fights ensued with the regulatory agencies. The company was on its knees and on the verge of being split up for the strong-hold and monopoly it established in a short time. Before it could be achieved, Microsoft saw its once invincible market share erode, because of the old-fashioned competition. As a result, the ruling lost its relevance. 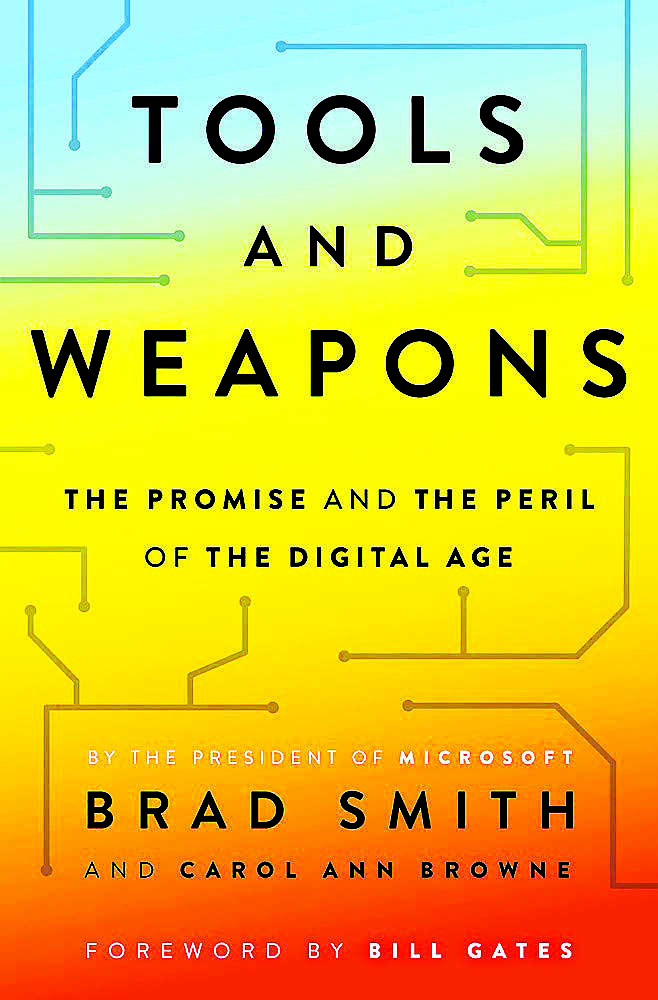 What if you get to hear a fly-by-wall account of this and more from one of Microsoft’s senior executives on how they navigated the firm from the choppy waters? Then, look no further and grab this book. The book is fascinating partly because it is a “Microsoft memoir” and partly, a treatise on the digitalisation of the world and the associated promise and perils of it. It is unusual for a technology firm executive to take to digital activism, after many years of fighting legal battles for preserving the firm from the aggressive regulator.

The newfound realisation that technology is not an end in itself, is a welcome change. Many thinkers and intellectuals have been saying this for decades now. The tech sectors obsession with disruption and growth at any cost, unfettered by any regulations and side by side agog political class keen on photo-ops with the poster boys of the tech world, perplexed technocrats and clueless media playing the role of cheerleaders with no cogent critique or oversight, has been the highlight of this past decade, in idolising and hyping the technology sector.

How to manage the technology that is bigger than ourselves is the looming question the book deals with. It presents a narrative interweaved with historical analogies, legal and geo-political contexts to provide a captivating account of the events in the tech sector in the recent decade. Issues such as surveillance, technology and public safety, privacy, cybersecurity, social media, digital diplomacy, AI and ethics all are covered in the book. The interesting highlight of the book is that the author traces historical links to the present-day problem and interprets the legal framework to make sense of current predicaments.

It is also refreshing to read that a siren call is being made to assume more responsibility by the technology sector. The “insider” experience of the author and insights shared in the book makes for compulsive reading. However, the book seems a little rich in self-glowing references of Microsoft, its decisions and the overall journey.

The book attempts to challenge the existing tech leaders to be responsive to criticism and ethical dilemmas. The book also believes in collaborative efforts between the technology sector, governments to create institutional frameworks to safeguard and uphold the human rights and fair and just digital future.

The narrative considers “data custodianship” as a non-negotiable concept in the privacy world. And views the holders of personal information (technology firms) to be akin to banks and that they have a duty to safeguard their customers from theft and seizures from governments.

Interestingly, the book also makes a case for co-operating with the enforcement agencies to deliver information regarding suspects. It talks about how they traced within flat 15 minutes about Paris attacks (2015) terror suspects and passed the information to the agencies upon request.

The author suggests, “Ultimately, well-informed and broad-minded leadership needs to translate into more proactive step at individual tech companies and also more collaboration across the tech sector. Compared to many other industries, the tech sector today is often fragmented and even divided when it comes to trade associations and voluntary efforts. Given the diversified nature of technology and competing business models, this isn’t altogether surprising. But even with ongoing differences, there is room for the tech sector to do more together”.

The book makes a strong case for regulation. “While there is an enormous opportunity for individual companies and the tech sector to collectively do more, it’s impossible to conclude that this can relieve governments of their responsibility to do more as well…since the dawn of the industrial revolution are devoid of any major industry successfully regulating everything about itself completely by itself. It would be naive to think the first successful case will emerge now”.

One of the resounding points the book makes is, “The sweep of technology issues impacts virtually every aspect of our economies, societies, and personal lives. In the democracies of the world, one of our most cherishes values is that the public determines its course by electing the people who make the laws that govern us all. Tech leaders may be chosen by the public. Democratic countries should not cede the future to leaders the public did not elect.”

Tools and Weapons is thoughtful and persuasive. It also adopts non-technical language to make it more accessible to the wider audience. The book makes a strong case about the technology sector and companies to accept social responsibilities and not be excessively worried about regulation. Regulation is coming – like it or not!