"Plassey: The Battle that Changed the Course of Indian History" | Of loss and resilience

Using multilingual sources and a multidisciplinary approach, Sudeep Chakravarti revisits the battle of Plassey with great insight and nuance – impeccably researched and brilliantly narrated, Plassey is the best account yet of the battle that changed the course of Indian history; Excerpts: In the Ain-i-Akbari, a record of administration during the reign of the Mughal emperor Akbar, what would become the enclave of Calcutta is mentioned as a ‘rent-paying village named “Kalikatta” under Sarkar Satgaon’. The year was 1596, as Maulavi Abdus Salam, the translator of Riyazu-s-Salatin, a history of Bengal from the first Turkic conquests in the thirteenth century through the early 1770s, observes in a footnote. He writes that in 1686, ‘in consequence of a rupture with the Musulman authorities at Hughli port, the English merchants, led by their Chief, Job Charnock, were obliged to quit their factory there and to retreat to Sutanati [now a northern quarter of Calcutta].’ Charnock and his colleagues would for a while retreat southward from Sutanati too. The retreat was the continuation of the fallout of a major disagreement with the governor Shaista Khan, which led to his taking over the Company’s Qasimbazar factory and Charnock’s narrow escape to Hugli – which we read about earlier. 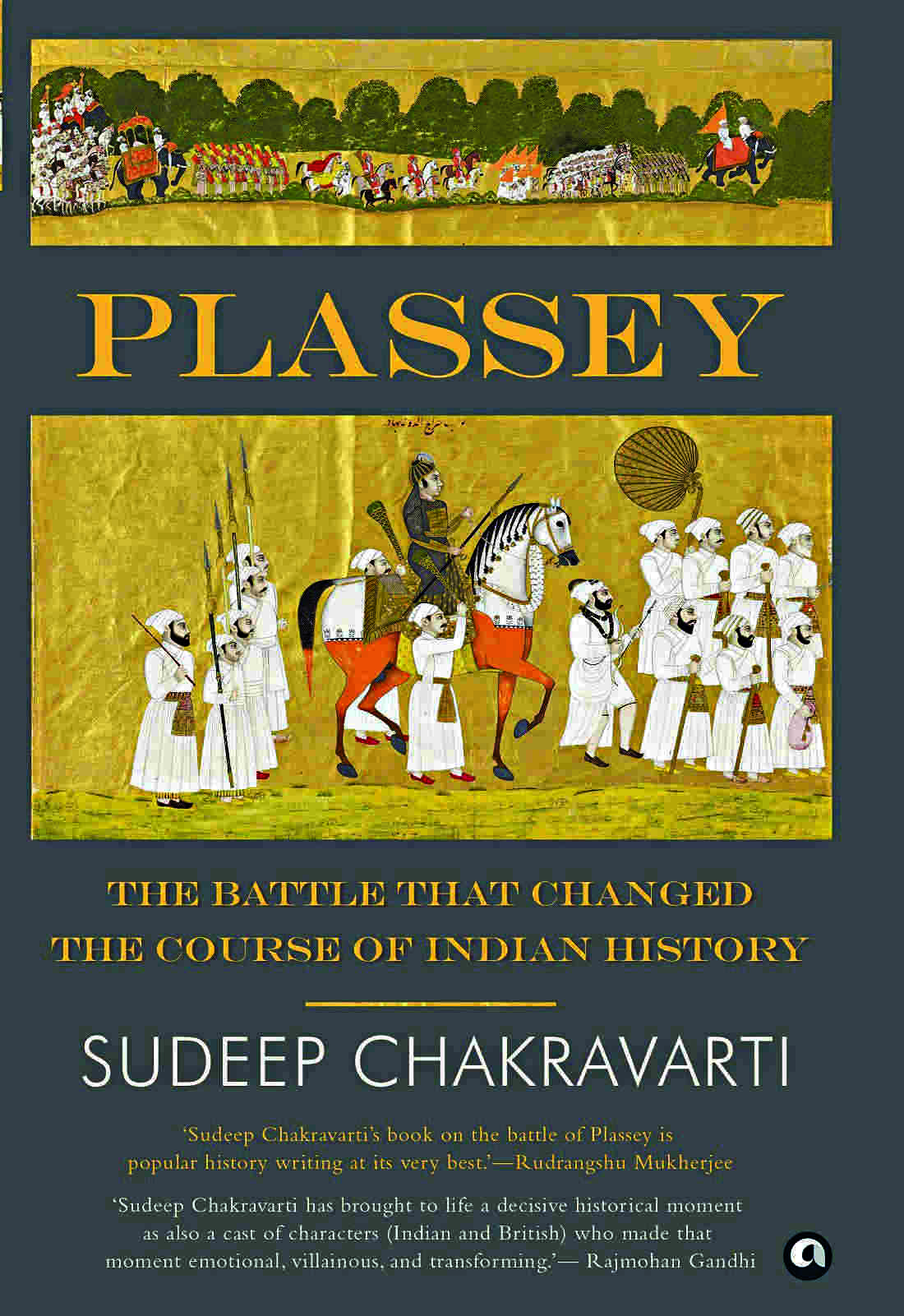 The new settlement soon extended itself ‘southwards’. It first absorbed the village of Kalikata – between the present Customs-House and the Mint’: ‘now’ and ‘present’ being the early 1900s when the translation of Riyaz was published. The settlement then absorbed the village of Gobindapur, ‘which existed to the south of the present site of Fort William’.

In 1689, a year after Shaista’s departure from Bengal, it would become the Company’s headquarters in Bengal, the ritual completed with the Company flag unfurled there in 1690 – usually considered the year of Calcutta’s birth. In 1696, construction for the original Fort William would begin, more than fifty years after the establishment of Fort St George in Madras, an indication of the primacy of the Company’s Madras presidency over that of the Calcutta Presidency, which would last until Plassey. (Calcutta would remain the centre of Britain’s subcontinental empire until 1911, when the decision was taken to shift the capital to Delhi.) A refurbished fort replaced the original Fort William in 1742 – Siraj would attack this one.

Charnock is usually portrayed as the founder of Calcutta. Posterity would dispute this, holding that Charnock, who went somewhat ‘native’, evidently besotted with his common-law Indian wife, wasn’t the one. In 2003, a bench of the Calcutta High Court dispelled that assertion on the basis of litigation in the ‘public interest’ by a group of descendants of one of the ‘original’ families which petitioned the court as Sabarna Roychowdhury Paribar Parishad. The Court’s sesquicentennial souvenir of 2013 notes:

In May 2003, the High Court accepting the report of an Expert Committee of Historians headed by Prof. Nemai Sadhan Bose, held that Calcutta does not have a ‘birth day’ nor one simple ‘founder’. It was a process in the 17th century in which Charnock, who settled in Sutanuti, Eyre and Goldsborough, on Englishside, and Lakshmikanta Majumdar who developed the tract; the Sett and Bysack families who lived in Gobindapur, and Sabarna Choudhuri who sold the villages to the English were all involved in the process of establishing Calcutta.

Charnock’s location, even if pestilential, and several bends down the river from the original trading station at Hugli, would prove to be a strategic master stroke. From being north of Chandannagar, a potential French choke point, the British were now to the south of it. With Fort William and the settlement, Calcutta was the southernmost of the settlements of any European nation on the river. The merchant and military shipping of every nation moving upriver from the mouth of the Hugli at the Bay of Bengal to Chandannagar, Chinsurah, Bandel, Srirampur, even shipping under the direct protection of the nawab of Bengal after relocation of the capital of Bengal subah from Jahangirnagar to Murshidabad, would have to pass the British at Calcutta. And downriver too, of course. To the east lay the great Salt Lake, a

natural barrier. Even factoring in the initial surge of Siraj, and threats from the French and, briefly, the Dutch, Calcutta, a place of swamps, mosquitoes, and disease, would over the years prove to be far from Charnock’s Folly for Company and Crown.

Calcutta was a continuous work-in-progress, and its environs for Company-wallahs a series of discoveries. The tributaries and distributaries of rivers, channels, the sinews of commerce, and the Bhagirathi–Hugli, its winding backbone, were part of this evolution of new places, and quirky names for new places quite in keeping with the tradition of quirky names in Bengal. At a meeting in Calcutta in December 1754, Company brass expressed surprise at several such—‘where are they?’—along, and off, the Hugli when the time for an annual survey came around: Fisherman’s Creek, Hangman’s Point, Mingo Bibby’s Creek, Dean’s Town, Dover, Rogue’s River…

Within a few decades after Charnock’s move, Calcutta had become a thriving town of grand buildings in its aspirational White Town, with the northern and eastern peripheries of Black Town forming a sort of support and strategic buffer similar to Fort St George in Madras. Even with all the irritations of the location, commerce prospered. Perhaps more so the lifestyle of Company employees.

Indeed, matters had slipped to such a dissolute level that the Company mandated a behaviour code for its officers. We learn from Long’s compilation that ‘Covenanted servants were ordered in 1754 “to attend office from 9 to 12 in the morning, and in the afternoon when occasion be”. They were also recommended a more frugal manner of living, indispensable for early hours at office. An early ride at day-break, breakfast at 8, office from 9 to 12, dinner at 2, sleep, tea, ride, visiting and supper filled up the day at that period.’

The good life had permeated even to lowly ‘writers’ – clerks – the Company’s most junior employees in India who were expected to be ‘regularly bred to writing, accounts, French and other accomplishments’. They were often disciplined over their luxuries. ‘Palankins, horses or chaises were at first prohibited to writers going to office, under pain of dismissal from office, but they were afterwards allowed in the hot and rainy seasons,’ Long notes. He also notes that they received ‘frequent wiggings’ from the Court in London regarding their ‘loose hand’. As the Court pointed out, ‘the books, papers and accounts with regard to method, as well as writing, are faulty to a degree we are quite ashamed of’, that ‘their copying is done in such a hurry, that in general it is unfit to be seen, and many parts are scarcely legible’, and that ‘Consultations for these several years past wrote in such a vile manner as not to be legible in many places.’

(Excerpted with permission, from Plassey by Sudeep Chakravarti; published by Aleph Book Company. The excerpt here is a part of the chapter titled ‘The Conflict in Calcutta’.)