"My Prison Diary" | Notes from prison With Jai Prakash (JP) Narayan’s My Prison Diary in hand, I am transported to another time. Written in 1975, this famous biography was conceived during JP’s imprisonment in Chandigarh jail. It revolves around stories of the Emergency and JP’s subsequent loneliness, while also reflecting upon the political changes sweeping through Indian society. JP’s memoir is important in that it is one of the very few texts that have been conceived and written by inmates while serving their time behind bars – it, thus, lends dual emphasis on theories of imprisonment while also focussing on personal turmoil when ripped of basic independence. 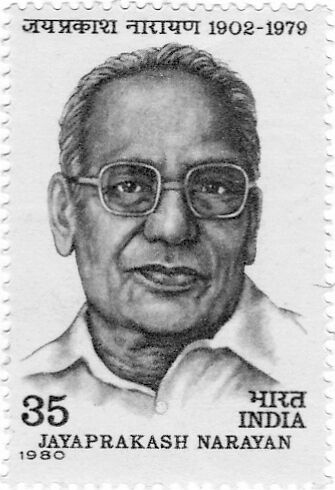 In the foreword, Lakshmi Narayan Lal enforces that this book is a reflection of the changes influencing society at that particular time. JP emerged as a clear leader of the masses and efficiently led the movement that ultimately resulted in the resignation of Indira Gandhi. Interestingly, this book has a number of poems penned by JP for the first time.

With the announcement of Emergency on June 25, 1975, JP was arrested at midnight from Gandhi Shanti Pratishthan and taken to Sohna, Haryana. He was kept in a guest house where he met Morarji Desai, who too had been arrested on charges of sedition. JP spent three days in this particular guest house and on July 1, he was deported to Chandigarh, where he stayed till his release on November 15, 1975. Reflecting upon his own mental state in the opening lines of the book, JP writes, “I do not know whether I will be able to see a better period in my life ever or not, maybe my next generation could.”

On July 26, he writes, “I have spent almost a month today in this particular prison and I would like to add that this one month has been equivalent to spending one full year in prison. I am feeling this because I have not been accustomed to going to jail as frequently as I am now.”

The four-and-a-half months that he spent in this particular jail brought significant changes in him, he was frustrated and left feeling completely alone. One particular sentence written by JP is enough to reflect upon and empathise with the condition of an imprisoned person. In his letter to Indira Gandhi, he especially requested her that he be allowed to meet at least one person a day for an hour so that he could speak his heart.

Even though the district magistrate, doctors and nurses were allowed to meet him, they were not allowed to converse with him on anything other than his health. JP requested the government to allow him to stay with someone he could share his stories with but nobody responded to his request. With utter sadness and disappointment, he commented that if the government wanted, they could send any one of the protesters from across the country to stay with him in Chandigarh, but that did not happen. He had written at one point:

“The government’s behavior towards me was worse than that of the British government. During the protest of 1942, when I was taken to the Lahore Fort, I had to stay alone for the first few months. I requested the government to provide me with a companion. Finally, the British government responded and later when Dr Ram Manohar Lohiya was brought to Lahore Fort, I was granted the permission to interact with him for an hour every day.”

Forced to stay alone in a single room, considering his nature, was the harshest punishment for JP. He was kept under house arrest in a room on the third floor of Government Post Graduate Medical College. A ward of this floor was under complete police surveillance. The room where he stayed had a single-bed and an attached washroom. The room was locked and guarded 24*7 while the police were deployed all through the day. It seemed that the government feared that 74-year-old JP would break the wall of the jail and run away.

JP’s relatives were allowed to visit him but only after enduring several layers of security checks. Apart from the bed, the room just had a table and a chair. There was a fan on the roof, a cupboard and three more chairs. Outside the gate, a red light blinked continuously.

JP writes, “Under the British government, I personally did not experience the effects of tear gas and lathi-charge. After my release from Agra Central Jail in April 1946, I was never arrested again or taken to jail. One of the reasons that a month felt like a year to me was because of the loneliness that I was subjected to. With permission to interact with other inmates of the jail, the situation would have been different.”

The book goes elaborates upon the controversial political environment pervasive through the Emergency. At that time, it was through The Tribune that JP got news of events and uprisings across the country.

In recent times, debates around human rights have ushered major changes in jails. However, despite these changes, loneliness is plaguing a large number of convicts and undertrials serving their time in India’s many prison structures. In overpopulated jails, the stories of those fighting loneliness usually go unheard and unacknowledged.

(JP Narayan’s ‘My Prison Diary’ published by Rajpal & Sons – from which the writer has reviewed – is available for a nominal price of Rs 10 at most book stalls in Kashmere Gate and Dariyaganj, New Delhi)