The book presents a captivating narrative on riverine infrastructure and development – of paramount importance today as India seeks to balance development with conservation; discusses Ajanta Paul History of Canals in Bengal by Himendusekhar Banerjee is a must-read for scholars, policy planners, government officials, environmentalists and lay people working to improve riverine traffic, canal navigation, infrastructural transformation, modernisation of agriculture and the opening up of the rural hinterlands of eastern India with a particular focus on Bengal. 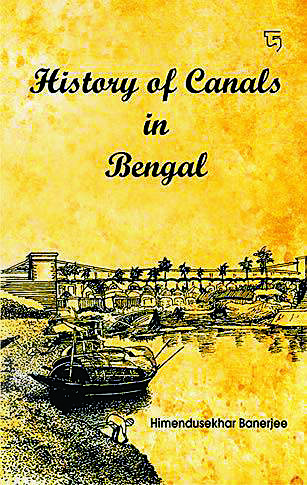 The comprehensive Introduction, Bengal: A River Dominated Delta – which recapitulates the river-dominated geography of eastern India – delves into the ways in which the changing courses of the mighty rivers of this part of the Indian subcontinent have affected patterns of settlement and socioeconomic life therein.

In the first chapter, Why Does West Bengal need to revive her Canals?, Banerjee analyses the rationale behind the need to preserve the inland water bodies of West Bengal. He shows through statistics the benefits that can be accrued from such an initiative, citing among others the boost in artificial irrigation and structural development that, in turn, would lead to enhanced trade, tourism, fishery and horticulture development as well as the regulation of climatic excesses of recurrent flood and drought. It would also, as Banerjee has stressed, impact favourably the ecology in and around Kolkata, helping to preserve the East Kolkata Wetlands and the biodiversity of the region.

The second chapter, Kolkata and the Eastern Canals, substantially extends the argument that seeks to establish the contribution of canals to an increased effectiveness of riverine conveyance, the burgeoning of internal trade, the opening up of the hitherto locked away interiors of rural Bengal and the gradual metamorphosis of Calcutta into a metropolis. Banerjee has also, in this context, looked into the role of the government in conserving the canal system, and the progressive disuse of the same in the face of stiff competition from the railways which was promoted by the British for their shortsighted political and economic ends. In a later chapter, Banerjee reiterates and rues this development noticing “a gradual gravitational change of commercial centres from river banks to railway lines.”

The third chapter, The Orissa Canal System, as its name suggests, deals with the Orissa, Midnapore and Hijli tidal canals that together comprise the mentioned system. The author details the exigencies these canals were designed to address, providing a vivid description of the dams and embankments that had been built to tame the power of the rivers in the region and regulate the distribution of water, thus, preventing floods, droughts and their inevitable outcome, dislocation and famine. Banerjee has further dwelt on the impetus to navigation provided by these canals between Cuttack and the sea coast on the one hand, and Cuttack and Calcutta on the other, thereby, breaching (to some extent) the geographical isolation of Orissa in those days.

The fourth chapter, History of Commercial Navigation by Steamboats along the Eastern Waters, is a delightful discourse on steamboat navigation on the canals of the eastern region, particularly in undivided Bengal in the nineteenth century. It is an example of original research which culminates in important findings. The author successfully collates evidence to prove that navigation of the eastern waterways bridged the inaccessibility of the remote villages by linking them to larger points on the map, and also helped in the commercialisation of the processes and protocols of the growing and marketing of agricultural produce – thus, demonstrating the organic connection between these related spheres and the need to maintain a holistic balance between the natural and man-made worlds.

The fifth and last chapter, Boats and Boatmen of Bengal, is a captivating account of the history of river traffic in Bengal, chronicling the variety of crafts in terms of design from the humblest bark to the most splendid argosy, the types of vessels (as directed by their use) from the ‘Malini’ for large cargoes, the ‘Oolak’ or common baggage boat, the Dacca ‘Pulwar’ manned by Muslim boatmen, the ‘Patellas’ for carrying cotton, the ‘Pansway’ a passenger boat, the ‘Dingi’ for passenger transportation as well as fishing, the ‘Budgerow’ used by Europeans and rich natives to the ‘Mor Punkhee’, a native pleasure boat.  The list is exhaustive and informative. It is also highly evocative, resonating as it does with the innate poetry of the subject.

Meticulously researched, methodically organised and passionately recounted, History of Canals in Bengal is an eye-opener. A specialised inquiry, spanning multiple disciplines and graphically embellished, it is

mediated in a lucid prose which succeeds in advancing research in its sphere even as it spontaneously evokes the inherent romance of the subject. The vision enshrined in the work – that

one of the paths to rural and urban regeneration of eastern India, especially Bengal, lies in the retrieval and revival of the languishing waterways of the region – may well be a blueprint for the future.