"Of many Shades" | Morarji Desai: A Profile in Courage

In Morarji Desai, Arvindar Singh captures the quintessence of this great leader through various phases of his long, distinguished career with an in-depth analysis on the evolution of Desai’s professional life. Excerpt: It is now 24 years since Morarji Desai passed away, on 10 April 1995. The younger generation may not wholly remember him but it is doubtful if he has been or could have been wholly forgotten by any generation young or old. There are reasons both in the ideological and historical perspective of things. 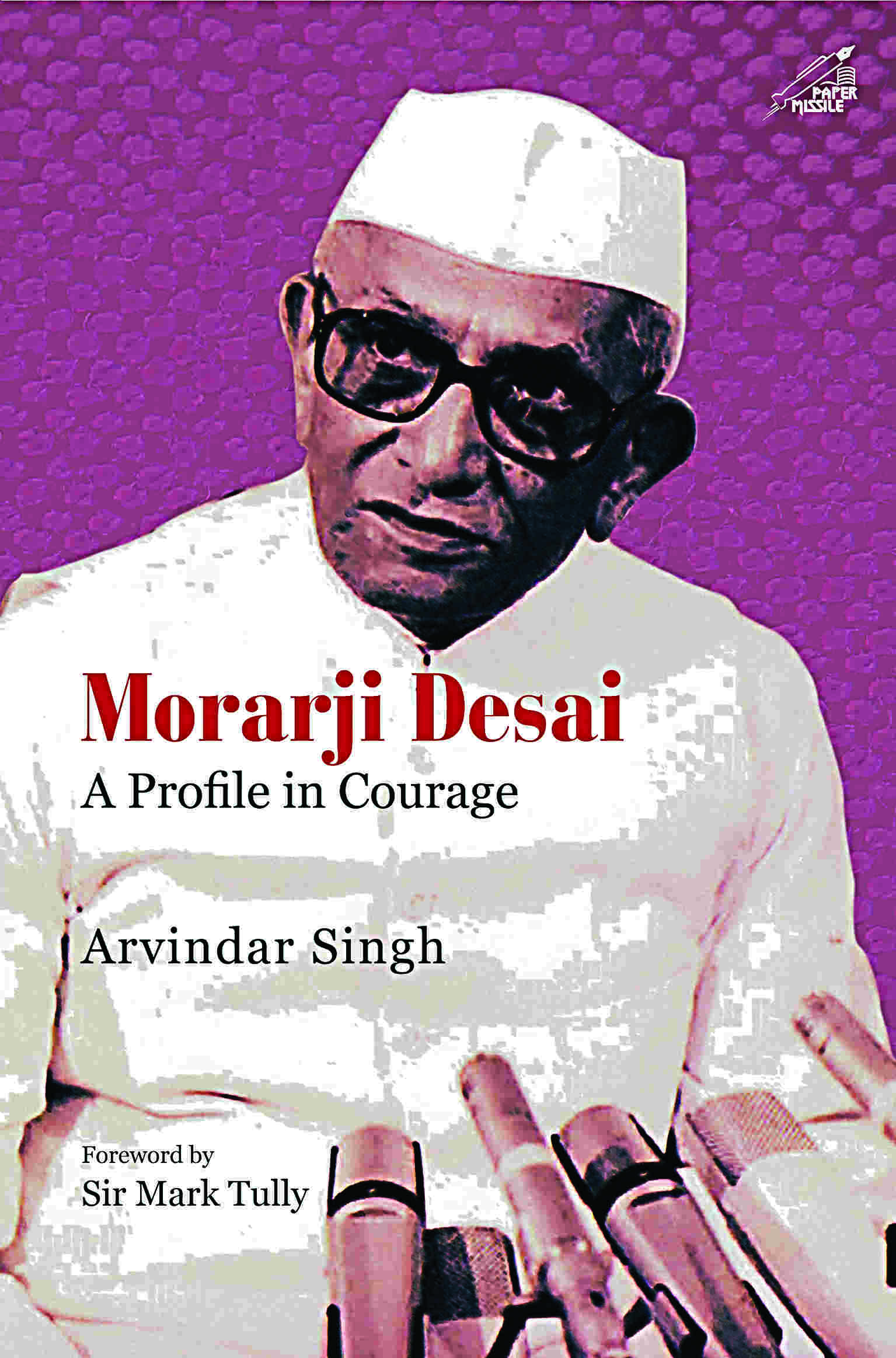 Firstly, the government he headed assumed office in circumstances which were unique in the history of the Indian republic, for it came in after ousting a dictatorial regime. The damage done to the Constitution by the 42nd Amendment (which Nani Palkhivala described as that ‘monstrous outrage’ on the Constitution) had to be undone, the bureaucracy had to be put on the rails after the total disregard for norms which had prevailed during the previous nineteen months of authoritarian rule bordering on anarchy.

Secondly, he is remembered as a man who did not mind calling a spade a spade and never considering himself in the popularity race. For example he voiced his views against the previous government’s takeover of Sikkim unequivocally in Parliament even though he received virtually no support from his own party during the course of the debate.

One of his lasting achievements was making another Declaration of Emergency virtually impossible by amending the Constitution by the 44th Amendment Act which had the unmistakable stamp of Morarji Desai’s thinking as a democrat and a man with a vision. This Amendment provided that henceforth an Emergency could be declared on Armed Rebellion alone and not on Internal Disturbance as was earlier provided. Another important feature of this Amendment was that it made the Fundamental Rights a feature of the Constitution which could not be suspended under an Emergency, which was previously allowed under the Constitution. The state of Internal Emergency could henceforth only be declared on the written advice of the Cabinet. (The 1975 emergency declaration had been signed on the midnight of 25 June 1975 by President Fakhruddin Ali Ahmed and the Cabinet was informed post facto). This 44th Amendment did not, however, remove the words ‘secular’ and ‘socialist’ which had been inserted into the Preamble by the 42nd Amendment. Though small this was a very significant part of 44th Amendment as it secured to future generations the secular and socialist nature of the republic. At least on paper no future regime can easily change these basic tenets of the Constitution. It goes to the credit of Morarji Desai and his Law Minister Shanti Bhushan that they were open minded enough not to disturb Amendments passed by the previous regime which were in the larger national interest. On being once asked as to what he felt was the single most important achievement of the Janata Government he said, ‘removing the sense of fear from the hearts of the people. They were terrified by what they saw was happening around them during the Emergency and they were too scared to come out openly. We changed all that. We brought the spirit of democracy back to the land.’ The well known journalist and writer Kuldip Nayar was of the view that the most lasting achievement of Morarji and the Janata Party government is that an Emergency through the back door as in 1975 was now virtually impossible. He is on record as having said, ‘This Constitutional coup can never be repeated.’

In the year 1984 the author had a fairly extensive conversation with Morarji Desai at his apartment in Marine Drive in Mumbai. The notes made at that time based on these interactions provided insights into the multi-faceted personality of Morarji and gave the author glimpses into the many facets of his character – his personality, principles, ideals and ideologies, his views on various issues like education, prohibition, public sector and private sector, his thoughts on his political colleagues, partners and opponents. In the following paragraphs, the author would like to share with the readers snippets from the conversations he had had with Morarji and information gleaned by the author from other sources as well to sum up this biography with an overview of Morarji Desai as a person, as an idealist, as an administrator and highlight how the idealist lived by his principles and ideologies and how he tried his very best to contributing to building an India of his dreams.

In Morarji’s life, the Bhagvad Gita had occupied a very prominent place. In the year 1934, he committed the whole Gita to memory and began to recite it once or twice daily and this deepened his faith in God and the Gita with every passing day. As the law of action and reaction exists in Physics, so says Morarji, exists the Law of Karma in Spiritual Science. The ambit of Spiritual Science is very much larger than the Physical one. The Universe, he feels, is under this everlasting law of God, which is all pervading and every being has to receive the result of karma, without exception. He was fully committed to his belief in the Law of Karma as enunciated in the Gita. Even when writhing in pain he did not make a sound as he believed it was connected to his past karma.

It is his great faith in God which gave Morarji complete peace of mind and made him such a calm and unruffled person. Morarji had said once that he ‘had no desire of any kind except the desire of trying to understand truth and to realise it and follow it.’ It is this which has been his main thrust throughout his life.

Morarji was a great believer in destiny, which again he felt was linked to the Law of Karma. He believed as the Gita says that one should neither be overjoyed by success, nor be despondent on failure. Both these should be treated with equanimity. Morarji felt that the future generations should not forget India’s glorious culture and heritage, which he believed was something unique.

A word about Morarji’s family may not be out of place here. After 1930 he had three surviving children: his daughter Virumati, second daughter Indu and his son Kantilal. Virumati, married to Ramanlal Desai, passed away in early 2000s. His second daughter Indu, who was a medical student, unfortunately committed suicide in 1953 after being jilted by the man she was due to marry. Kantilal, who has been mentioned earlier, had been in business and was later Morarji’s Private Secretary passed away in September 2014. His wife Padma who belonged to the Kirloskar family also sadly committed suicide in 1984. Morarji bore all these tragedies with equanimity.

Few people know that Morarji Desai the great disciplinarian was a smoker in his younger days (probably while in Government Service in the 1920s). He said once that he smoked in his younger days but then gave it up. (Interview with Pritish Nandy, The Illustrated Weekly of India, 2 February, 1986.)

It is often said that Morarji Desai was a rigid person who did not entertain any other point of view on certain issues and had a one-track mind. While the author is willing to concede that he held strong views on certain subjects like prohibition and pacifism which included India not developing Nuclear Weapons, to use the term rigid with regard to Morarji is being grossly unfair to the man. The late S. Nihal Singh, in conversation with the author, had stated that according to him Morarji was a fairly gentle soul whose outward exterior of being a person of strong beliefs often led him to be thought of as rigid and stubborn. Nihal Singh found him interested in various things of life as well.

(Excerpted with permission from Morarji Desai: A Profile In Courage by Arvindar Singh; published by Niyogi Books. The excerpt here is a part of the chapter titled ‘ The Many Shades and Hues of Morarji Desai’.)