"Lords of the Desert: Britain's Struggle with America to Dominate the Middle East" | Making of modern Middle East

This book delivers a most relevant perspective on how economic and strategic interests can override relations with even the closest allies, writes The Book Genie The Islamic State’s razing of a Syria-Iraq border post after they over-ran huge swathes of both countries in 2014 was seen as a repudiation of the colonial remaking of the Middle East after the First World War. But does the infamous Sykes-Picot pact, which drew the national borders as they exist now, suffice to explain the region’s tangled history? 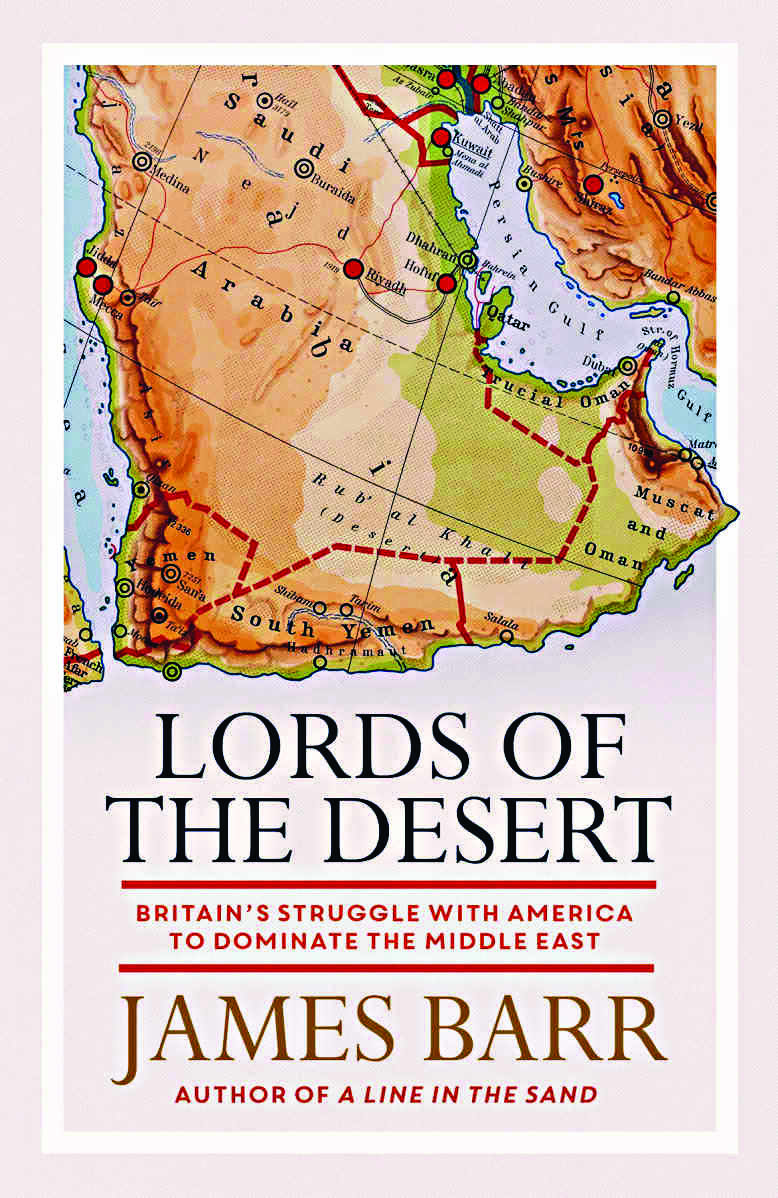 Or were there some other hidden dynamics, or conflict, that can help make sense of the welter of instability, inequality, and resentment that characterises the Middle East, from Egypt to Iran and from Syria to Yemen, throughout the 20th century and ahead into our times?

There certainly was, says British historian James Barr, and it was not the rivalry between the superpowers during the Cold War or the later proxy conflict between Saudi Arabia and Iran after the Shah’s overthrow in 1979 – but between two most unlikely and unexpected protagonists.

And, as the title of his latest book reveals, these two parties were the United Kingdom and the United States.

“All this is forgotten history. During the Cold War, Britain and the United States tried not to draw attention to their differences, and to this day, the British government retains over 100m of files about its ally that it would not declassify... This politics of secrecy and the Anglo-American coalitions in the Gulf in 1991 and again in Iraq again after 2003 have helped obscure a fact that was once common knowledge: from 1942, until Britain’s exit from the Gulf in 1971, Britain and the United States were invariably competitors in the Middle East, and often outright rivals...”

In this book, his third after Setting the Desert on Fire: T. E. Lawrence and Britain’s Secret War in Arabia, 1916-1918 (2006) and A Line in the Sand: Britain, France and the Struggle that Shaped the Middle East (2012), Barr shows that their shadow conflict did not begin after the Second World War, when colonialism began its long retreat, but well midway during the conflict – at a time when its outcome still hung in balance – and continued for over a tumultuous quarter of a century as Britain began its long disengagement from its last imperial outposts in the far periphery of the region and the US, slowly but steadily, began its rise to becoming a global superpower.

Drawing on newly declassified records and long-forgotten memoirs, including the diaries of a top British spymaster, he presents an intricate and engrossing epic, in which national prestige and pride, Arabic and Jewish nationalism, the imperatives of domestic elections, American presidential candidates and relatives of famous Presidents, maverick secret agents and special force soldiers and their escapades, Marlon Brando at the start of his career, but above all, big (oil) business play their parts.

As Barr notes, “oil and the vast profits it generated influence almost everything that happens after 1947 in this story: they were a constant source of tension between Washington and London.” And, though not mentioned here, this issue did not crop up in the 1940s, but even earlier, as among the foreign agents crisscrossing the then Ottoman-held Middle East, along with T E Lawrence was an American geologist, as Scott Anderson masterfully recounts in his Lawrence in Arabia (2014).

Barr’s chronological account starts in 1942 as Field Marshal Erwin Rommel was still leading his Afrika Korps towards the Suez Canal and President Franklin Roosevelt dispatched his 1940 election rival, Wendell C Willkie, as his special envoy on a round-the-world trip to assess the strategic situation. And “when the American politician set out from the East Coast at the end of August 1942 he was one of the most energetic American supporters of Britain. But by the time he reached the West Coast, forty-nine-days later, he had turned into one of its most outspoken critics.”

This, in a nutshell, was the genesis of the conflict that played out between the two sides, and their local proxies, in the desert wastes of Ibn Saud’s kingdom as he sought to expand into unmapped territory southward, in Palestine, where the Arab-Jew conflict, fanned by the compulsions such as the New York Mayor’s election – became an intractable problem that still continues into our present, in a changing Egypt, in factitious Syria and Iraq and in the stark terrain of Yemen and Oman.

However, the joint Anglo-American effort to oust nationalist Iranian Prime Minister Mohammad Mossadeq in 1953 – so often cited as an example of their collusion – was actually an exception, not the rule, Barr contends, for three years later came Suez, where Washington backed a nationalist Arab leader over its British, French and Israeli allies.

But, apart from bringing out some startling facts such as the first American attempts at regime changes in Syria and Iraq, and the start of the Saudi-American relationship, the benefit of this book is not only in approaching the recent history of the Middle East from an unexpected prism but in the abiding lessons it offers.

How economic and strategic interests can override relations with even the closest allies, the dangers of allowing domestic politics and values to bind foreign policies, of misreading and demonising diplomatic adversaries, of backing rebels, usually fundamentalist, for short-term gain at the expense of stability and order are instructive enough for a world wider than the Middle East with its “resource curse”, and do not remain confined to the annals of history. This is what makes this book a valuable read.

(The Book Genie is the writer’s chosen pen name)