Home > Book Review > In between lines

"Off the Shelf" | In between lines

Sridhar Balan’s magnum opus is a book lover’s testament to the greatness of books. Along the way, there are insights into publishing and anecdotes-a-plenty that make for compelling rereads; writes Arnav Jha Off the Shelf is a book about books. And that is great. A real proof of how far humanity has come as it were. We try to gain knowledge about knowledge itself. Now, this discussion could be more philosophical in nature, more verbose, a place where we discuss the quality of ’bookness’ that would define a book but this is not that book.

Off the Shelf is more of an experiential exploration of books, a work born of experiencing all sides of the experience, from publisher to reader and on to a critic. The author, Sridhar Balan has worked long decades in publishing and has stories to tell. Through these stories of conversations and letters exchanged, he draws up this homage to the written word.

The first thing that comes across is the author’s practised effort of making the text approachable and easy to read. This consideration for the reader goes beyond just the text. The book is broken down into several independent chapters. Independent in the sense that you can pick and choose particular chapters to read and still find a consistent reading experience that is self-contained. This also enhances its re-readability, a somewhat elusive factor that writers aspire for in their books. Off your dusty bookshelves as it were, making it something you return to for specific anecdotes or chapters.

The chapters themselves do follow a progression, starting with how the author came into publishing and how all of his experiences came together into writing this book. Then, the book follows up by a chapter that is centred on the importance of books, as a publisher, as an educator and as a lover of the written word. The writer calls books, “Memories on a shelf”. He speaks about the journey of books from bookshelves to dusty forgotten corners as they are hoarded and then rarely revisited, wasting away. As a person who has zealously hoarded and crammed away every book he has ever owned, I relate to how it is difficult but necessary sometimes to give books away, even if it feels like you are losing a tangible piece of your memories. 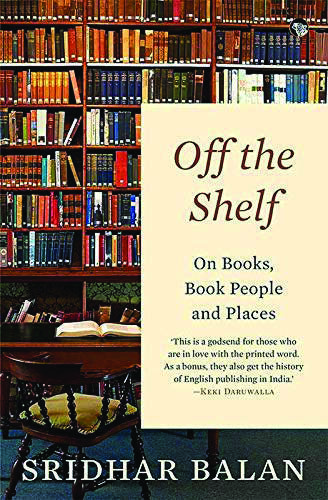 The book starts with the story behind Shakespeare and his First Folio. Fascinating details abound about how Shakespeare never kept copies of his plays, ever watchful of attempts to steal his work and how it made the job of later publishers nightmarishly difficult to compile his works. It is safe to say that the version of the texts of Shakespeare’s works we have today, may in many cases be somewhat different from the original script. But more than anything this chapter is meant to emphasise how without the publishers of the First Folio and those who helped make it possible, the works of Shakespeare may well have been in large part, lost to history.

There are other stories as well, some just about books and how people interact with them. He explores the lives of EV Rieu and Roy Hawkins, foundational figures for Oxford University Press in Bombay. At the same time, the author also explores the accounts of Dean Mahomed, the first Indian author in English and how his work has remained relatively unknown outside Indian literary circles. One of the more memorable chapters for me was the one that explores the backstory to Jim Corbett’s Man-Eaters of Kumaon. Roy Hawkins who undertook the task of publishing Corbett’s various accounts, ran into several issues. He needed a few live photos of the tigers, something that a hunter and a hunter of maneaters no less would not be in possession of and Jim Corbett is known to have quipped that if the tigers in the photos were alive, he would not be. Another issue was that Jim Corbett was less than enthusiastic about marketing his book or being even remotely involved in the process and so the publishers had to go through a variety of creative measures. In particular, was the masterstroke of using two tiger cubs from a nearby zoo as guests of honour on a radio show for book promotion ( in place of a reluctant Corbett) and then using their ink-stamped paw marks as autographs of sorts on the front page of every copy.

To conclude, this book is a delightful read to pursue at your own pace and convenience. It has a wide-ranging appeal, amendable to whatever level of involvement you have as a reader. Sometimes that’s all that it takes for a book to be worthwhile.350