"A Short History of Indian Railways" | From steam engines to metros

Aklekar’s memories and first hand experiences make for a rich narrative about how India went from Railways to Metros; writes Ayushman Ojha

Rajendra B. Aklekar’s first work of non-fiction was Halt Station India- The Dramatic Tale of the Nation’s First Rail Lines which was shortlisted at the Bangalore Literature Festival 2015 as best Non-Fiction(English). Next came India’s Railway Man - A Biography of Dr E Sreedharan. His latest novel takes the reader on a thrilling ride of over two centuries by weaving together anecdotes from 1830s to 2019.

Filled with many fun facts, this book is a people’s history of Indian Railways. An entirely non fictional piece of literature, it is a consolidation of Aklekar’s memories, newspaper reports, journal entries, official records and first-hand experiences creating a rich and engaging narrative.

He is meticulous while describing elements of history in sentences like, “I was fixated on the relics here, including the station’s signboard, which has the word ‘Royapuram’ painted over the once-etched ‘Rayapuram’, the station’s old name. The markings and the type of rails that form the support of a station’s roof and its pillars, base and brackets overhead usually give an important lead on the station’s and the line’s genesis”. The sentences appear to be very vivid, successful to create an image in readers minds.

The history of Indian Railways is presented in quite an interesting manner in simple language, divided into 15 chapters and with humorous anecdotes which subsumes all the tediousness that people fear while reading history. There is every important historical content sequenced in brief.

We learn that the story of Indian

Railways starts with the use of stationary steam engines in Bombay (1823) and in Calcutta (1828). Later in 1838 various experiments were performed by English engineers which finally gave India its first locomotive.

In 1840s, as England developed and so did many other countries, railway lines were proposed to be laid in India. The nation was at a crucial juncture, when its primary mode of transport was set to change for good. After overcoming every difficulty and barrier, Indian railways started to excel and the first passanger train ran in Bombay in 1854, creating history. 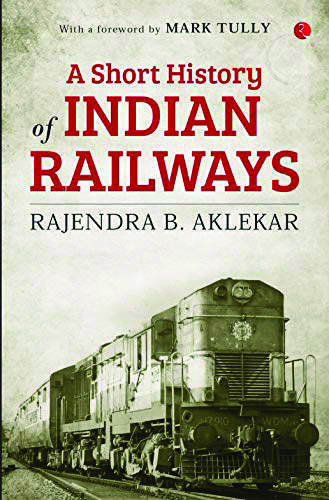 Apart from the factual excerpts about the technicalities, there are numerous paradigms about Indian myths and superstitions related to Indian Railways. The sight of locomotives and its run had apparently led to hysteria amongst the common population.

Aklekar says, “No one was sure what it was- a devil, a machine, a magical animal or some wizard that would capture their land. People hid from it, saw glimpses of it and floated stories about it”. All perspectives are potrayed beautifully in that crime, world war, romance, literature and India’s freedom movement - all had Railways as an integral part.

Aklekar tries to tell the stories the way they have been, adding value and enhancing his work. Keeping Railways in mind, he has added stories of Gandhi, Kakori Train Dacoity, and the Azad Hind Fauz which depicts the India’s freedom struggle. He has penned down all great leaders and events in the past starting from Railway Ministers, officials to advancements in Indian Railways in 21st century. It also has components such as sarcastic colloquial speech of Lalu Prasad Yadav, adding different flavours to the book.

What’s fascinating is that even a lay reader can understand all the technical jargon as Aklekar says, “The beauty is in it’s simplicity”. It is truly a great piece of

work on the history of railways. If one has interest and curiousity about Indian railways, this book will be a delightful read.