"Tools and Weapons: The Promise & Pearls of the Digital Age" | Data: Your new boss

Touted to be as essential to living as air, data is defining, contouring and usurping power relations in the 21st century; writes Nishant Arora At a time when there are calls to break tech giants like Facebook and Google, Microsoft President Brad Smith has a solution: To ensure that data does not become the province of a few large companies and countries, the stakeholders should aim to make the effective use of data as accessible as electricity.

Refusing to believe that data is the new oil, Smith feels that when it comes to modern civilisation, data is more like the air we breathe than the oil we burn.

“Some say that data has become the oil of the 21st century. But this understates the reality. A century ago, automobiles, airplanes, and many trains ran on oil. Today, every aspect of human life is fueled by data,” Smith writes in his techno-legal thriller, titled Tools and Weapons: The Promise & Pearls of the Digital Age.

“Unlike oil, data has become a renewable resource that we humans can create ourselves. This decade will end with almost 25 times as much digital data as when it began with Artificial Intelligence (AI). We are doing more with data than ever before”.

Smith has co-authored the book with Carol Ann Browne, senior director of communications and external relations at Microsoft, which makes a strong pitch to regulate the tech titans and calls for them to take greater responsibility for their actions, as we witness more data breaches in companies like Facebook and anti-competition practices in giants like Google. 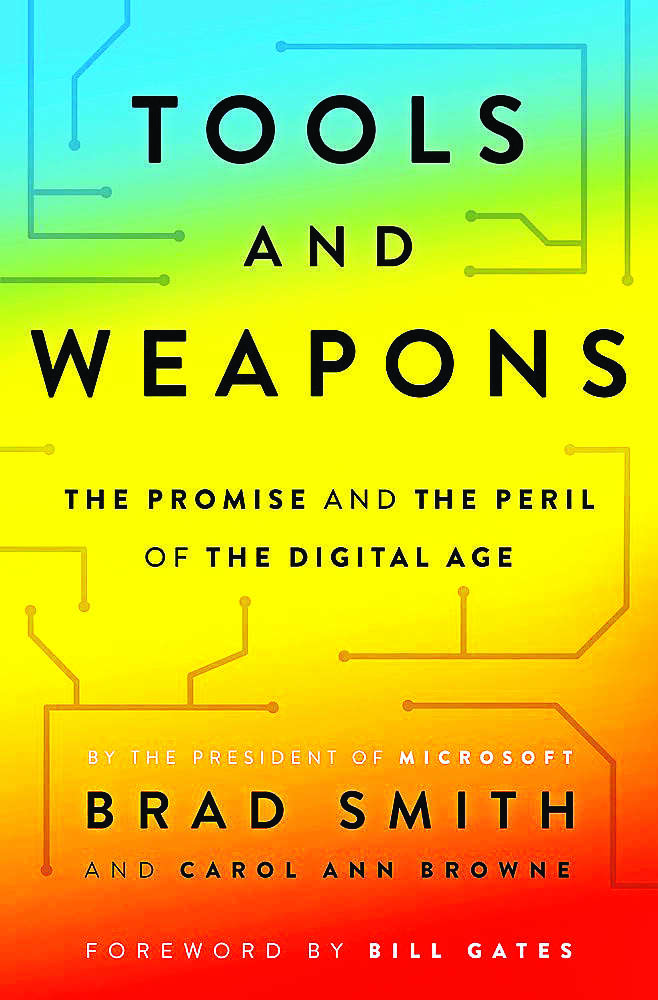 Smith knows it is not an easy task and the same technology that is a powerful tool for some becomes a formidable weapon for others.

“But with the right approach to sharing data and the right support from governments, it is more than possible for the world to create a model for a new generation of economic growth,” writes Smith.

While sweeping digital transformation holds great promise, the answer perhaps lies in democratising data, to make it open like the open-source software.

“Organisations need to decide whether and how to share data. And if so, on what terms, a few principles will be foundational. The first is concrete arrangements to protect privacy,” says Smith.

Given the evolution of privacy concerns, this is a pre-requisite both for enabling organisations to share data about people and for people to become comfortable sharing data about themselves.

“A second critical lead will involve security. We need to enable group to share data without giving up their ownership and ongoing control of the data they share. In addressing all these issues, the open data movement can take a page from open source trends for software,” hopes the Microsoft President.

Technology today is having an immensely uneven economic impact, creating huge advances and wealth for some while leaving others behind as it displaces jobs and fails to reach communities that lack broadband connectivity.

It is also increasing the polarisation of domestic communities, eroding privacy and creating an emerging capability for authoritarian regimes to exercise unprecedented surveillance of their citizens. As AI continues to advance, all these developments will accelerate even more.

“These issues are bigger than any single person, company, industry, or even technology itself. They involve fundamental values of democratic freedoms and human rights.

“The world needs a mixture of self-regulation and government action. Governments need to move faster and start to catch up with the pace of technology,” says Smith who is favourite among people (including former Facebook security chief Alex Stamos) to replace Mark Zuckerberg and fix the place once and for all.

According to Bill Gates who has written the foreword, the ability to collect huge amount of data is a double-edged sword.

“One the one hand, it empowers governments, businesses, and individuals to make better decisions. On the other hand, it raises big questions about how we can use that data while protecting people’s right to privacy.”

The book covers a range of issues, including cyber security, privacy, the diversity of the IT workforce and the relationship between the US and China.

According to Reed Hastings, CEO of Netflix, the ideas in the book won’t solve all of our problems but they are a very good place to start.

“And it is not that the government will move too fast. It is that they will be too slow. Technology innovation is not going to slow down. The work to manage it needs to speed up.”