"The Geography of Thought" | Contoured by culture There are certain works that at first glance promise to bring a bombastically controversial and firebrand public opinion but on closer inspection lack the required gravitas to actually hold such an inflammatory reputation. The Geography of Thought is one such work, falling well short of the controversy one may think it will invoke with a subtitle like, ‘How Asians and Westerners Think Differently’.

All the same, when it was published in 2003, the book divided its readers on the nature of its arguments – some called it an influential work while others dismissed it as problematic not only in its assertions but also in its less then thorough methods to reach said assertions. But this is all about the reactions of the academic world which largely remain the primary audience for this work. This is not to say the book is hard to approach as it has been written in controversy to make at least the reading of it, if not the contents, layman friendly.

The book tries to sell itself on the universal applicability of its ideas and central theme. The central idea in question is one that explores how people born in Asian cultures think fundamentally differently from people born in Western cultures. The author explores this difference from its very roots, starting with how different cultures and social systems were born reflective of their geography, and ends by exploring how they continue to inform the basic differences in thought process even in the modern age of globalisation. Nisbett also uses the introduction to address the most basic and problematic aspect of the book, which is the labelling of large groups of disparate people as ‘Asian’ and ‘Western’. Nisbett uses the term ‘Western’ to denote solely people of European origin but the term ‘Asian’ is far more problematic as he uses it to denote East Asia as a whole with China at its ideological centre blending the vast differences in culture between several distinct nationalities. You may be tempted to give Nisbett the benefit of doubt on this generalisation, given his early disclosure, but sadly its wasted trust. It is difficult to perceive any real reason behind why he made the generalisation beyond the fact that it was convenient for his assertions and that it fit conveniently with the subject groups he used as the basis of his study, something which at best can be seen as lazy and at worst outright callous. The lack of diversity in the subject group of his study is indeed one of the biggest criticisms that have been labelled against Nisbett. 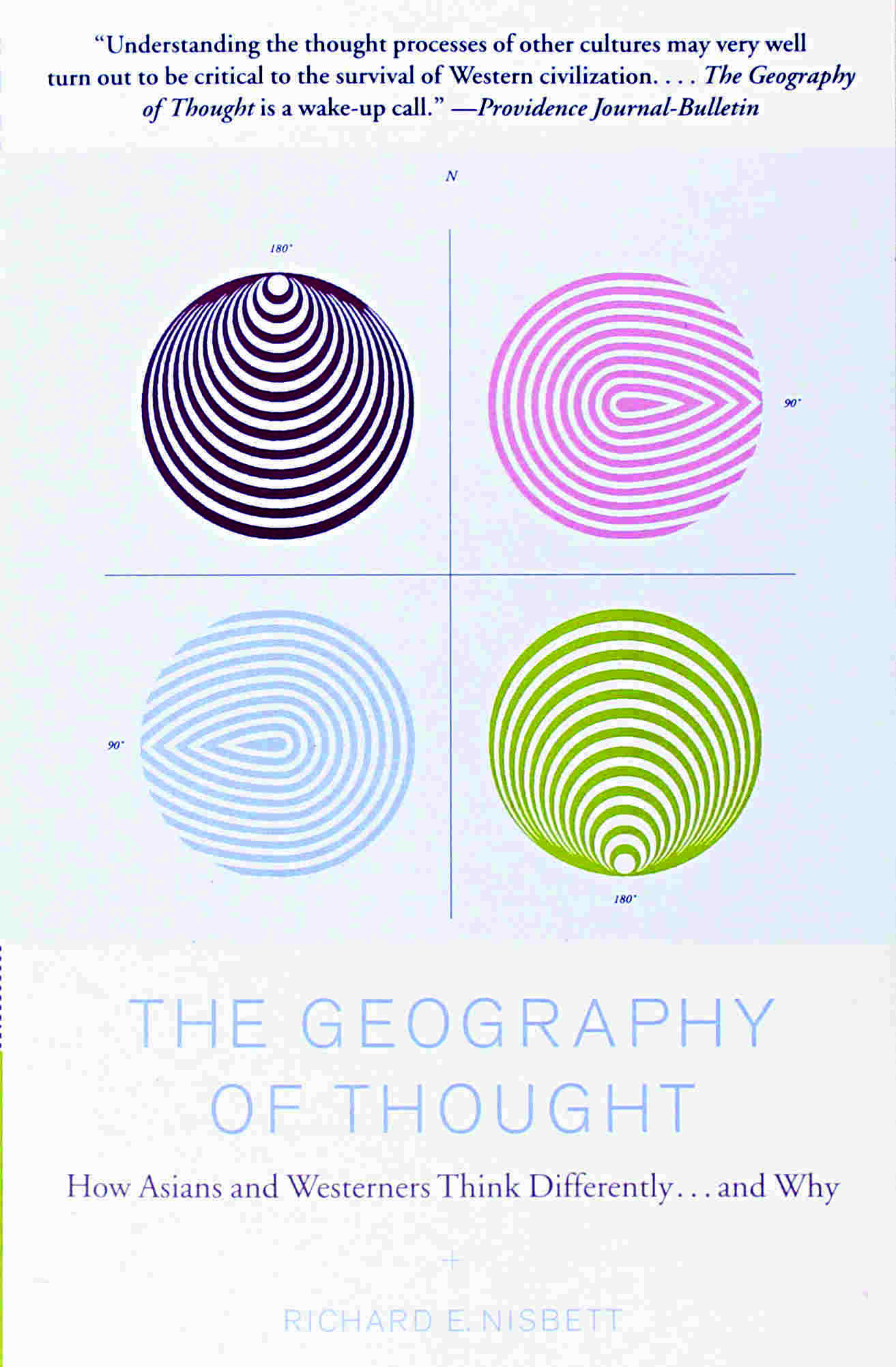 The experiments are interesting to say the least and without spoiling much are probably closest to what one may consider the ‘fun bits’ in an otherwise academic work. All of them try to demonstrate the difference in worldly perception between the West and Asia. This has boiled down to differences in basic philosophy. Western thought is largely tied to Greek philosophy whereas Asian thought is tied to Confucian philosophy. The experiments broadly work to assert this difference between philosophies as one of Asians viewing the world through a wide lens as compared to Westerners who conform to a tunnel vision kind of thought process. This difference is applied to everything from economy to governance and even scientific progress.

All in all, the experiments and their innovative nature and observations may lead a casual reader to fall into the logic of the book and find a decisive difference in the ways of thinking of East and West but the methodology used makes it difficult to admit to the conclusions presented. First, there is the subject group itself which is a group of college students. College students are many things but most people can agree that they aren’t an ideal representation of large swathes of the population. They quite simply don’t make the best group to draw such wide reaching conclusions from. Then there is the way the studies are presented with a concentrated effort in erasing any other distinctions i.e., religion, gender, etc., all in the name of having all participants conform to the East and West dichotomy. Nisbett frequently acknowledges the fact that he is ignoring other categories and distinctions but sees them as minor issues that are excusable in trying to create cross cultural understanding born of scientific enterprise. His insistence on such narrow categories of East and West does seem to defeat this stated purpose with the results being questionable in how scientific they turn out to be and being conducive to cultural stereotypes rather than any meaningful understanding.

To conclude, The Geography of Thought is at best a work meant to foster a larger debate but cannot itself participate in this debate as it is mostly a speculative work based on less than solid academic leg work. To the average reader this book maybe an occasional conversation piece or something to ponder about in parts and certainly not a life changing read as some have described it.