"Fluid: The Approach Applied by Geniuses Over Centuries" | Transience of the Human Mind

Shattering the myth of the human mind’s singular orientation, the author reminds us of the multifarious ways in which our brain can conceptualise, act and orient, discusses Daman Singh Indeed, the role education plays in one’s life is momentous as far as the development of an individual is concerned. It is one of the basic needs for a human being, encompassing all the other necessary requirements to survive in today’s harsh world, including skill-set(s), knowledge, beliefs, morals, values, ethics and much more. Last but not the least – it is as crucial in shaping one’s perspective towards life as earning and sustaining his/her livelihood, if nothing else. 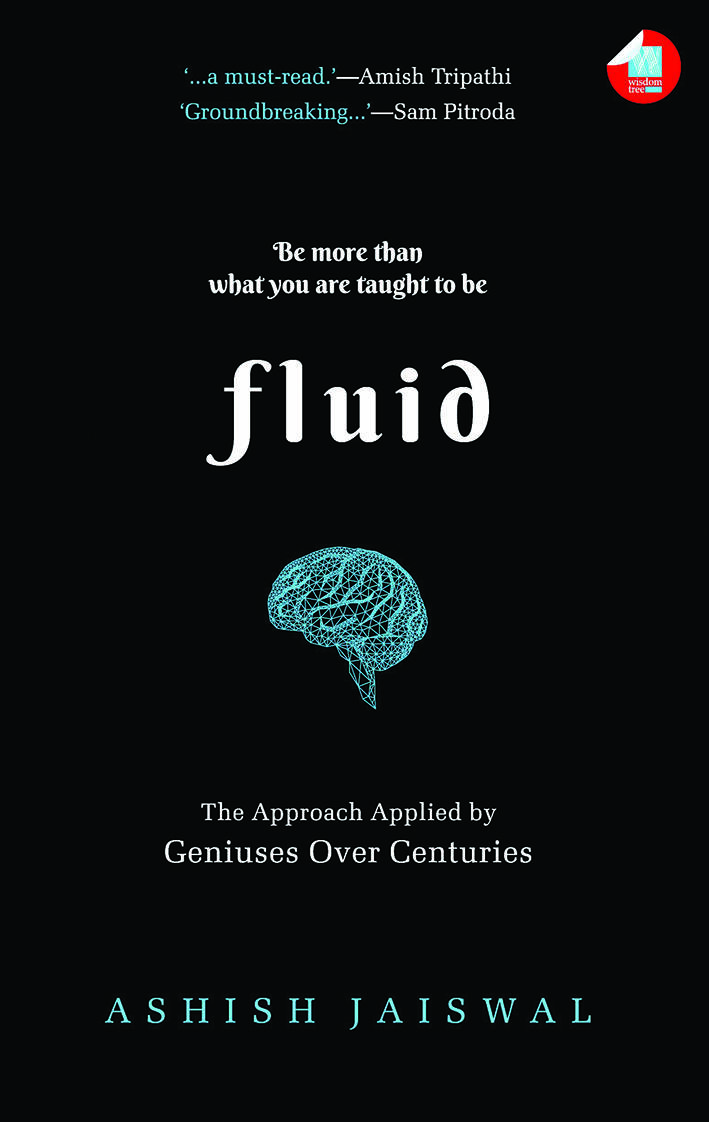 But the kind of education we are familiar with has become outdated, it is rotting and down the centuries has morphed into being ‘discipline-centric’. It has caged individuals in their respective disciplines and compelled us to tread along the mainstream paths of arts, science or commerce – according to Ashish Jaiswal, who has penned this thought-provoking piece titled Fluid. He brings to life the concept of interdisciplinary learning and the innate experimenting, as applied by geniuses during their lifetime to bring about significant changes that have influenced generations, drastically altering the fate of mankind. Interestingly, he has also painstakingly emphasised the urgent need of evolving our nature to become fluid as those celebrated geniuses he mentions in order to tackle the forthcoming ‘Dangers of Machine Age’ especially AI (Artificial Intelligence) which he discusses later in his book.

Resounding with a fascinating narrative combined with extensive research, the book is intertwined with some pictures, sketches and it starts with three different stories depicting the ‘Anti-fluid’ perspective wherein the reluctance of protagonists to go beyond the confinements of their respective mainstream subjects, hardened already by their subjective viewpoint of everything around them essentially fuelled by so-called holistic education of the modern world, has diminished their ability to expand their horizon and see beyond the

The left-right brain theory has also floated various misconceptions around the world as many famous writers, poets, painters, musicians of the world are said to be right-brained and the author has cleared the air on this topic in a fair and square manner. Since the brain is basically classified into two parts; the left side which deals with logic, analyses, rationality and the right which is more creative and instinctual. The popularly accepted notion regarding this theory is that a musician cannot be good at Mathematics or science subjects or vice-versa because only one side of the brain predominates an individual during her/his lifetime and that is how it’s supposed to be i.e. a person is either right or left-brained. Take for example the character of Rishi – delineated as an artist in the first story who staunchly thinks of himself as a right-brained person. He shuts the door on all the benedictions that could’ve descended on him had he not rooted his belief entirely in ‘the spinning dancer test’ which aligned him and many others to believe in the one-sided efficiency of the brain. When he saw the girl swirling in a clockwise motion in an online video, he cemented his belief that he was a right-brained person which only created walls around him.

Shattering this popular belief, the novel dishes out examples of eminent geniuses such as Leonardo da Vinci, Charles Darwin, C V Raman, Wolfgang Goethe to bring to light the marvel that these geniuses have produced all along the way, daring to remain fluid although they failed many a time, duly altering their course of life, exploring but never allowing themselves to be walled by disciplines with some even straying away from education for the sake of real learning, travelling and backpacking around the world and eventually building one of the most expensive enterprises in the world – Apple – and who else would it be other than the co-founder Steve Jobs. The story of Apple and Steve Jobs in the novel is an enthralling one, a must-read.

The author, plumbing the extent of technological advancements in his research, has revealed much about what automation and 3D printing in the world have achieved in multifarious fields of work and it is sure to sweep one off their feet as the reader discovers that the first car designed exclusively by the robots is already out.

Moreover, these advanced technologies can even create a building on their own saving time, workforce, finances and what-have-you. But the thing here to see is the underlying danger behind all the awe-inspiring acts carried out by these machines, they are also slowly creeping into the creative field such as writing, composing music etc. which were earlier thought to be beyond the reach of those glittering robotic hands. The impact it could have on the human race, as the researchers continue to roll out bots in a bid to make the world a better place to live, can also backfire as these robots have already replaced dozens of employees working in various fields.

In deference to this view, as our current fragile, out-of-date frame of education stands, which is based on boxing individuals in its wide array of disciplines rather than making them ‘fluid’, the author reiterates the role of the interdisciplinary approach in wholly imparting education.

The actual meaning of the word education is to draw out but in the contemporary world, it has been all about forcing in, especially at the outset of the machine age. This can prove to be a hellacious menace as robots start replacing humans in various fields of work as perceived by the author.