The author, relying on prose, elaborates upon the bitter choices that women make – mostly unsavoury and often redefining. Anita Nair’s Eating Wasps has the ability to unsettle you, in just the same way that eating a wasp for real would jolt you. The bite of the toxins emanating from the insect’s glands trapped in the maw, the crunch of cuticle as it crumbles under your teeth – before you choose to either spit out the bitter mash or your involuntary muscles swallow the trapped, crushed bug altogether. 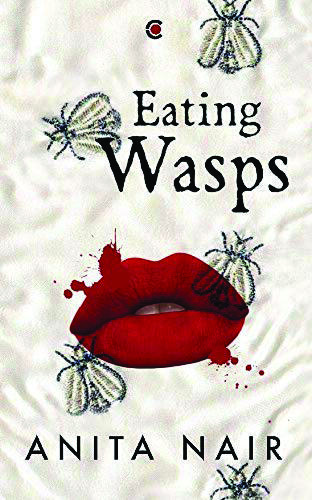 Eating Wasps is all about the bitter choices which confront women across walks of life and a moving chronicle of their efforts at making that crucial decision which redefines their lives in these tough conditions.

The novel begins with the suicide of a writer and the subsequent unleashing of a plot, which re-opens more than half a century later. There is a brief, semi-erotic prologue set in the 1960s, in which Sreelakshmi, an author who is reckoned as Kerala’s Virginia Woolf, kills herself.

You may feel a chill rising up your spine when you read about her lover Markose, a writer himself, who pokes at the embers of her pyre with a stick and picks out the bone of her forefinger as a memento, which he then wraps in a velvet pen-case and stashes in the false back of a cupboard.

Decades later, the accidental discovery of the charred and cached secret by a child begins the unravelling of stories of the novel’s protagonists and how they tackle tough choices which life throws at them – in much the same way as one has to take a call about whether to swallow the wasp or spit it out.

The narratives of the women are central to the plot of the novel, whether it is the torturous existence of the writer Sreelakshmi or that of Urvashi, who is tottering in her seemingly perfect relationship with her husband, or Najma, a teacher who goes on negotiating with her life, even after a spurned stalker scars her with acid.

Set in Kerala, the stories of Nair’s heroines span multiple castes, classes and religions as if to underscore the point that women of all hues and from all backgrounds are confronted with problems which are more or less universal.

As the book’s narrator argues: “No one chooses to eat a wasp. But what if it were to fly into your mouth? Would you let it sting your tongue or bite down on it? Would you spit or swallow? Would you crumple or fight? The lives of women everywhere is about such decisions and the consequences thereof.”

technology and its mediums – Tinder, Instagram, etc – and the role they play in our lives today. On the whole, it is yet another rich literary discourse on Indian feminism by Nair.