"The Untold Vajpayee: Politician and Paradox" | VAJPAYEE: THE POET POLITICIAN

Far from a eulogy, Ullekh’s book is an introspective lens into the veiled world of the soft-spoken Vajpayee, writes Uma Nair Politics and chessboard conversations come few and far between for an art critic like me. But the recent passing away of former Prime Minister Atal Bihari Vajpayee and the numerous eulogies in newspapers made me pick up the pedantic commentator Ullekh NP’s magnum opus on the ‘poet and politician’ Vajpayee. 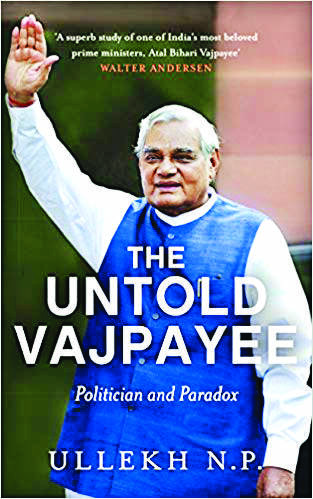 Ullekh shared vignettes with me before I dipped into the pages of his Penguin publication which has been translated into Marathi and Hindi recently, published by Manjul Publishers.

“Atal was keen, very early on, to frequent RSS shakhas,” states Ullekh. “He followed their hardline Hindutva politics opposing Gandhi’s secular ones, and he built his identity around his organization’s ideology.”

The image one most identifies with the former Prime Minister is that of a liberal, a leader who reached out again and again to Pakistan even after an unfairly fought and hard-won Kargil war. “He was a leader who worked to solve the Kashmir crisis, who spoke of ‘insaniyat’ above all else. It is this paradox that made Vajpayee interesting fodder for a biography,” reminisces Ullekh.

Gandhi, Marx and Gita is the chapter that proved to be riveting. While Love and Politics gives us an insight into a beautiful relationship that cuts across superficial societal divisions.

Divided into chronological chapters it is the middle years that revel. The years 1977-1984 prove to be years that define his individuality, his admiration for Pt Nehru and the hiccups that followed. Vajpayee’s masterful oratory, his relationship with SP Mookerjee who hired him as his assistant, translator, stenographer, all rolled into one, prove to be engaging in the building up of close links.

“I think he was a natural successor to his mentors like Mookerjee – and as someone who, unlike his mentors, was ready to mould the Bhartiya Jana Sangh to connect it with those who disapproved of its rigid, purist ways,” says Ullekh. “Vajpayee also braved odds and fought off rivals who wanted to align with reform-oriented outfits, a proposition that would have been incongruent with the India of the time. Later, however, he reshaped the contours of his party, the successor to the Bharatiya Jana Sangh, the Bharatiya Janata Party, formed in 1980, to suit new challenges and strike new opportunities,” adds Ullekh.

Ullekh unravels Vajpayee’s Chanakya Niti and tells us how the great schemer played his cards close to his chest. But we see an ambivalent individual who never opposed the move to turn the Ram Temple agitation into a massive movement with an eye to pull in Hindu votes beyond caste and class.

“To the outside world, he was opposed to the Ayodhya movement spearheaded by Advani, but that didn’t mean he took a firm stand within the party. He often poked fun at “Advaniji and his vanarsena” that marched from Somnath Temple demanding the construction of a Ram Temple in Ayodhya, in a place where the Babri Masjid then stood.”

There are nuggets here that stand out for their mapping of the BJP’s genesis. Intriguing instances stand out, when Vajpayee gets worried that there is a coup of sorts by rivals within the BJP to replace him as PM, a few months after Advani took over as deputy PM, becomes a milestone in events.

Vajpayee’s reluctance to get a complete check up done makes us wonder about his stroke. “Vajpayee may not have had a stroke in 2009 if he had not refused years earlier to do a CT scan – he said he didn't want to go "inside a machine”, maintains Ullekh.

Vajpayee’s honesty and integrity in his dealings is writ large in the many pages. His diplomatic advances, even during India’s emergency, show him as a pragmatist. Vajpayee's 'compromise' proposal during Emergency becomes an important moment in the politics of reasoning. He asked ABVP to 'own up' for the destruction of public property so that the opposition could have a deal with the government.

The later years in the new millennium become vital in the happenings of the BJP. Vajpayee’s reaction to the 2002 riots is a reflection of his sensitivity and the fabric of honesty that dwells in him. Obviously, he was deeply piqued and uncomfortable about the 2002 riots.

Ullekh reminisces: “Mani Sankar Aiyar says in an interview with me for this book that Vajpayee's daughter, Namita Bhattacharya, praised a column in which the Congress leader attacked Modi and praised Vajpayee.

"After the publication of the piece, Aiyar was heartened when Vajpayee’s daughter Namita told him that she was immensely touched by what he wrote on Baapji and that she had read it aloud to her father, hoping that he understood what was written about him and the priorities of his successors."

The book is far from a eulogy, it is about the facts and realities that formed the life of one of BJP’s greatest players, who formed the edifice of the BJP against a Congress that ruled for years without questions. The uncomfortable details about LK Advani and group’s Ayodhya dispute resolution plan with the help of Ayatollahs from Iran is an eye-opener of many margins and manifestations. This book is one that must belong to your shelf because you can open and begin anywhere between the pages to refresh your memory of one man who defined India’s political settings in myriad ways.