Classical Indian dance has its roots etched in an oral tradition of transmission – often wresting the possibility of affirming heritage, argues R Sedhuraman In the 1930s, when the freedom struggle was gathering momentum, the British Raj slapped a ban on India's actor-dancers, taking away their freedom of speech. They were not allowed to sing on the stage. To overcome this problem, renowned artists and institutions redefined classical dance forms such as Kathakali, Kuchipudi, Bharatanatyam and Odissi. A number of actor-dancers and classical art schools introduced musicians on the dance stage to fulfil the role of playback singers. The singer's voice then became the voice of the actor-dancer. 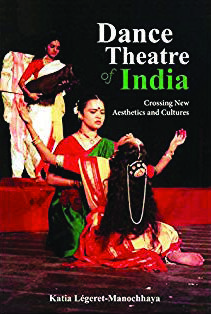 This and many more interesting twists and turns in the evolution and development of traditional and contemporary Indian dance forms have been narrated in great detail in a new book titled, Dance Theatre of India: Crossing New Aesthetics and Cultures.

The book has been authored by Katia Legeret-Manochhaya, Professor of Performing Arts and Aesthetics in the Department of Theatre at University of Paris 8, and director of the research laboratory EA 1573, part of the doctoral school of EDESTA: Aesthetics, Sciences and Technologies of the Arts. Trained in Bharatanatyam (dance/theatre of South India) in 1979, she has created an international career for herself in this dance form. As a choreographer and director, Manochhaya has composed and staged several performances since 1998, mostly in Paris.

In the book, the author explores the various rasas of Bharatanatyam and other dance forms, both as a dancer and a researcher. The book transports the reader to a world of dance and drama, where one can enjoy the various expressions of the artists in colourful costumes while narrating stories from all over the world.

She says, she finds it difficult to classify Indian theatre and dance according to Western professional artistic categories. This is because actors in India are also dancers, musicians and storytellers. Bharatanatyam is a form of dance theatre like Kathakali or Odissi. In any case, reducing it to dance alone would be disrespectful to the immense acting work required to act out the stories of major literary texts such as the Mahabharata or the Ramayana, she points out.

The book carries a number of photographic portraits of various live dance performances to explain the author's perspective to the readers. The author also raises several questions in the book, discusses the relevant issues and comes up with her explanations. At the outset, she clarifies that she is interested in the new relations between dance and theatre. According to the most ancient principles from the Natya Shastra, a founding text in India for the dramatic arts, dance and theatre go hand in hand.

But are their coexistence and mutual inspiration still relevant now in India and internationally? How do today's dancers use their rhythmic movements to deconstruct or transform cultural codes and inherent gestures from actors' traditional vocabulary? Also, conversely, how does the intracultural approach of a rural experimental theatre that was specifically adopted in Rustom Bharucha's research enable European influences or the idea of a universal comprehension of cultural codes to be resisted?

Similarly, why does dance seek to get away from the theatre as a place of production of a pre-established religious, social, political or economic meaning?

To better understand these processes, she says we could look at the gestural practices of actor-dancers who have been trained in "classical" styles. For example, in the Kathak form, we look at how Akram Khan and the Master Birju Maharaj transform certain gestures to enhance communication with an audience from other countries. Conversely, street theatres in Bengaluru, which are linked to NGOs, appropriate and reuse culturally codified gestural languages to portray current affairs issues and social problems.

In classical arts such as Bharatanatyam, such borders are porous because creators have to simultaneously be choreographers, musical conductors and directors. An artist working in this field has three professions from the standpoint of Western categorisation of the arts. To help us understand how this idea of total art works, the aesthetic theories from the Natya Shastra, from its commentator Abhinavagupta along with those from the Abhinayadarpana and the Sangitaratnakara are precious but are also always linked to very precise staging techniques, the author says.

For example, the notions of rasa, creativity and improvisation will be analysed based on stagings of the Ramayana in the Mysore Bharatanatyam style. Pointing out that Bharatanatyam is founded on exclusively oral transmission, she raises a doubt that it has been preserved as part of India's cultural heritage.

"This art is founded on exclusively oral transmission. So how is it possible for it to be preserved as part of our cultural heritage," she asks. IANS