"Memories are Made of This" | Humour in the Uniform

Rajendra Shekhar has scripted his life as an encounter with others — an effervescent journey of varied faces through distinct places, writes Radhika Dutt. Rajendra Shekhar, former Director, CBI and DG of Rajasthan Police has woven episodes of his life, from his childhood in Bharatpur to his schooling in Mayo, his subsequent college in Delhi and to finally, his professional journey in Rajasthan and beyond.

Shekhar is among the most celebrated IPS officers from the 1957 batch, having served in the most reputed Rajasthan cadre – a most sought after outfit among Indian police forces. He has previously scripted two books in English and one in Hindi – all have received their due acclaim. 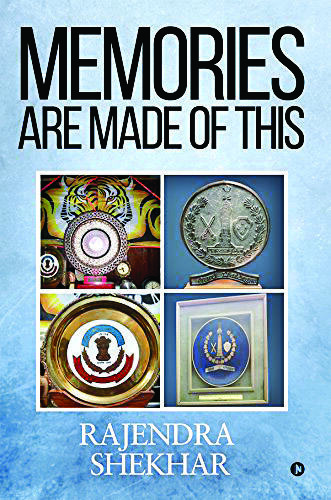 This book is the result of Shekhar’s onerous engagement with social media, where he has strung together his memoirs of growing up in a world that was probably marked by more simplicity, even in conflicts. Facebook has been his chosen medium of expression. He has scavenged through his memory picking his choicest excerpts and consequently, he has 'posted' short snippets of events that have characterised him and also his time. This book then is a collection of his Facebook posts as also a journey through the life, living and becoming of Rajendra Shekhar – a most notable bureaucrat of the Indian democracy.

Shekhar’s unique specialty is his character delineation almost in tandem with Somerset Maugham’s stylisation of protagonists. He pays intense attention to the details of characters that make the events and, in the process, with the assistance of those characters he is able to make succinct observations about life and human philosophy at large. His stories are never theoretical though their argument maybe deeply entrenched in the theory of human action.

As he tells readers about his plight with his tutor in Bharatpur and his unrelenting father who refused to submit to his demands – his narration from the 20th century resonated strongly with the sentiments of an erstwhile 21st century child. We have all had the fortune of witnessing a Mr Mansukha in our lives who, quite comfortably, reduced living to hell and, with some evil machination, gained a soft-corner in our otherwise sensible parent's hearts. The tussle is real.

Despite being an octogenarian, Shekhar’s writing does not seem to be anachronistic, even when he speaks of his childhood and the many encounters with people in his immediate periphery. By a delightful chance, the author was sent away to Mayo on an offering by the Maharaja of Bharatpur, however, this took a nasty turn as a misconception angered the Maharaja who relieved the author’s father of all responsibilities, including the sponsorship to Mayo. Soon, after another turn of events though, the author continued with Mayo – much to his and his Amma’s delight!

Shekhar’s vivid descriptions transport the reader into his very world, lending a new lens of experience.The careful details and the intricate characterisations paint a canvas in motion. The lucidity with which he expresses his thought and the fluidity of the shifting chapters is indeed commendable. The dedication that complements an administrative officer is evident even as he scripts the nitty-gritty of his enviable life.

Arguably the most poignant character sketch in the book would be of Masoom Ali. Once the author’s senior at Mayo, Ajmer, Masoom was a most gifted sportsperson who had lost his crown in tennis to Shekhar. Though the author and the audience insist that Masoom let him win – Masoon denied the gifted allegation. Over time, naturally, they developed a friendship that relived itself beyond the four walls of Mayo institution. The “uncrowned Nawab of Tonk”, Masoom had his way through things. Visiting the author on a bicycle, Shekhar recalls, “His laughter, as it filtered through the purifying sieve of his upper dentures, bore his age-old stamp of sincerity and ingenuousness…Only Masoom could make humility look great.” Dying prematurely at 65, Masoom has left an indelible mark on the author’s being. Friendships then are the life-long anodyne that move even the most credible.

With descriptions of his time in the forces, Shekhar lends an insight into the human faces that make and break authority. Usually known for their aggression and unapproachability, Shekhar presents a more light-hearted tinge to the forces. From his participation at the Indo-Pak border to his operations in Rajasthan, the highlights of his stories are not the actions or the brutal events – they are the people, their humour, their silly judgements – which, in fact, form the true basis of existence.

The Tunnel to God, for instance is a hilarious account of a sadhu who was duping villagers with his preposterous claims of godliness. While indicating the surge of unscrupulous activities that are conducted in rural India behind the glamour of urban structures – Shekhar lends a hilarious touch to a small-scale Godman’s means of appropriating God.

The two highlights of Shekhar’s life, as he himself has declared, first, include an encounter with Prime Minister Jawahar Lal Nehru. Shekhar’s descriptions, again, transport you to the anteroom where the IPS officers were seated awaiting their Bharat Darshan. Shekhar’s greatest takeaway was Nehru’s emphasis that a public servant’s “paramount duty is to do maximum good for the maximum number of people.” Yet, as Shekhar discovered during the course of his service, and a challenge that we Indians battle even today “only a few chosen were more equal than others”.

The second, more heartwarming encounter, was with Sheila, his wife now, who was also his batchmate during his days at St Stephen's. A member of the ‘water squad’ as titled by the author’s accomplice ‘Lion’, Sheila compelled the author to attend more classes and perhaps, even paved the way for him to crack the coveted IPS examinations.

Memories are Made of This, has been aptly titled. The author expresses with passion and care the many events that shaped his worldview and lent him a lens to the world, a lens which he consequently lends to his readers – a prism of magnificence!