"All Doors Opened" | From transfer assistant to tourism mogul

The opportunity to represent India at a UN student’s meet cost a young Inder Sharma one academic year. However, that disappointment opened up new vistas. “All Doors Opened” is an autobiography that inspires us to dream big.

Knowing about the lives of great men inspires us to make our lives sublime too. Successful people in various fields, be it politics, business, sports or religion have carved a niche for themselves by their hard work, innovation, sincerity, honesty and vision with big dreams. ‘All Doors Open’ is an autobiography of Late Padma Shri Inder Sharma (Former Chairman, Select CITYWALK and Former Owner and Chairman, SITA World Travel) which captures precisely these aspects and even more about his life. 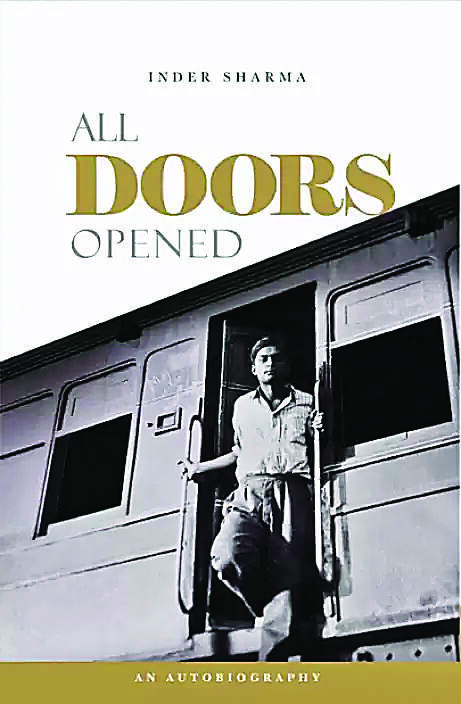 Born and brought up in a village in Gurdaspur district of Punjab, Sharma came to Delhi as his father a veterinary doctor got posted there. After studying in MB School, he joined Hindu college and did his post-graduation in Economics. He honed his debating skills in college with a keen interest in the freedom movement. In 1951, he got the opportunity to represent India in United Nations Students’ Association at Stockholm, Sweden. There he even got the chance to talk on BBC about the Indian Students’ Movement for 5 minutes, which earned him five guineas. Although he lost a year in college because of this trip, this opportunity ‘Opened the doors’ for his career in the tourism industry. In 1953 he joined Mercury Travels, which became a springboard for his next job at SITA.

Known as a pioneer in the travel and tourism industry, Sharma wanted tourism to flourish in India with excellent hotels, transport and easy access to visas and foreign exchange. The man who started as a transfer assistant with a salary of Rs.150 per month became the multi-millionaire Owner of SITA World Travel with his sheer hard work. The details of how Sharma was instrumental in transforming SITA from a wholly USA owned company to an Indian one is shared in the book. He was indeed an important visionary with big dreams for India and himself, however in the book he writes “I’m am plain lucky, one who is blessed by God”.

The vision of the man didn’t end there, he saw globalisation of the travel and tourism industry and decided to sell SITA Travels in 2000. He, however, predicted the incoming boom of the modern retail industry in India and in 2007 he built and became the Chairman of - Select CITYWALK, one of the first premium malls of Delhi which has won the award of the ‘Best Mall in India’ every year since 2007.

This book is an inspiration for young people to maintain a good work-life balance as Sharma believed in the ‘work hard, party harder’ mantra as detailed in the book. The autobiography is an ode to hard work, family values, harmless mischief, acts of kindness, charity, Inder Sharma’s true love for his wife Aruna, and devotion to his family. The last 17 years of his life changed with his complete surrender to Guruji. “Leave your ‘ifs’ and ‘buts’ outside along with your shoes”, he writes “and further surrender to Guruji, and he’ll take care of you.”