Govindarajan Padmanaban's second volume conveys the message that doing science in India can be troublesome even for acclaimed scientists, once they cross 60, writes KS Jayaraman. I may not have done earth-shaking science but I do have a sense of satisfaction that I have been useful to the society in a small way – Govindarajan Padmanaban. 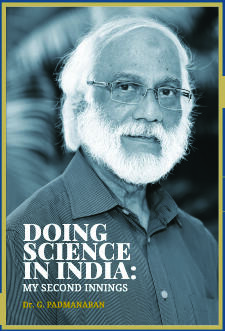 While this statement reveals the humility of the well-known biochemist – GP to his friends – it hides the disappointments he faced in the latter part of his research career. Doing Science in India – My Second Innings – is a candid account of GP's roller-coaster ride in his profession after he retired in 1998, at the age of 60, as director of the Indian Institute of Science (IISc), about his latest work on malaria. His group discovered the heme-biosynthetic pathway in the malarial parasite P.falciparum and showed it to be a drug target.

Many Indian scientists have been tempted by the glamour of the West – but not GP. "I worked at the bench physically for 31 years in IISc till I became its director in 1994," he says. Post-retirement, he managed to continue his work on malaria, thanks to the honoraria he received from agencies like the Department of Biotechnology (DBT). His research opened up newer strategies to block malaria transmission and unearthed the potential of curcumin – derived from turmeric – as an adjunct drug for treating many diseases, including cerebral malaria.

While GP's earlier book noted that science in India "is not a paying profession," his second volume conveys the message that doing science in India can be troublesome even for acclaimed scientists once they cross 60 – the mandatory age for retirement in public-funded intuitions. GP, a recipient of the Padma Shri (1991) and Padma Bhushan (2003) besides the Bhatnagar Prize for Science (1981), found this out one fine day in 2016 when the Indian National Science Academy (INSA) prematurely withdrew its Fellowship to him at a crucial stage of his malaria research.

"In a span of two months, I became a persona non grata without a laboratory and without an official address. I did go through a phase of deep disappointment," writes GP. He considered quitting IISc, but opted against it to avoid a scandal. Instead, he decided to stay at IISc – thanks to a Fellowship offer from the National Academy of Sciences at Allahabad – but continued his malaria project with his former student, Arun Nagaraj, at the Institute of Life Sciences (ILS) in Bhubaneswar. GP, who dreamt of building a centre of malaria research at IISc, says his research now continues with emails, Skype, and personal visits to ILS.

Keeping scientists out of the lab after the age of 60 (now increased to 62) is "a great loss" for Indian science, GP writes. There should be provision for contract appointments so that scientists can continue research in the same lab (after retirement), he says. Though back in business, GP's travails are not over yet. Despite hard data and publications in reputed journals, progress on clinical validation of the potential of curcumin as an adjunct drug to treat malaria has been "painfully slow," he says. The drug controller "has been sitting on the clinical trial application for years for one reason or another".

While his efforts to elevate curcumin as an adjunct drug are yet to bear fruit, GP is happy that DBT's entrepreneurship programme – Biotechnology Industry Research Assistance Council (BIRAC) – with which he was associated since its inception in 2012, is a grand success. "In a span of five years, it has supported over 700 start-ups and 50 products have been commercialised. There is hope that BIRAC can catalyse a revolution," he says.

While trying to answer why India lags behind in science when its scientists have gained repute outside, GP notes that commitment to S&T, particularly for basic sciences, is inadequate. "Research career has to be made attractive enough for youngsters to get into science." Another reason, he says, is that "recognition in this country often comes with position.

As a result, good scientists take up responsibilities that distract them from doing intense science". GP lists biogenerics and science-based validation of herbal medicines among areas in which India can excel. Indian scientists should also move into newer, fast-developing areas like synthetic biology and gene editing, he says.

Despite attacks by activists, GP, who has an MSc in soil science and agricultural technology, is an ardent supporter of genetically modified (GM) food. It is "unfortunate" that Bt brinjal continues to be under an embargo and the fate of GM mustard is undecided, he says.

Padmanaban has also made a revelation that former minister Jairam Ramesh, who put the embargo on Bt brinjal, "ironically was the one who dragged me to defend Bt cotton introduction with the Karnataka government when he was chairman of the State Planning Commission." GP also feels that closure of US agri-giant Monsanto's research centre at the IISc in 2000 'was a lost opportunity for the public-private partnership that would have benefited Indian agriculture'. "The only motivation that drives me is to do my best in any given situation and not get excited or depressed," says GP.

Padmanaban, who practices music and claims to be a regular reader of the Bhagavad Gita – ends his memoir on a philosophical note. "I see no contradiction between the desire to pursue science and the belief in God and destiny."