This book is a comprehensive and authoritative take on the paradigm shifts in Bengal politics. There was a time when Bengal was synonymous with left politics; but today, the left parties are not even significant as the opposition. The author of this book elaborates this shift from a holistic social, political and economic perspective. 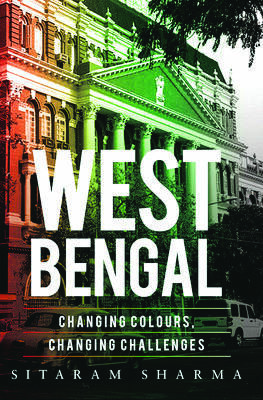 Sitaram Sharma, journalist, diplomat and author, attempts to draw a picture of the fall of left parties and the rise of the Mamata Banerjee-led Trinamool Congress in his first chapter of the book The Rise and the Fall. A party which had governed the state for 35 years became merely a non-entity in the general elections of 2015. The author humorously explains the reasons through the book.

“Government for whom? This is a question to which no satisfactory answer has been provided by sociologists or pundits because the Bengali mind presents a curious conundrum,” he writes to explain the fall of the Communist Party of India (Marxist) led Left Front Government. Through the book, Sharma has been critical of the thoughts and nature of Bengalis. He writes, “Yet, the average Bengali is neither unaware nor is the draft. An inadequately appointed school for his child, a road that has not been repaired for, an officially electrified village that does not receive power – the average Bengali learns to improvise and make do.”

Sharma, in this book, has effectively played the role of a narrator – a narrator of the Bengal’s history. In the second chapter of the book titled Refuges are for Keeps he explains the condition of Bengal after the partition. The author shows how the politics of Bengal has a connection with the partition. The role of the undivided Communist Party in the partition has also been delightfully explained. Sharma also writes about his experience of the partition. “I was too young to be directly involved in the refugee movement at its peak in the 1950s and early-60s, but I felt the impact on the political and social environment of West Bengal and Calcutta as I matured,” he writes.

This book is one of the most systematic histories of Bengal since independence. Sharma writes on every aspect of the political history of Bengal, particularly the importance of the left parties in Bengal, and, then split of the left parties. The author also narrates the politics of the late-60s and 70s when the Naxalite movement started in Bengal; then the emergency and the anti-Indira movement, where the left parties played a major role. He tells us in this book that with the rise of the CPI(M), how the Congress in Bengal became less-powerful. However, unfortunately, a detailed account of the Naxal period is amiss.

At the end of the book, Sharma talks about the rise of Mamata Banerjee. It was her rallying cry of poriborton and her slogan, Ma, Mati, Manush (Mother, Earth, People), which captured the imagination of the people and led to her landslide victory, ending the decades-long dominance of the Left Front. In the last chapter, the author draws the picture of governance under Mamata Banerjee.

While on one hand, the book will be remembered as a history of Bengal politics, the book might also be criticised for portraying a subtle bias to the “red era” in Bengal. However, the author does try to explain all the political factors in Bengal. Lastly, history has always been biased but connecting the dots between each aspect of Bengal’s political history with the rise of Mamata Banerjee in Bengal is a commendable effort.