It is contested that nationalism is entirely a product of British colonialism but was largely an antithesis of colonialism, reiterates Kavya Dubey. Emerging out of a collective resistance to foreign rule, the anti-colonial movement in the subcontinent laid the foundation of a nationalism that has evolved, morphed, and become quite degenerated in contemporary times. From insisting for an independent Indian nation that was to be inclusive of everything within the borders that defined India, contemporary times have seen the enforcement of an exclusive nationalism that pertains to a very narrowly defined focus endorsed vehemently by select groups. However, enforcing exclusive nationalism is not singular to India – it is a predominant global trend. Brexit, the increasing prominence of the right-wing in Germany, and Donald Trump’s latest antics regarding international trade are examples of exclusive nationalism across the world that has little regard for ‘the other’. 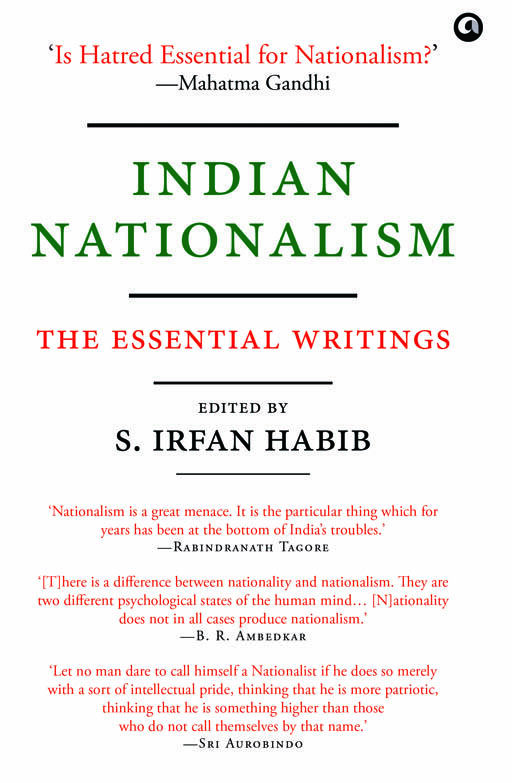 Irfan Habib introduces this anthology with a personal account that for Indians his age (born shortly after Independence), nationalism was not instilled or demanded through diktat, but was something that just existed all around. “We never felt the need to define what made us Indian despite the bloodied Partition we had just experienced in the name of communitarian nationalism.” Delving into the origins of nationalism is an attempt to decipher and comprehend the current wave of hyper-nationalism sweeping India. Initially, the idea of nationalism emanated from the authoritative writings of people, many of whom were politicians, political thinkers and activists who “defined nationalism for us”.

What took off as liberal-moderate nationalism went on to be centred on religion, and then went through several other phases before culminating into a consensus based on inclusive nationalism. It was not just politics but literature, too, that very poignantly articulated the cause of nationalism. Bankim Chandra Chatterjee’s Anandmath is a nationalist epic where he, as Sudipta Kaviraj puts it, “re-drew the imaginative boundary between the self and the other, between Bengalis and Indians, and performed a foundational role in delineating the origins of ‘the Indian nationalism’.” Historian Chris Bayly’s study of Indian Nationalism in pre-colonial times gleans ‘traditional patriotism’ which was a ‘socially active sentiment of attachment to land, language, and cult’ that was characteristic to the subcontinent long before Westernisation made its way here.

Eventually, the colonial era saw the rise of Hindu and Muslim nationalisms. These were not essentially a force against British colonialism but such nationalisms were “more interested in using history to legitimise their political ideology of religion-based nationalism to endorse the political mobilisation that they sought”. Muslim religious nationalism came to define the identity of Pakistan and Hindu religious nationalism pressed for its mirror image for India. Both these views betrayed the deep-seated effects of colonial policy. It is thus contested that nationalism is not entirely a product of British colonialism, but was largely an antithesis of colonialism. Interestingly, The Dawn became ‘a mighty organ of Indian nationalism’ and a review of cultural, sociological, and economic studies of the subcontinent and its civilisation. This encouraged a fresh wave of intellectual and political thinking across India and went on to shape the modern Indian nation which was not based on the Hindu concept of kinship but on the notions of a state and society informed by liberalism, democracy and civil liberties. This was a nationalism that enabled a political order that was different from both colonial and feudal orders.

Given the elaborate history of Indian nationalism that juxtaposed against the frequently occurring acts of grave vandalism on the pretext of (an exclusive) nationalism, George Bernard Shaw aptly sums up the superficiality of jingoism that masquerades desperate to acquire a ‘nationalistic’ tone: “Patriotism is, fundamentally, a conviction that a particular country is the best in the world because you were born in it”.