Tracing the extraordinary narrative of a woman who is fleeting in her identity, Nilakshi Borgohain has created a novel that subtly battles social facts while nurturing personal spaces, writes ANIL K. SHARMA Nilakshi Borgohain has handed over a unique novel dedicated to the Omni- ‘to every reader everywhere.’ The expanse of the novel’s theme crosses all geopolitical boundaries of nations, lands, caste, colour and creed as the narrative begins with ‘she’ who remains nameless albeit having several names coined in her journey like Rajkumari, Rani, Chutki, Baabi. 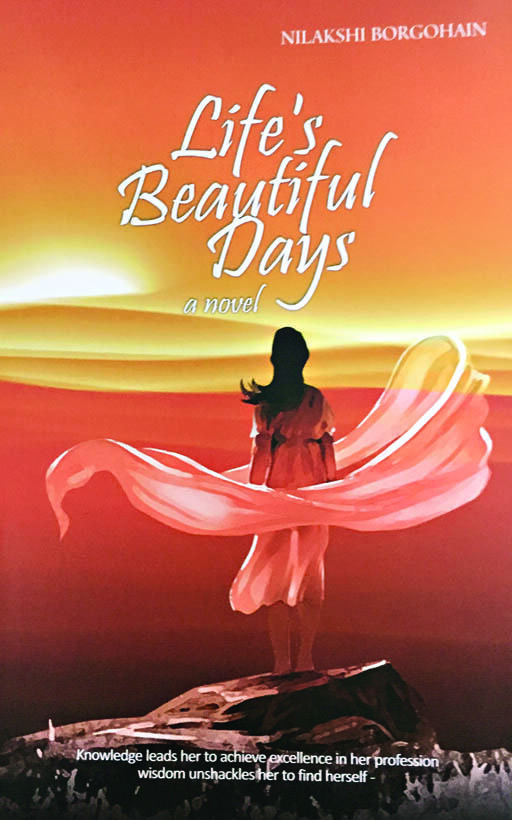 She is a vagrant on the streets who may be found anywhere in the world and called a destitute, orphan, deprived, have-not, illegitimate and more. These are the ill-fated people who have to struggle endlessly to keep themselves afloat. The author presents a diagonal contrast and says about the protagonist– “She walked for hours. She was used to walking. She had walked the crowded streets of Delhi begging for food, scouring every corner for rags and leftover morsels. Now, in beautiful Venice, she was walking for pleasure.”

The author is well-versed in inducting spiritual messages of the religious scriptures and the best tenets ever ordained and upheld by majority of the people across the globe like the Commandments, the Gita, the Guru Granth Sahib, besides turning to Buddhism for solace and peace. The potential and creative thought of the author creeps in to supplement Corporate Social Responsibility (CSR) and further she seeks to elaborate intentionally and in clear terms that its implementation is mandatory as per provision under the Company’s Act. Thus, a new and innovative turn has been given to the orthodox veneration and the new conception of philanthropy within the ambit of laws and regulations. The purpose of introducing the concept of CSR within the novel is no doubt to introduce the readers to the model. And, to pen a picture of a CPSU township is drawn to acquaint readers to the quietly inclusive society of our times, about how Humane Social Responsibility operates.

One-liners are very effective tools of prose writing and Nilakshi has used this methodology impeccably as she begins chapter five with “She was admitted to the school.” It is not a small event for an orphan to be admitted to a school, so summed up in this one liner. The future course of events are dependent on her schooling, knowledge, as the author has put in her preamble to the novel – ‘knowledge leads her to achieve excellence in her profession, wisdom unshackles her to find herself.’ The author has categorically differentiated between ‘knowledge’ and ‘wisdom’- because the former is looking and behaving outward and the latter is looking within to understand one’s own self.

Feminism is another aspect which is touched in rarity by the authors beneath its perfection, but the author has narrated the problems of personal hygiene of a young girl, who has no idea of waxing, smelling, fragrance etc. and has never visited a beauty parlour. The pathetic state and dilemma of a young girl becomes more grave and grim when: “She had no mother, no sister, and no best friend to guide her on the finer nuances of being a young woman.” Then and there, the aspirational climbing starts in the heart of a young woman as she becomes aware of such upkeep and makeovers of the feminine beauty and its typical sought after attractions. The author concludes chapter seven after dressing up the protagonist and says – “She worked relentlessly to fulfil her aspiration to truly belong to that coveted social order; and yet, she was constantly conscious of where she came from.”

Nilakshi has not written an introduction to the novel but certainly has inducted her introduction in the thematic construction of the novel between lines spread across all over the plotting. To make gods out of clay is possible for the good authors like Nilakshi, who has deftly elevated a nameless orphan to the status of a successful lawyer, and then holding a coveted high position in the corporate world, the vagaries of luxurious and aristocratic life do shadow the personality of the protagonist which has also been depicted graphically and ends in an accident in a drunken state.

The philosophical ingredient which the novel envisages in its presentation with Alice who is duped by the protagonist, who publishes the manuscript written by Alice, in her own name, the literary confrontation between them is symbolic and the use of the metaphor of an empty cup is innovative. The conversation between the two old friends is a must read.

The repentance and remorse are the strings to pull down one’s inflated ego and the deflated self comes back to be normal and the author has put the protagonist in that state when she says – “Dear God, forgive me, for I have wavered.” Alice forgives the protagonist ‘she’ for her misdemeanour and other failings and fallings, and the forgiveness is not gross and express but implied and subtle. Alice, to my mind is the author’s alter ego.

The beauty of writing a poetic prose lies in its diction, verbosity, subtlety, gory graphics, pithy presentation, symbolism, minute narration, emotional elation and deflation, all combined together can be found in Nilakshi’s riveting ‘Life’s Beautiful Days,’ a distinctive novel of our times.