"The Hollow Kingdom: ISIS and the Cult of Jihad" | Unravelling the depths of terror

The book presents an insightful account into the depths of ISIS, its wicked network and loyal bases, writes Shashwat Sajal. What kind of mindset encourages a terrorist to murder the innocent? What kind of an ill psychology drives them to commit such heinous crimes. And, on top of that, how does an innocent person turn into a radical extremist. What could be the ideology driving their extreme behaviour? What, indeed, intrigued them to grow such a radical mindset. 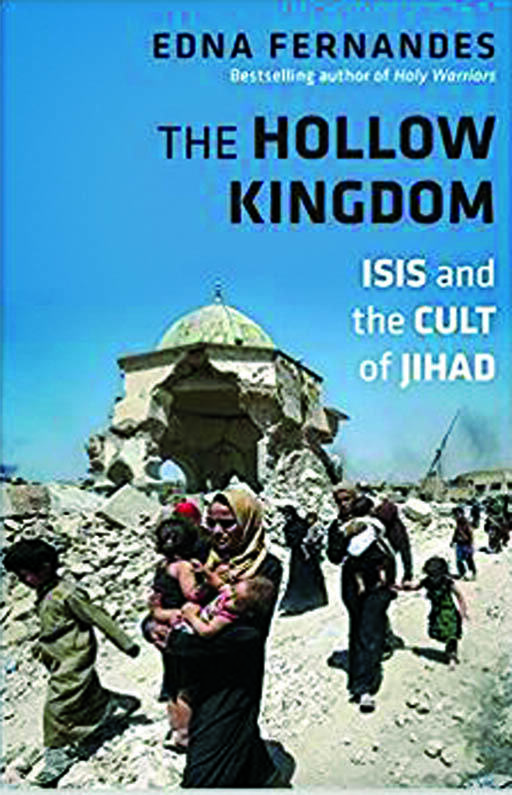 The Hollow Kingdom: ISIS and the Cult of Jihad, written by Edna Fernandes, is a meaningful contribution to the emerging literature on ISIS and dwells into all the facts and rationale behind the rise of the ISIS and its ideology.

The ISIS has carried out public executions, crucifixions and several other acts of terrorism in an attempt to implement the eighth century Islam rooted Sharia Law. Born from the Al Qaeda, the extremist radical group, the Islamic State in Iraq and the Levant has one specific aim and that is to create an Islam ruled state Caliphate across the world. For that, the IS is ready to go to any length of insurgency and brutality.

The book traces the evolution of the Islamic State in Iraq (ISI) from the al-Qaeda in Iraq (AQI) under the leadership of Abu Musa al-Zarqawi until his death and the aftermath. It discusses the rift that developed between the al-Qaeda and how the ISI emerges during the sectarian civil war in Iraq between the Shias and the Sunnis. It discusses the main catalyst which gave rise to the ISIS: the invasion of Iraq. It does provide fascinating details about Abu Bakr al-Baghdadi, a self-anointed Calipha and ISIS leader. He is the one responsible for turning jihad into a global phenomenon. It tells the story of an insurgent highlighting his merciless and swift journey to become the leader of the terrorist state. He united angry Muslims on a scale even Osama bin Laden had failed to accomplish.

The book argues that somewhere the international community was responsible for the rise of the jihadi group. The US-run jails such as Camp Bucca were breeding grounds for these extremists. It explains how the Wahhabi ideology, founded by Muhammed ibn Abd al-Wahhab (1703-1792), forms the root of the Jihadi mindset. Wahhabism has the vision of a society ruled by Sharia law. It reverts to the very beginning and rejects all ideas of modernity and all reinterpretations of the faith. It has deepened the rift between the Shias and Sunnis. Mosques and madrasas run by the Muslim World League are a nurturing ground for Wahhabi ideology. There are other groups too which aim to propagate Wahhabi Islam worldwide.

The book sheds light on how the ISIS created Islamophobia has led to many changes in other countries. The anti-Muslim and anti-migrant political rhetoric has stepped into the political spotlight and the mainstream. India is a major example of that. Many such countries have labelled Muslim refugees as poison and a plausible threat to their nation. They consider the refugee crisis as a planned invasion.

The book is an easy read with mammoth details. It describes the psychology behind the terror group, their ideology, how the group was created and how it manipulates the minds of innocents. It goes at length to describe what makes people join the group. Everyone knows that the group uses social media to reach out to the people. But what exactly do they say that convinces them. What are the different kinds of tactics they use? How does it get the funds to carry out blood stained activities across the globe. What are the primary sources of their finance?

The book provides insightful details on how oil-rich countries such as Saudi Arabia are providing clandestine financial and logistical support to the terrorist group. It explains how Saudi Arabia and its religious-industrial complex is working in favour of the ISIS.

The chapters are an astute account emerging from thorough research that sheds light on how the organisation works. The book will be invaluable for or any reader who is curious about the depth underscoring the ISIS and jihad. Anybody seeking an overall understanding of how the terror group works can be enlightened by this well-researched piece of excellence.