"The Second Anglo-Sikh War" | The last days of Khalsa Raj

This is a tale of an empire that lived through conflict, epidemic, glory, power, stature, and finally, capitulation, writes Kavya Dubey. The battles of Ferozeshah and Chillianwalla were two landmarks in the history of the Subcontinent that decided the course of events with regard to the establishment of the British empire thereafter. With a comprehensive understanding of the War comes important details and insight about the conflict that led to it. This work is also a compelling testimony of the declining Sikh empire. The Anglo-Sikh Conflict was critical to the British gaining their foothold in the Subcontinent. After the fall of the Sikh empire, the British East India Company annexed Punjab and the Northwest Frontier Province came to be.

Giving due prominence to this sidelined peg in India’s colonial history, this treatise swiftly picks up from the conclusion of its preceding volume: The First Anglo-Sikh War (1845-46), and opens with the Last Lahore Durbar. This vividly chronicled episode in History is more than a reproduced established fact. The Last Lahore Durbar is presented with the solemnness and understated regality of a surrendering empire. And as recorded, the Foreign Secretary “had the proud satisfaction of seeing the British Tricolours hoisted on the citadel under a royal salute from our own artillery at once proclaiming the ascendancy of British rule and sounding the knell of the Khalsa Raj.”

Maharaja Ranjit Singh, the one-eyed diminutive teenager who founded the Sikh empire was an entity who nearly raced with the British in the conquest of modern India. Having acquired the entire Punjab region and Kashmir in three decades of his reign, it was acknowledged by the British that had the East India Company not laid claim on the Subcontinent already, the Maharaja would have undoubtedly extended his empire to Calcutta in the East and Maysore in the South. The Maharaja never contemplated expanding Southwards beyond Satluj River so as to keep him from coming in conflict with the East India Company. This intention was mutual. The British, too, never mooted any adventure north of the Satluj. But this method of coexistence was soon to change.

The geography of the war-zone and the bloody and brutal Battle of Chillanwala are recreated with cinematic details. The peculiar thing about this battle was that both armies held their positions at the end of the battle and both sides claimed victory. This turning point of a battle was a strategic check on British ambitions in India and a shock to British military prestige. The complex reasons for the outbreak of the Second Anglo-Sikh war are articulated in the backdrop of the First Anglo-Sikh War and presented distinctly as ‘Prelude’, ‘Insurreuction’, ‘War’, and ‘Dissolution’. The unfortunate and tragic lives of the ten-year-old Maharaja and his mother is a narration that finally concludes the chapter of the once mighty Sikh empire.

The Second Anglo-Sikh War is among the last major conflicts that was, unfortunately, not covered the new discipline of battlefield photography (1847 was when the first grainy daguerreotypes of the American-Mexican War appeared). The political repercussions of the war and the following annexation of the Punjab was of tremendous significance, not just for Punjab, but for the rest of the Subcontinent. The defeat of the Sikh empire meant that the soldiers of the Sikh Army were now available to be absorbed and exploited by the British. These soldiers were known to be more trustworthy and reliable than the soldiers the British had had before. The Sikh and Punjabi soldiers would now form the new backbone of the British army in India. 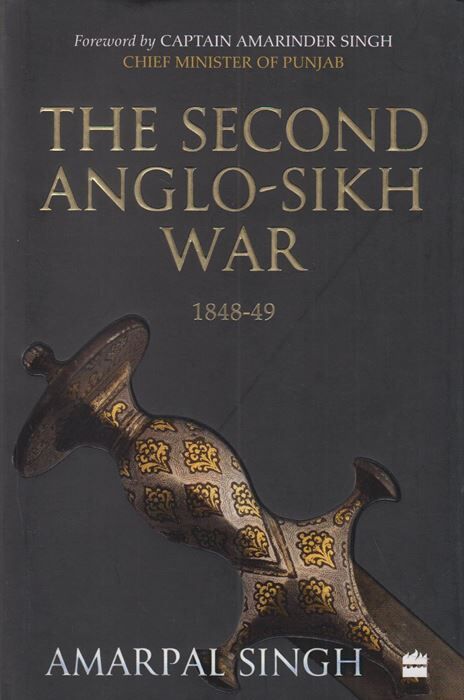 Amarpal Singh’s understanding and precision of articulation elevate his work to the status of an authentic account of the Second Anglo-Sikh War. The author’s passion for military history brings alive the bygone era of Sikh predominance in colonial India as he tells the tale of an empire that lived through conflict, epidemic, glory, power, stature, and finally capitulation. Spotlighting the grit and gallantry of the Sikhs on the battlefield, this book fills a void in the military history of the Sikhs.