Top
Home > Book Review > Case against a president: Trapping Trump in the net of Impeachment

"The Case for Impeachment" | Case against a president: Trapping Trump in the net of Impeachment

The major focus of the book is on reasons why Trump’s presidency is an option for the third impeachment in the USA after that of Andrew Johnson and Bill Clinton, writes Saket Suman. Even as people in the United States seem to have come to terms with the presidency of Donald Trump – protests over, sloganeering subdued and hostility forgotten – this book by a reputed professor at American University reignites the flames of resentment as it makes a curious case for Trump’s impeachment. 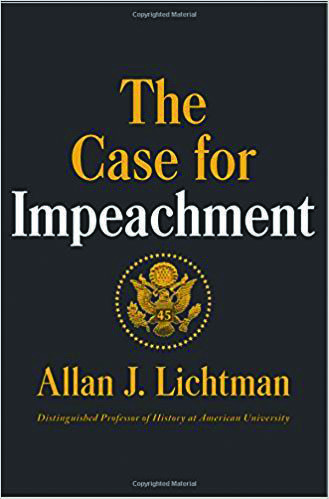 Distinguished Professor of History at American University Allan J Lichtman shows exactly how (if) the impeachment of President Trump might work by throwing light on his actions – past or future –that make him “uniquely vulnerable” to impeachment proceedings. From his dealings with Russia, to his conflicts of interest at home and abroad, to the numerous civil suits involving him, Lichtman zeroes in on Trump’s key areas of weakness in this offering.

But Lichtman did not begin deliberating over the idea of impeachment after Trump’s surprise victory in the Presidential polls. His research, as he mentions in the book, began before the November 2016 election. It is equally interesting to note that the author, who had rightly predicted the outcomes of eight previous elections in the USA, this time – against all polls and predictions – called it for Donald Trump.

His prediction was noticed by, of all people, Trump himself, who wrote a personal note to the author, saying “Professor – Congrats – good call.” Little did the would-be President know what the next prediction of Lichtman was going to be – that after winning the election, he would be impeached. After offering a fascinating look at presidential impeachments throughout American history, including the often-overlooked story of Andrew Johnson’s impeachment, little known details about Richard Nixon’s resignation, as well as Bill Clinton’s hearings, the author narrows down upon his central argument. Many historians and legal scholars agree that Americans are facing uncharted political waters and most citizens – politics aside – want to know where the country is headed. Lichtman makes it clear that it is not a question of if President Trump will be impeached, but a question of when.

The author reminds the readers of his book that the term (Impeachment) may have gone out of use in Britain, but the simple reason behind retaining it in the United States is to remove a rotten leader. Impeachment is a powerful tool, the author says, as it puts the President or other civil officers on trial before the Senate for “bribery, treason, or other high crimes and misdemeanors”. Not only is it deliberately broad in scope, but it is also as much about being unfit for office as having committed a specific crime.

So far, just two presidents of the United States – Andrew Johnson and Bill Clinton – have been impeached. Some believe Richard Nixon may have been impeached too but he resigned just before the arrival of his summons. The major focus of the book is on reasons why Trump’s presidency is an option for the third impeachment. “Trump has reached the critical mass of violation that triggers the implosion of his presidency,” Lichtman mentions.

Formally organised in chapters, the author’s arguments are an apt manual for lawyers and congressmen looking for grounds. Starting with “bribery and treason,” the author calls on the authorities to investigate his business dealings and connections with Russia, both of which are already under scrutiny.

And if you look at “other high crimes,” which is another ground on which a US President can be impeached, Lichtman shifts his focus to climate change, saying that Trump’s constant refusal to accept climate change as a reality and his future actions on the subject may provide enough ground for counting them as a crime against all of humanity. Finally, there are “misdemeanors” and the author wastes no time in reminding the readers of Trump’s treatment of women, which, according to him, is ground for his possible impeachment.

“The Case for Impeachment” makes some compelling arguments in its sufficiently-cited 290-pages and notwithstanding whether or not Trump will be impeached, this book will escort you through the process and history of impeachment in the United States.