What explains the continuing appeal of radio as an effective medium of communication? And, when the mandate of public service broadcasting is to inform, educate and entertain – what happens when an enemy country opts to exploit the radio for propaganda? 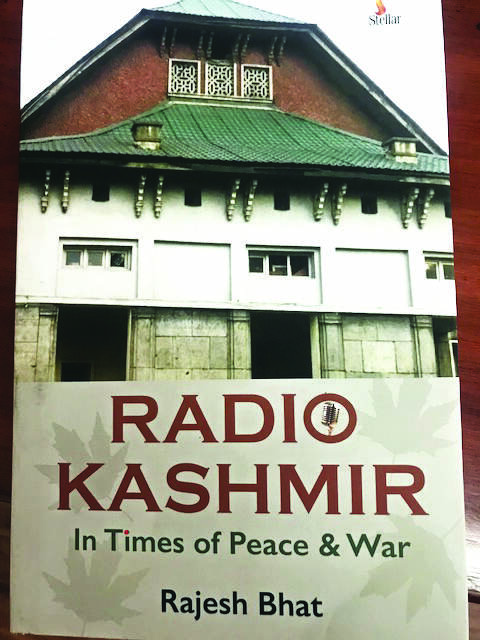 Rajesh Bhat’s book, Radio Kashmir: In Times of Peace & War, adequately answers these concerns and delivers an insightful perspective into the history of broadcasting services in the troubled state of Jammu & Kashmir.

Soon after gaining independence in 1947, Pakistan set up an underground radio station and, a few months later, established Azad Kashmir Radio (based in POK). Both began broadcasting malicious propaganda against India to create unrest in the valley. Arousing religious sentiments, the radio presenters would tell the listeners how they were held ‘hostages’ by India, who had ‘illegally occupied Kashmir’.

To counter this onslaught and misinformation, the government hurriedly set up Radio Kashmir, Jammu and Radio Kashmir, Srinagar, in December 1947, and April 1948, respectively. Initially, both stations began operating under the state government’s information ministry. However, both were brought under the administrative control of All India Radio in 1954 but retained the nomenclature ‘Radio Kashmir’.

Rajesh’s book is a treasure trove of information about programmes that dominated the airwaves during that turbulent period. “An anti-India programme, Zarb-e-Kaleem, was broadcast from across the border since 1948…. The literal translation of the title is the strike of Moses’ staff. Moses in Islam is also addressed as Kaleemullah, the one who converses with God (Allah).”

Radio Kashmir mounted a counter response and aired Jawabi Hamla that enjoyed huge popularity. The programme highlighted the rich cultural traditions and values of Kashmiris who believe in the philosophies of Sufis and Rishis.

The book reflects a learned appreciation for the marvel of broadcasting, as was illustrated with the remark of prominent poet and scholar of Kashmir, Zarief Ahmed Zarief, “as if it was a war of creative scripting…. Scripts would be drafted live in response to the program aired from across the border within minutes of its broadcast. Zarb-e-Kalam would be aired at 9:30 pm and Jawabi Hamla was fired back half an hour later during which the reaction script was quickly drafted.”

No wonder, both these radio stations have earned the distinction of strengthening social and religious harmony in the state and successfully thwarting Pakistan’s attempts to create communal tension – at least until 1990, when militancy erupted in the state, leading to the tragic mass exodus of Kashmiri Pandits from the valley.

Garoor ki Khudai (Might of Arrogance) was another programme designed to instigate vicious propaganda against India. It was a dialogue: two Pakistani characters would speak and poke fun at India, its people, particularly Hindus, and depict Muslims of India and Kashmir as ‘oppressed lot’.

An all-time famous song broadcast from Jammu station during those days was a qawwali in Dogri - Kabali Maare Ayan, Bhiddan Maarne Jiyan – that these Kabali raiders are to be demolished like small fries.

The book combines Rajesh’s scholarly understanding of broadcasting to offer an account that meshes inside views of those who matter in broadcasting, documenting some of the key flashpoints that have dominated broadcasting over the past few years.

Zoona Dab (Moon on a Wooden Balcony) too was an iconic Radio Kashmir programme, where Pakistan media’s gross propaganda was at times effectively repulsed. Although a family serial, mostly focusing on the grievances of the public, it would touch upon events in Pakistan. The three main characters of this hugely popular serial that ran for years together – Pushkar Bhan, Som Nath Sadhu and Marriyam Begum – were conferred with the Padma Shri in 1974.

If Zoona Dab was the production of Radio Kashmir Srinagar, Nakkara (Drum Beating) was the creative brainwave of the news producers of Radio Kashmir, Jammu – primarily to counter Pakistani propaganda during the 1971 war.

According to the author, Pakistan-controlled radio stations had been successful in invoking people’s passion and passing on directions to militants during the initial years of militancy in Kashmir. He writes, “this is supported by the fact that the morning bulletins from Radio Pakistan mostly carried news about ‘hartals’, asking people of Kashmir to observe strikes on a particular day as per the dictates handed out by All Party Hurriyat Conference and other militant organizations.”

The author appreciates the role played by Radio Kashmir, Srinagar during the 2014 floods. While floods disrupted the normal transmission of Srinagar Doordarshan Kendra, the local radio station acted as a bridge between the government, relief suppliers, flood victims and their families.

Rajesh makes the most of his training both as a broadcaster and a researcher, bringing to his story a reporter’s eye with a sense of pacing and impressive breadth of subject knowledge.

Initially undertaken as a topic for his PhD thesis, now, Rajesh has focussed more on the role of stations during war and natural calamities, with less deliberation on the contribution of both Radio Kashmir Srinagar and Jammu in reviving and promoting the state’s flamboyant art and culture.