"The Breakthrough" | Combating and curing cancer Author Charles Graeber takes us along the evolution of immune-oncology in a most intriguing manner. In a more relatable sense, the stories of brave and desperate patients undergoing therapies bring us before the suffering of someone known to us, fighting cancer in many ways. This book is an insight into the new class of cancer treatments and the long journey of understanding how the immune system recognises and combats cancer. Cancer develops a series of tricks to turn off normal immune responses. These tricks have only now started coming to light and scientists are learning ways to defeat them. 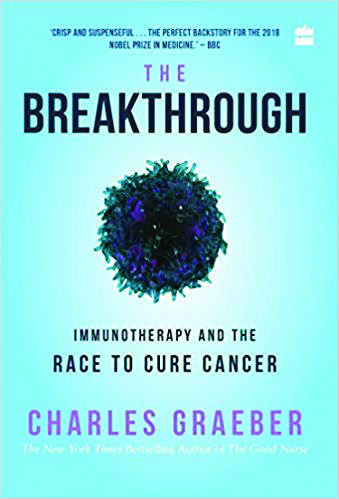 The Breakthrough is the story of game-changing and Nobel Prize-winning discoveries that unleash our natural ability to recognise and defeat cancer—coming from the experiences of patients, physicians, and immunotherapy researchers on the frontline. In the race to find a cure to cancer, this book is a definitive account of a historic moment in medical science. Lewis Thomas, American physician and polymath, had said in 1982 that, “It seemed to me then, and still does, that some such built-in immunologic mechanism ought to exist for natural defence against cancer in humans”. It is this belief the drives many and Graeber to explore about the scouts and soldiers in our body that guard us against the killers—the dynamic network of cells that are potentially more agile than any cancer.

It is established that our bodies have a tremendous capacity to heal itself, its power to regenerate can be greater than scourge and impact of diseases. Our systems evolve and that is our best tool to cure cancer. And the discovery of how to unleash it is the breakthrough. The three popular methods of treating cancer until very recently are surgery (for the last three thousand years), radiation therapy since 1896, and in 1946, chemical welfare research led to the use of mustard gas derivative to kill cancer cells. Those toxins were the foundation of chemotherapy. It is certainly a remarkable medical accomplishment that these “cut, burn, and poison” techniques are able to cure cancer in about half the people who develop the disease; but the other half who do not survive, the recent data from the United States show that nearly six hundred thousand people died of cancer in a year.

Cancer is conventionally a case of some simple drugs against the unpredictable mutating of our own cells, intending to kill the bad ones while sparing the good ones—and making us sick in the process. A radical approach to have made its way in this arena is one that does not directly act on cancer, but on the immune system. Our immune system has also evolved over 500 million years into a personalised and natural defence against disease. This complex biology apparently has a simple mission: to find and destroy anything that doesn’t belong in our bodies. The obvious question to now come up is: why doesn’t the immune system fight cancer already? Actually, it does, or it tries to, but the immune system functions in its own set ways against the changing methods of the cancer cells. Hence, empowering the immune system adequately to fight erratic cancer cells has to be the way to deal with cancer, ie, cancer immunotherapy, which does not act directly on cancer but unlocks the killer cells in our own natural immune system.