Home > Book Review > Beyond the doors of perception

"Maharishi and Me: Seeking Enlightenment with the Beatles' Guru" | Beyond the doors of perception 1960s America nurtured perfect soil for the growth of individual disenchantment. Devastated by years of war, communal strife, death and destruction – demands for self-emancipation were quickly picking pace on the other side of the Atlantic. For the West – that has grown away from practices of religious transcendence – Indian spirituality floated a possibility that was desired but never wholly realised. Maharishi Mahesh Yogi, with his Transcendental Meditation (TM), sowed the seeds of what is today an industry worth several millions. North Indian cities of Rishikesh, Haridwar and Varanasi continue to witness a staggering footfall of western tourists, many of whom never return home, curious to learn and practice eastern mysticism – for this, Maharishi’s revolution of the 1960s deserves due credit. 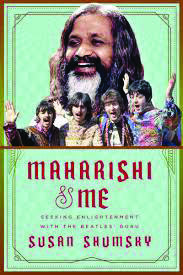 In the 1960s, when America was recovering from the ravages of Cold War and when racial, gender, sexual subjugation loomed large, there was a parallel bustling industry selling the idea of divorcing worldly attachments and finding an altered state of being. Author Susan Shumsky, a spiritual practitioner, artist and author, belonged to that generation of ‘flower children’ – in California, indulging in a ‘high life’, searching for drugs that would allow an alternate appropriation of reality. But, drugs kill. Removing the risk of drugs but promising the same ecstasy, TM began carving an enviable market for itself – seek your inner soul, immerse your mind and reach altered states of consciousness. Unlike narcotics that subjugate and trap you in addiction, TM elevated you onto a plane beyond bondage.

Maharishi rose to rapid fame as celebrities began making their way to his Ashram in Rishikesh. In February 1968, Maharishi welcomed his most renowned students – The Beatles. As John, Paul, George and Ringo stepped into the Ashram to greet Maharishi, crowds of photographers hankered to grab a shot for next day’s dailies – Maharishi was now a household name in America. Indeed, what was this allure of a bearded ‘giggling Guru’ that had drawn even the most illustrious to his doorsteps? His Ashram had even inspired The Beatles to pen an entire album, ‘The White Album’. Their camaraderie, however, was short-lived, as The Beatles packed their bags within a few weeks, citing several reasons but never really explicitly stating the truth motivating their departure. There appeared to be a clash with the Maharishi, though their faith in TM as a tool of emancipation remained unwavering.

Shumsky lived and practised with Maharishi for 22 years, residing in remote corners of India, Switzerland and beyond. In the end, she grew deeply suspicious of the movement; though she continued to engage with TM and other healing practices. Shumsky was a ‘flower child’, disenchanted with the world, and packed with a desire to push her frontiers of imagination. Her motivation behind practicing and propagating TM was really one – to understand the Spirit and craft a spiritual journey for her own mortal soul.

With Maharishi, though, her journey became hued in many more shades. She wasn’t on a linear road towards enlightenment – instead, she assumed a managerial role in Maharishi’s organisation and consequently, her evolution was more rounded than being focussed on achieving salvation. By describing her interactions with Maharishi, Shumsky lays bare the intricacies of her guru-disciple relation – a most prized relation in Indian philosophy and also a most difficult relation to grapple with. It isn’t a simple equation of learning and improving, it is nuanced through layers of mind games, methods to cripple the learner’s ego and set-ups that you leave you confused about your actions and choice. While to a Western mind that may appear to be total hogwash, one acquainted with Indian philosophy will realise that these processes ultimately converge at one goal — to shatter the ego, the essential detriment to achieving salvation. As Susan experienced, until you realise you are nobody, emancipation will be illusory.

Shumsky has revealed in great detail the emotional upheavals she evolved through as a TM trainee and initiator, lending important insight into life as a yogini – it is not only made of white robes and sitting under trees with singing birds. It is a deeply emotional and challenging journey that tests frontiers of expectation, restrain and expression. With memorable pictures, candid confessions and insights into the true world of Maharishi Mahesh Yogi, Maharishi & Me packs a delightful read.