"Humans: A Brief History of How We F*cked It All Up" | Are we humans doomed?

Despite unlimited brainpower, mankind has an innate ability to create crisis — From World War I & II to nuclear bombings to Climate Change. Can we learn not to goof things up? Soumya Pal reviews the scene A review of Tom Phillips’ book Humans: A Brief History of How We F*cked It All Up can easily be written in just one word: UNPUTDOWNABLE!

The author, who trained in Archaeology & Anthropology and History of Philosophy of Science at Cambridge, has a rare among rare quality – an extraordinary ability to share his superb scholarship with the intelligent lay man with simplicity, clarity and, yes, constant humour. 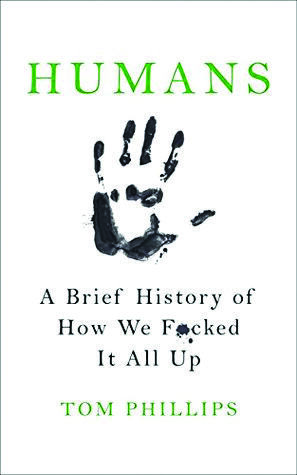 In just 256 pages, he has achieved a near impossible synopsis of human history (basically that of the homo sapiens as distinct from our many extinct cousins such as the Homo neanderthalensis) over the last 70,000 years.

However, the sub-title of his book, A Brief History of How We F*cked It All Up, is definitely misleading.

Although Phillips does an elaborate – and reasonably comprehensive – job of describing the human race’s plethora of f*ck-ups over the centuries, his book also has a rather positive – one may even say optimistic – flavour throughout its length.

Despite all the follies, he writes, we humans have demonstrated a tremendous ability to come back, to survive our colossal mistakes and to move on and on. One of the secrets to this lies in the indomitable human spirit, both individual and collective, and in our capacity for thinking and creativity, the trait that basically distinguishes us from all other animals and has led to all the fantastic things we have achieved.

The essential thesis of Phillips’ book is that this capacity for thinking and creativity – this sheer brilliance of human beings – is a two-edged sword. On the one hand, it has enabled the evolution of the amazing human civilization (based on science, the construction of an elaborate social organization and art & culture) while on the other, it has led to incredible capacity for self-damage through numerous wars over the ages as well as the present serious danger of a man-made nuclear holocaust – and even the potential destruction of our entire planet Earth through Climate Change.

The author gives a frightening example of a lethal side effects of Climate Change. In August 2016, temperatures in Siberia’s Yamal Peninsula were 25 degrees Centigrade above normal, as a result of which layers of ice that had formed 75 years earlier were defrosted.

This exposed frozen carcasses of reindeer that had died in the last Anthrax outbreak in 1941. As a result, in 2016, a 12-year-old boy was infected with Anthrax and died while 20 others had to be hospitalised.

What happened was that the pathogens were preserved live (but in stasis) for 75 years. The Anthrax disease was lying dormant under the ice since the days when “the Russian winter was breaking Hitler’s army, just waiting for the time when its frozen cage would melt”. Finally, in 2016, Global Warming led to the hottest year on record (till then), the Siberian ice covering the reindeer melted, and the (live) bacteria were released once more.

Phillips’ point is that our activities can have incredible (and yes deadly) side-effects or after-effects which we would not even be able to imagine or forecast beforehand.

He continues with Climate Change by devoting a large part of his book’s Epilogue: Fucking Up the Future to its catastrophic consequences, even hinting (rather graphically) that it may lead to the extinction of the human race. He refers to the decision to re-open a closed coal-fired power plant in Australia, a bizarre move in a world that is desperately trying to move away from Climate Change-causing fossil fuels.

This apparently inexplicable decision, however, was quite explicable, Phillips goes on to explain. It is part of the overall elaborate effort to accelerate the information technology and communications revolution. The plant was meant to provide cheap power to a company “mining” cryptocurrency.

Finally, before ending his book, Phillips refers to two other deadly effects

of human thought and action that

While the former, which are the result of overuse of antibiotics, may just quietly kill us off, the latter (man-made “thinking machines), says Phillips, may self-conclude that humans are no longer necessary on this planet and decide to wipe us out. The question: Will we humans foolishly give them such powers to bump us off?

We better not f*ck up this time!