"Surprise, Strategy and `Vijay: 20 Years of Kargil and Beyond" | Against all odds

20 years after Kargil, this book assumes a fresh journey into that time of war, bloodshed and soldiers battling unprecedented odds, elaborates Anil Bhat Lt Gen (Dr) VK Ahluwalia (Army Aviation Corps) and Col Narjit Singh (2nd Lancers/Armoured Corps) have put together this brilliant compendium of experiences, insights and comments. Of the writers – some were involved in the phase of intensified confrontation by Pakistan in its fourth war against India, tremors of which continue till date in Kargil Heights (1998-99) – and others, including insightful military veterans, scholars/writers.

Five years after Operation Vijay, the relentless war to eliminate the deceitful Pakistani Army from Kargil, Lt Gen VK Ahluwalia, was posted to command 8 Mountain Division. He admits that this posting to Ladakh “opened his vision to the bigger and brighter world of soldiering”. Soon after his arrival, he headed to scale the heights of the Tololing Complex, which symbolised the rawest courageous assaults undertaken in the face of fierce enemy fire. In the extreme high-altitude area of Kargil, gasping for air, he could not help wonder how soldiers advanced to their objectives perched on steep slopes under bullets and splinter bursts in 1999. 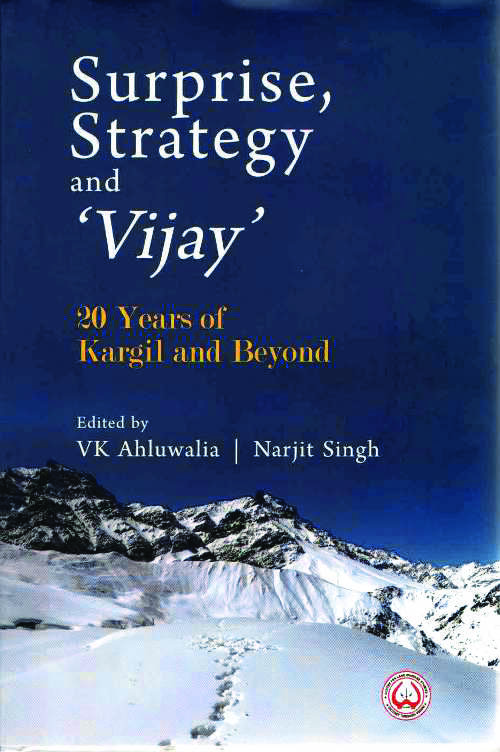 Having spent over two memorable years at Kargil heights in 2005-07, he gathered sound knowledge of its vast terrain and formidable features. Besides that, he mentions reading a number of books on this subject, written by eminent authors like Captain Amarinder Singh, Lt Gen YM Bammi, Maj Gen Ashok Kalyan Varma, Harinder Baweja, General VP Malik, and Nasim Zehra, a Pakistani journalist and the author of From Kargil to Coup, all of which lent detailed accounts of the operations undertaken during Operation Vijay. Every victory along the 170-km long rarefied mountainous terrain was accomplished by surpassing new challenges and also adding aspects of personal leadership in the junior leaders. Co-editor Col Narjit Singh, who served in 8 Mountain Division under Ahluwalia, was entrusted with the task of making a documentary on Op Vijay.

Between May and July 1999 bloody battles were fought almost simultaneously in the five sub-sectors of Kargil- Mushkoh, Dras, Kaksar, Batalik and Turtuk. The war in Kargil will always be remembered as a saga of unmatched bravery, dedication, determination and raw courage that was exhibited by our soldiers against all odds. The Line of Control (LoC), delineated in 1972 by senior commanders from India and Pakistan, runs for approximately 220 km eastwards, beginning from the Kaobol Gali. This unseen line had remained quiet for over 27 years (till 1999), except for some artillery firing by Pakistanis, mainly to interdict the arterial road of National Highway 1A (NH-1A, now NH-1D), and also terrorise the local inhabitants of Kargil. The LoC in the Kargil region runs along the rugged mountainous Himalayan terrain varying in altitudes between 14,000 and 19,000 feet. This region was guarded by 121 (Independent) Infantry Brigade comprising a few Infantry units strung along the entire length of LoC. Quite naturally, there were a few large unguarded gaps which were covered by foot patrols. A similar arrangement existed on the Pakistani side of the LoC. However, all this changed in one stroke in early 1999, when Pakistani troops in civilian attire, intruded through the unguarded gaps and occupied the vacant mountain tops and ridgelines. These chosen routes of intrusions varied from 4 to 12 km inside the Indian territory. Consolidation followed, wherein locally improvised bunkers or sangars (defensive walls with loopholes to fire weapons, made of stones and boulders, with or without the use of mud plaster, or cement-like material) were built. This was followed by induction of heavy weaponry, ammunition, rations and other military hardware. The Pakistanis established forward administrative bases inside the Indian territory to sustain their troops. Simultaneously, the artillery guns and heavy mortars

were moved up close to LoC so as to provide fire support. Therefore, like a ghost in darkness, the Pakistanis had in fact succeeded in giving India an absolutely unexpected tactical surprise. By May 1999, when the Indian Army reacted to the incursion by Northern Light Infantry, its troops

had been well entrenched for five months at least. Officers, junior commissioned officers and fearless soldiers valiantly took on the back-stabbing Pakistanis head on. Not only did the Indian troops relentlessly attack uphill over the rugged terrain against a well dug-in enemy – they also managed to overcome the highly rarefied air while regaining every inch of occupied territory.

It is ironic that when Prime Minister Vajpayee made his bold move of bussing to Lahore and signing the Declaration on February 21, 1999, Pakistani Army’s Operation Koh-e-Paima (Call of the Mountains) or Op KP, was well underway. And, it was another three months when Indian Army’s Op Vijay was launched. The irony was in fact greater, because Pakistan Prime Minister Mian Nawaz Sharif had been kept in the dark about Gen Parvez Musharraf’s ambitious plan of trying to alter the LoC. Zehra, in her mentioned book, states that Sharif had no clue that Pakistani troops had already crossed the LoC and entered India-occupied Kashmir.

With a foreword by former Army Chief General NC Vij, the book has been structured into five parts. These five parts, aptly titled by their scope, cover various nuances panning air combat, logistics of war, prevailing perceptions and possible ways ahead.

It needs to be clarified that Operation Vijay was an intensified phase of Pakistan’s fourth war by way of export against India, which continues till date. The book’s coverage is well-rounded and will be very useful for all ineterested in national security and the complex subject of Indo-Pak relations.