While Abhijit Vinayak Banerjee and Esther Duflo collaborated to bring out greater synergy between theory and practice of policy intervention, Michael Robert Kremer has been in the same league experimenting around poverty eradication, health and education 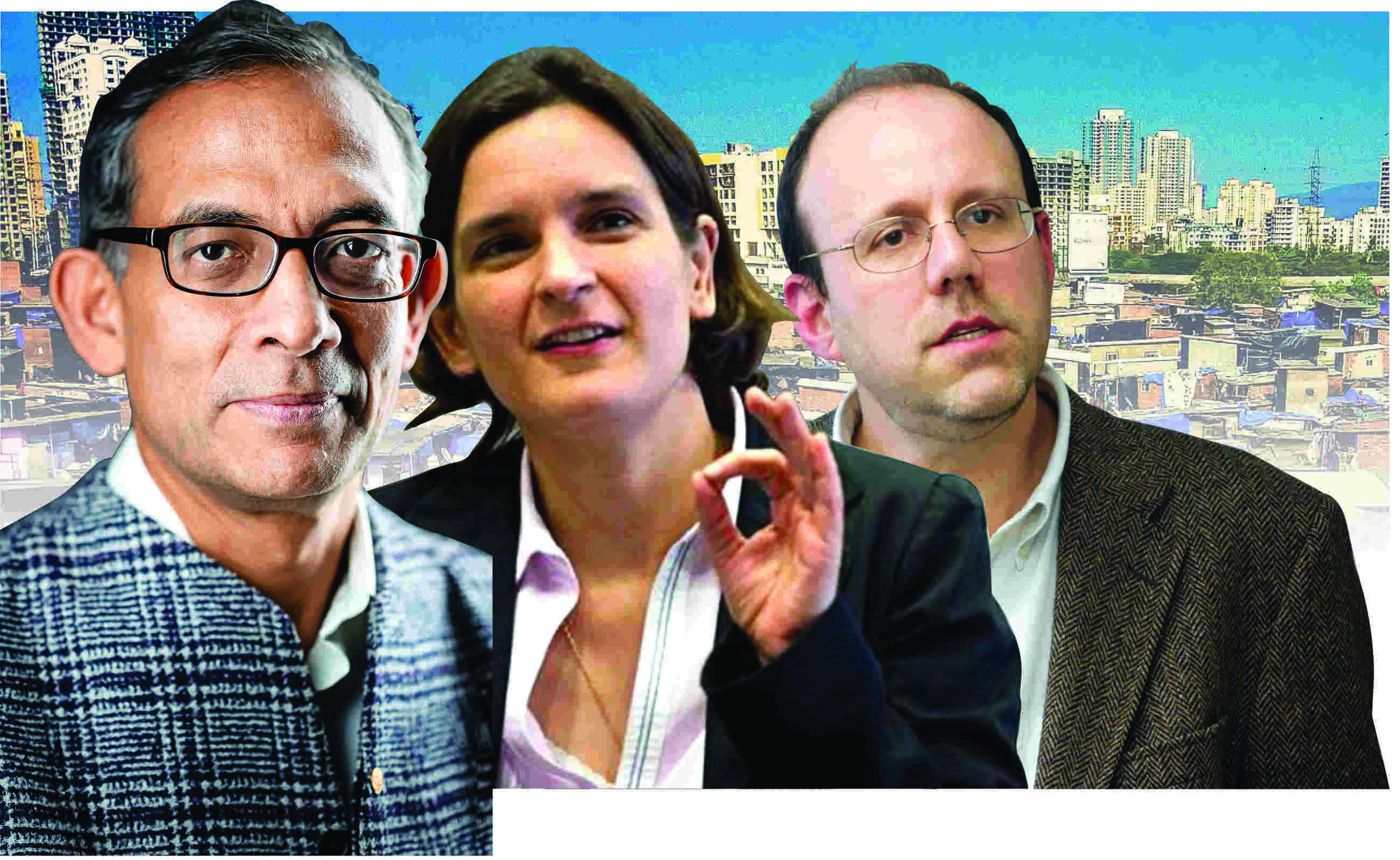 Banerjee completed his undergraduate studies in economics from Presidency College in Kolkata in 1981, Masters in economics from Jawaharlal Nehru University, Delhi, in 1983 and his PhD in economics from Harvard University in 1988. His doctoral thesis was titled 'Essays in Information Economics'. After his PhD, Banerjee taught at Harvard and Princeton, before joining MIT as a faculty member in 1993. In 2003, he co-founded the Abdul Latif Jameel Poverty Action Lab (J-PAL) along with Duflo and Mullainathan.

Duflo did her undergraduate studies in history from Ecole Normale Superieure in 1994. She did her Masters in social sciences in 1995 and her PhD in economics from MIT where her supervisors were Abhijit Banerjee and Joshua Angrist. Her doctoral thesis was on the impact of higher education on wages in the context of experiments in Indonesia on the school expansion programme there. After her PhD, she joined MIT as a faculty and later became one of the youngest faculty to get tenure. She was one of the co-founders of J-PAL.

In this article, we will review the main works of the three laureates and see how they continue to influence public policy, particularly in the developing and less developed countries.

Banerjee and Duflo have collaborated with Kremer in a number of studies. Broadly, Banerjee and Duflo have worked in the areas of education, healthcare, microfinance, poverty and hunger, and adoption of new technologies. Using experiments, they have come up with startling results, which have helped shape public policy.

In the area of education, Banerjee and Duflo built on the work of Kremer. Kremer did a number of experiments in Kenya on factors affecting learning outcomes. He had found that remedial tutoring and computer-assisted teaching methods had a significant effect on learning outcomes. Banerjee and Duflo tested this hypothesis through experiments conducted in two Indian cities and found it to be true. In other words, teaching methods and training of teachers were far more critical to enhance learning outcomes as compared to factors such as supply of textbooks or mid-day meal schemes.

In the area of healthcare, Banerjee and Duflo noticed a dismal picture in the immunisation efforts in rural areas in India. They found that mobile health clinics that provided immunisation vaccines could help solve the problem.

In microfinance, Banerjee and Duflo carried out experiments in Hyderabad and found that microcredit programmes did not significantly increase profitability of small businesses in the long run, and did not improve consumption, health and education in the target group.

However, what distinguishes Banerjee and Duflo is their significant work on global poverty and hunger through J-PAL. The poverty lab uses evidence-based recommendations on social and economic policy. Their simple dictum is that any policy should work, not only in theory, but also for the people, who it is intended to benefit. For example, in a large worldwide programme launched by Hillary Clinton in 2010, where poor households were to replace their inefficient cooking stoves with more environment-friendly ones, the programme failed to work. J-PAL found that the new stoves were not user friendly, broke down frequently and couldn't be repaired easily. It is estimated that J-PAL has reached 400 million people through 1,000 random controlled trials carried out in 80 countries. J-PAL's methodology is to break down the problem into smaller pieces, find solutions and then bring it all together. It is clear that Banerjee and Duflo are not greatly impressed by the neoclassical models which require 'hyper-rationality', or by the macroeconomic models which are based on theory and very few facts. In an article in 2005, Banerjee had argued that policy interventions are often based on theory or vague goals with very little idea whether they will work in the real world. To quote from this article on World Bank policy recommendations:

The Sourcebook is meant to be a catalogue of what, according to the bank, are the right strategies for poverty reduction. These are also, we presume, strategies into which the bank is prepared to put its money. It provides a very long list of recommended projects, which include: computer kiosks in villages; cell phones for rent in rural areas; scholarships targeted toward girls who go to secondary school: schooling voucher programmes for poor children; joint forest management programmes; water users' groups: citizen report cards for public services; participatory poverty assessments; internet access for tiny firms; land titling; legal reform; micro-credit based on group lending; and many, many, others.

While many of these are surely good ideas, the book does not tell us how we know that they work. Indeed [...] this is not a primary concern of the authors.

Banerjee and Duflo have written widely, but have become well-known for their books, 'Poor Economics' and 'Good Economics for Hard Times'. In 'Poor Economics', they have looked at the lives of the poor and found that decisions taken by the poor, which look 'irrational' to economists, are perfectly sound and rational. To quote from the book:

"The poor are no less rational than anyone else — quite the contrary. Precisely because they have so little, we often find them putting much careful thought into their choices: They have to be sophisticated economists just to survive."

In 'Good Economics for Hard Times', Banerjee and Duflo move out of their comfort zone and attempt to address macroeconomic problems such as immigration, international trade and global inequality. They argue that the conventional trade theories such as comparative advantage, Heckscher-Ohlin or Stolper-Samuelson Theorem require many conditions to be correct. These conditions are seldom met in the real world. An interesting chapter titled 'Pains from Trade' (a play of words on 'Gains from Trade') argues that these theorems talk of economies in equilibrium after factors of production move from one place to another. However, in the real world, economies, labour and capital tend to be sticky and don't move too easily because of a number of non-economic factors (such as family etc.). The book also offers insights into issues like immigration and taxation. On immigration, the writers suggest that it does not suppress wages, contrary to what traditional labour theory tells us. This is because migrants are also consumers and this raises demand, which, in turn raises wages. On taxation, they have suggested that tax cuts for the wealthy don't contribute to growth, since the wealthy don't change their consumption habits as a result of these cuts.

Kremer's work is very similar to that of Banerjee and Duflo and uses experimental economics in areas such as poverty reduction, education and health economics. Indeed, Kremer has collaborated often with the other two laureates.

Kremer has worked on a range of issues. In his well-known paper, 'Population Growth and Technological Change: One Million BC to 1990', Kremer found that economic growth actually increased with population growth. But Kremer's initial work in Kenya is well-received even today. He studied primary education in Kenya closely and found that text books didn't really contribute to better learning outcomes. Instead, better teaching methods and computer-assisted teaching, which helped targeted teaching, were far more effective in improving learning outcomes.

Kremer also worked on healthcare issues such as development of vaccines in developing countries. He suggested that incentives, rather than resources, are much better to encourage vaccine development. Kremer also suggested the economic theory of skill complementarities called the O-Ring theory of economic development. The theory simply says that any production process consists of a series of tasks, and that each of these tasks must be performed with utmost proficiency for the final product to have any value. In his 1993 paper, where he proposed the theory, he suggested a production function, where an error may occur in any of the processes. He found that high-skill workers (making fewer errors) will be matched together in equilibrium and that wages and output are directly proportional to levels of skill.

Kremer also works closely with WHO on issues of public policy in infant mortality, and its relationship with water, sanitation and hygiene. Kremer found that child mortality had an effect on living standards. Kremer also found that small steps go a long way in getting desired results in public policy. For example, sending medical teams to remote villages tripled the number of children being vaccinated; or adding an incentive in the form of food doubled the vaccination. Kremer published his findings in his 2004 book, 'Strong Medicine', co-written with his wife and colleague Rachel Glennerster, who is the Chief Economist at the UK's Department for International Development. Based on Kremer's work, five countries and the Bill & Melinda Gates Foundation pledged USD 1.5bn to develop a vaccine against diseases such as pneumonia and meningitis.

Kremer is active in various development organisations and is associated with Innovations for Poverty Action (IPA), a research organisation; Giving What We Can, an altruism organisation; and WorldTeach, a Harvard-based organisation which places Harvard graduates as volunteer teachers in developing countries.

Even with high growth rates witnessed in developing countries, global poverty remains a challenge. Millions of people still struggle to make ends meet, and primary education and primary healthcare remain out of reach of people across the world. This is reflected in high infant mortality rates in South Asia and many African countries. Even in developed countries of North America and

Europe, there are a number of people who have fallen by the wayside and are deprived of health insurance and basic medical needs.

Banerjee, Duflo and Kremer have used a large number of randomised control trials (RCTs) and carefully designed experiments to provide evidence-based policy recommendations. Using RCTs in development economics is a unique contribution of the three laureates. As we know, in a RCT, a group of participants are targeted with a policy intervention, while the others are not. And the effects of the intervention on the two groups are then compared. As a result of this approach, the focus shifted from looking at big problems to smaller problems such as adoption of improved cooking stoves and the impact of textbooks on learning.

To be sure, there has been criticism of their works. Angus Deaton, the 2015 laureate, has stated that identifying a causal effect is not so useful because it inevitably depends upon many factors and isolating them is not easy. Further, one cannot have blind faith in RCTs because what works in one policy context may not always work in another. Even so, the works of Banerjee, Duflo and Kremer have taken us close to the area of action and allowed us to get a real feel of how policy interventions improve the lives of the poor.

The writer is an IAS officer, working as Principal Resident Commissioner,