The poetic anthology, Ink from Night Skies, encapsulates the expressions of Mahima Sethi’s poetic self — from reflecting her quest for identity and her innermost tempest to her self-scepticism and melancholy, but only to end in hope 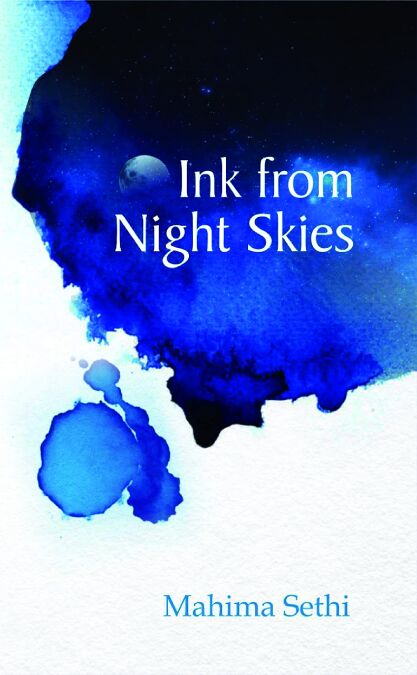 The world looks increasingly stormy and hostile for someone barely out of her teens and living away from her family with peers. Yet, while the young soul strives to find her moorings, her perceived discrimination and imaginary defects shake up her efforts to make out her true identity. No wonder then that the universe presented in the anthology, 'Ink from Night Skies,' by the young poet Mahima Sethi, is characterised by tumult and chaos, with violent nature unfolding itself at every turn. Like the mother earth emerging from the fiery inception process, the poet also undergoes the creative throes. She is aware of the agony involved in creation when she writes, 'I have to cut open/ my insides every time/ to draw ink for my page' or 'I am waiting, as I bleed/ to write' (Navigating, p-3).

She finds her world strewn with fireworks, lightning, thunderstorm, tempest and 'wrestling hellhounds' while her 'earth shudders along my feet/ locking up fidgeting demons/ inside the ground' (Defence Mechanism, p-12). But, like the primordial violence controlling the world outside, she is tormented by 'cloudbursts inside of me' (No Refuge, p-89). She laments, 'The roars and rumbles outside/ are not louder than/ this vehement tempest inside' (Three Pillows, p-80). Sleep eludes her often as she tosses on her bed, waiting for the sunrise. In 'Forlorn', she writes, 'Stray thoughts keep me awake/ like a ticking time bomb in my head' (p-86). She is afraid of night and darkness. She is torn apart by sorrow as it insinuates into her existence not by hitting her loudly but 'Instead/ it eats away your core/ in silence'. (Void, p-88).

In such a milieu, doubt becomes the most defining feature of her life. She questions her worth when she asks, 'Scepticism haunts me tonight/ Am I good enough?/ Surely I can't be the best,/ but am I good enough,/ or just a charlatan holding a pen?' (Inquietude, p-93). The body-shaming and doubts of self-worth festered by social media have doomed the confidence of many a young one today; her poetic self is also troubled by this obnoxious trend as she writes, 'I utterly despised the mirror,/ wanted to get out of my body,/ shed and rip apart my skin,/ beseeching for a straighter nose' (Unapologetic, p-8). All these fears and doubts leave her foundering with hopelessness, as she grimly concludes, 'And the most potent herb/ could not numb/ the pain of my scars.' (Scars, p-70). Her poetry enshrines her angst and her ennui.

Melancholy turns to rage, and her words radiate vengeance and retribution for her perceived but unnamed foes. With a tone of finality, she wishes to destroy the wrongdoers when she proclaims, 'Dare not take refuge under my branches / I shall burn you along with me.' (No Refuge, p-89). Or again, when she takes it out on the burden inherent in the culture of physical glamour with the piquant words,

'Do not teach little girls / to need to have a sharp jawline / Instead /teach them/ to slit tongues of imbeciles / with their sharp brains and wits.' (Proportions, p-30). At places, her poetry flourishes fierce feminism.

However, all these rage and retribution, doubts and despair, violence and virulence, do not condemn her poetic galaxy to an irremediable dark hole. On the contrary, hope and optimism lurk in many places. As her poetic horizon is quite expansive, there is plenty of scope to redeem her doubtful soul. She has her spiritual bent of mind, her faith in the glory of God, the power of nature to sustain itself, her love for humanity and, above all, her creative words to fall back on. She is sure that she herself is 'God's glory/ I'm God's Mahima'. With the grace of God, even death does not sting. It brings 'eternal rest', while the moon becomes her 'confidant, my witness/ of my yearning'. (Swargadwar, p-34).

While her faith in God soothes her anguish, her poetry becomes her balm and her creation relieves and energises her. The night sky may be murky, but the ink it oozes out has the power to brighten her world. Her life comes full circle when, with certitude in her voice, she sings, 'Perhaps/fear that torments/grants power to learn to love/what terrifies you' (Perhaps, p-85).