From NEFA to Arunachal 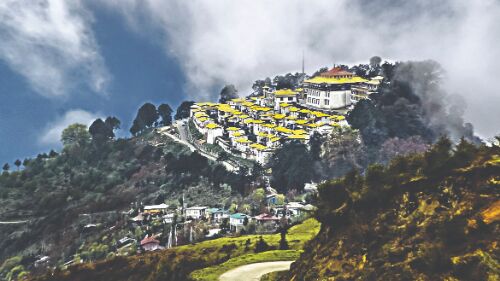 The extreme North-East frontier region of India bordering China was a relatively unknown region of the country for a very long time. The rugged terrain of the North-East frontier comprising thick forests, mountain ridges, deep gorges, fast-flowing mountain rivers forded by dangerous looking cane bridges looks forbidding. This region is the home to several groups of tribal people who have been living under seclusion for ages. The history of this region is steeped in tradition, folklore, and mythology. It was only after the conflict with China in 1962, that the region attracted the interest of the people in the rest of the country.

The British annexed Assam following the Treaty of Yandabo in 1826. However, their policy towards the hill tribes of this region was that of non-interference. The British were mainly concerned about ensuring that their commercial interests in Assam, particularly in the tea gardens, were protected from the plundering raids of the tribesmen of the North-Eastern frontier tracts. When occasionally, the tribesmen were able to successfully raid the tea gardens in the plains of Assam, the British carried out punitive expeditions during which not only deterrent action was taken against the tribesmen, but also their villages were burnt down. Apart from that, the British did not really administer the frontier tracts. The Bengal Eastern Frontier Regulations, 1873 provided for an inner line beyond which no British subject could pass without a permit known as the 'Inner Line Permit' (ILP). Although the ostensible reason for the ILP was to protect the interests of the tribal people, the real reason was to safeguard British commercial interests from the incursions of the hill tribes. It was only after 1914 that the first steps to administer the region were taken by the British. Even then, the region was rather loosely administered by the British and the hill tribes were largely left to themselves.

In 1914, the hill tracts of the Darrang (now Sonitpur) and Lakhimpur districts of Assam were separated to form the North Eastern Frontier Tract (NEFT). In 1937, the NEFT came to be known as the Excluded Areas of the province of Assam in terms of the provisions of the Government of India Act, 1935. After independence, the NEFT was brought under the 6th Schedule of the Constitution and was administered by the Governor of Assam as an agent of the President of India. He was assisted in this task by an advisor. In 1954, the NEFT was renamed as the North Eastern Frontier Agency (NEFA) and administered directly by the Central Government.

After independence, a conscious drive was made by the Government of India to penetrate the remote parts of the extreme North Eastern frontier region of the country and to bring the people living in these locations under Indian administration. For this purpose, patrols of the Assam Rifles were sent to the remote parts of the region, and outposts of the civil administration were set up in many places.

It was during one such expedition in February 1951 led by Major Ralengnao 'Bob' Khathing, a Naga officer that Tawang was brought under the control of the Indian administration. While this was a landmark event which had far-reaching implications, not all such expeditions were successful. In fact, some expeditions ended up tragically.

On October 22, 1953, during one such expedition, six men of the Assam Rifles, four civilian officials and 50 porters were killed, and several others were captured by some villagers in the remote village of Aching Mori located in the then Siang Frontier Division. This incident sent shockwaves throughout the North East. There was a cry for sending a punitive expedition to punish the entire population of Aching Mori as was done during British Rule.

Jairamdas Daulatram, the then Governor of Assam, however, refused to send a punitive expedition to Aching Mori. He acted on the advice of his Advisor, Nari Rustomji, an ICS officer who had spent much of his career in the frontier areas of North East. Rustomji was well-acquainted with the complexities of the administration in the North-Eastern frontier tracts. His understanding of the tribal mind and his strong commitment to the welfare of the tribal people had endeared him to them. On his advice, instead of taking punitive action against the villagers of Aching Mori, action as per law was taken against those responsible for the massacre. The perpetrators of the crime were arrested, tried, and sentenced to life imprisonment. A joint civil and military expedition was dispatched to the affected areas to secure the release of the captured porters, prevent further hostilities and to assert Indian authority in this area. It was perhaps because of this singular decision of the Governor that the cycle of violence was eventually broken and the foundations of lasting peace in the NEFA were laid.

After the Aching Mori massacre, there was a concerted effort on the part of the administration to win the trust of the hill tribes. The civil administration was reorganised and made sensitive to the concerns, needs and aspirations of the tribal people. The Indian Frontier Administrative Service (IFAS) was constituted and its members were required to serve exclusively in the NEFA. Officers serving in the NEFA were required to understand the tribal way of life. Verrier Elwyn's 'A philosophy of NEFA' was compulsory reading for officers posted in NEFA. Measures were taken to improve road connectivity, provide education, health, and other facilities to the people of the region at par with the rest of the country. The region has, over the past few decades, seen rapid development in all spheres of life.