Home > Opinion > The road ahead
Opinion

How will a new US administration shape the global approach towards the Indo-Pacific? 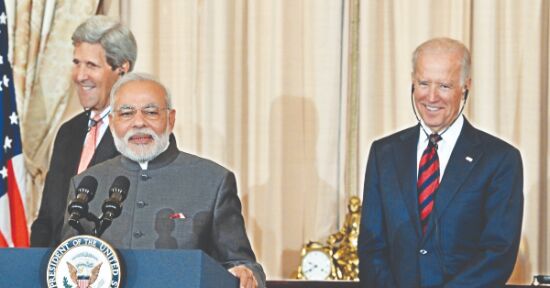 Among the major international policy issues of President Joe Biden, the strategic community will watch with interest his approach to the Indo-Pacific region which over the past few years, has entered the geopolitical lexicon.

Although the concept came into the public domain when the then Japanese Prime Minister Shinzo Abe talked of it during his address at the joint sitting of Parliament in New Delhi in 2007, the term gained greater currency during the term of the U.S President Donald Trump.

What trajectory would the new Biden administration take on Indo-Pacific? Will it be as aggressive as the one rolled out by the previous administration that sought to build a partnership of countries in the region in the backdrop of a belligerent China?

Early indications of what the world can expect from Washington can be gleaned from the statements of key appointees of President Biden on the subject with China in focus.

During the Senate confirmation hearing, the Secretary of State-designate Anthony Blinken emphasized that India will remain a pillar under the Indo-Pacific strategy reminding that the policy was first crafted by the Obama administration.

Interestingly, Kurt Campbell who is credited with drafting the Pivot to Asia (later called rebalance) during President Obama's tenure is now designated as the Coordinator for Indo-Pacific.

Campbell's thoughts on the subject appeared in a recent article he wrote along with Rush Doshi of the Brookings Institute in a prestigious journal. The spotlight was on dealing with the Chinese challenge in the region and working on a policy in the backdrop of Beijing's intensive economic engagement with countries around it.

Expressing concern over the aggressive actions of China across the Indo-Pacific, U.S. Defence Secretary-General (Retired) Lloyd Austin told the Senate that the new administration would seek to deepen and broaden defence cooperation through the Quad security dialogue and other multilateral engagements. During outreach to his counterparts in Japan and South Korea, Indo-Pacific found a mention.

While the simple geographical construct could mean the vast expanse connecting the Indian Ocean to the Pacific, it still is interpreted differently by different countries depending on the location. For India, the area stretches from the West Coast of North America to the East Coast of Africa, as against the initial American description of the maritime space as between Hollywood (U.S.West Coast) to Bollywood (India's West Coast).

Be that as it may, the space is important both in strategic and economic terms. Over 50 per cent of the global trade runs through this area and some 60 per cent of the world's population stay in this region. Should India look at it in terms of a geo-strategic or geo-economic construct or a blend of both?

At the Shangri La dialogue in 2018, Prime Minister Narendra Modi enunciated India's strategy on Indo-Pacific as the SAGAR (Security and Growth for All in the Region) doctrine and as an inclusive proposition with ASEAN at its Centre. The primacy being governed by rules, with freedom of navigation, open connectivity and respect for the territorial integrity and sovereignty of all states.

The United States' declassified Strategic Framework for Indo-Pacific prepared by President Trump's National Security Council and adopted by his administration gave India a prime place along with Japan and Australia. The document mentions the growing assertiveness of China and suggests that Washington works with like-minded countries against the emerging challenge.

India does recognise that there can be varying interpretations of how the Indo-Pacific should evolve; its own vision is guided by the seven pillars and greater cooperation to meet the challenges.

This also finds reflection in the remarks of External Affairs Minister S Jaishankar at a meeting last November in which he underscored issue likes maritime security, transparent and market-based connectivity and counter-terrorism, requiring solutions through cooperation among countries.

Characterising Indo-Pacific, he saw it as "a rejection of spheres of influence…it is a reiteration that the world cannot be frozen for the benefit of a few, even if that is the case with the United Nations. It is an indication of our future, not a throwback to the past. Only those harbouring a Cold War mindset will see such intentions."

That the rise of China and its intentions remain a matter of concern not just in the region but across the globe that can be seen with countries such as France and the Netherlands evincing interest in the Indo-Pacific. India would have to work its way through this construct, striking a fine balance.