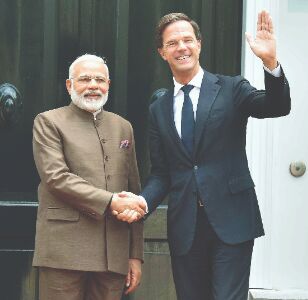 As summer approaches, water becomes an important topic of debate and discussion in the country. Rising temperatures add to the problem of supply of water both for drinking and requirement for daily chores.

Keeping in view the importance of the subject, this month India elevated its rather unique understanding with the Netherlands through the "Strategic Water Partnership". The European country is famous for its dykes to prevent floods affecting daily life and is one of the frontline countries and a leader possessing technology for water management.

With a fourth of the country under sea level, over the past few decades, the Kingdom of Netherlands overcame challenges posed by water by harnessing technology in the management of delta, flood control, desalination of soil, ports and inland waterways, water recycling, converting wastewater and conserving energy.

Policies of the Modi Government focus on water security and among its major flagship missions include the Jal Shakti Abhiyan and Jal Jeevan Mission, Nal se Jal (Tap water at homes). The last-named ambitious programme aims to supply piped drinking water to 19 crore households in the country by 2024.

Other programmes include promoting water efficiency, water to every farm, per drop more crop and Namami Gange Mission. India-The Netherlands partnership on water management has an interesting acronym 'DIWALI" which stands for 'Dutch India Water Alliance for Leadership Initiative' in which Dutch water management experts interact with officials including those working in Department of Science and Technology research programmes, and/or through specialised organisations like Indian Institute of Hydrology, the Water Resources Ministry at the Centre and similar organisations in the State governments.

One of the upticks of the recent virtual summit PM Narendra Modi had with his Dutch counterpart Mark Rutte on April 9 agreed to elevate the Joint Working Group on Water to the Ministry-level so that different programmes by the Ministry can come up with a coherence strategy.

Another programme with The Netherlands goes by an equally interesting acronym LOTUS HR (Local Treatment of Urban Sewage Streams for Healthy Reuse). The joint collaborative project between universities and companies funded by the Department of Bio-Technology and the Dutch NWW-TTW, which began in 2017 is to study technologies for anaerobic sewage.

Launched in October 2019, the programme aims to clean Delhi's Barapulla drain — considered one of the dirtiest drains flowing into River Yamuna. It is a holistic programme to recover water, energy and nutrients from urban wastewater, which could be replicated to other drains. Besides addressing water issues, it does help in tackle the problem of sewerage.

Another area of work by the Dutch is involvement in the Clean Ganga campaign. This area witnessed work in leather tanneries in Kanpur and Unnao encouraging industries there to adopt eco-friendly technologies and check the flow of polluted water into the sacred river.

In Uttar Pradesh, another project underway is work on the conservation of water. It is through adopting efficient agriculture practices. Sugarcane is widely grown across the Western part of the state and sugar mills dot the region.

A Dutch group is also working with manufacturers of textiles and leather in Gujarat. The primary concern is to tackle issues of solid waste and wastewater and in Punjab, similar activities are taken in the textile-finishing cluster in Ludhiana, known for its hosiery and woollen industries.

Now consider the geographical spread of this bilateral engagement in just one sector. In West Bengal, the Dutch are undertaking a pilot project in the Sundarbans region to begin re-using some of the old creeks. The task involves replacing the salty water occupying the creeks with fresh water.

Down south, Chennai city faces an acute shortage of water year after year. It is taking part in a programme called ''Water as a leverage for Resilient Cities Asia". Here the Dutch Government is funding a design programme. It entails a design development in which infrastructural proposals would be developed into implementable projects. The Asian Infrastructure Investment Bank and The Netherlands Development Finance Company is backing it.

Cooperation between the two countries in this sector is just about intensifying and the roadmap looks impressive. Besides announcing the Strategic Partnership, after the Summit both Prime Ministers discussed how to widen the bilateral cooperation in new areas.

A glimpse of the breadth of engagement can be analysed from what came up for discussion. Water budgeting, cost-effective decentralised treatment technologies, converting wastewater to energy, application of Artificial Intelligence in decision making, non-point pollution source assessment and abatement, mapping of ecosystem services, reclaiming river space basin protection against disasters and river hazard management.

Water is the spring of life and countries are working on an agenda to ensure water security amid concerns of possible global war over 'White Gold."