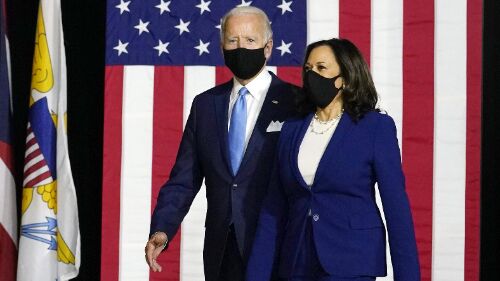 It came as a rude shock to Indians. The initial cold shoulder offered by the United States administration under President Joe Biden in providing assistance to India battling the brutal second wave of COVID-19 stirred memories of a different kind.

The initial reaction from the State Department, underscoring its priority was to ensure every citizen is inoculated first, came in response to India seeking help from the global community to tide over the health crisis

That single statement blew a gaping hole and brought down the rising graph of this 'global strategic partnership' by several notches. While the depth of engagement between two democracies with 'shared values' spanning across sectors ranging from space to sea would remain, the mood among Indians would remain sullen.

The 'America First' policy of the previous Trump administration appeared to have returned in another form. It was shorn of the humanitarian approach and faltered on the touchstone of human rights; the influential progressive section in the Democratic Party insisted it be applied in America's engagement with the world.

India discovered that the nature of relationships did not matter when it came to the crunch. At a time the country was facing one of its biggest challenges in tackling the virulent resurgence of the pandemic, the United States appeared nonplussed.

The social media was on fire with many questioning the rationale while some reminded how the United States administration all but forgot that India rushed medicines when the pandemic was on a rampage there last year with the country reporting three lakh cases a day.

The pressure then mounted on the Biden administration. While the Government of India embarked on an outreach — both with senior officials in the US government and other countries — the community of Indian Americans, friends of India on the Capitol Hill, and influential think tanks launched a campaign in support of India, now the COVID-19 hotspot in the world.

An impression was gaining ground that the Biden administration was not receptive even as many world leaders began declaring solidarity and support for India in this hour of immense challenge. The doors of world capitals offering required assistance in the form of oxygen and other essential medical supplies poured in.

By Sunday last, there was a turnaround in Washington's attitude. The White House indicated a shift in its policy after a conversation India's National Security Adviser, Ajit Doval had with his American counterpart Jake Sullivan.

On his part, President Biden tweeted "Just as India sent assistance to the United States as our hospitals were strained early in the pandemic, we are determined to help India in its time of need". He followed it up with a call to Prime Minister Narendra Modi.

The US announced to start delivery of the raw material needed to make the vaccines for COVID-19, adding medical equipment in the form of oxygen concentrators, rapid diagnostic kits, ventilators, and protective gear as India combat the rampage caused by the spread of the pandemic.

"The US has identified supplies of therapeutics, rapid diagnostic test kits, ventilators and PPE that will immediately be made available for India. The US is also pursuing options to provide oxygen and related supplies on an urgent basis." An official statement by the US emphasised.

To soften the situation, the United States said it is deploying an expert team of public health advisors from the Center for Disease Control (CDC) and USAID to work in close collaboration with the US Embassy, India's Health Ministry and Epidemic Intelligence Service staff. USAID will also quickly work with CDC to support and fast-track the mobilization of emergency resources available to India through the Global Fund.

Among the issues on the table that found resonance in the United States is the argument that the country could allow India access to the AstraZeneca vaccine, known as Covishield in India and is part of the inoculation programme. The US procured 300 million doses but the vaccine is not part of its inoculation drive there.

Extending support to the demand Indian American Congressman Raja Krishnamoorthi tweeted that the United States cannot let the vaccines sit in a warehouse but should get them where it saves lives. Others too are stirring into action. Yet, the initial insouciance caused damage to the flourishing ties.

Of course, there were three other Indian Americans on Capitol Hill, but what was galling to most Indians and the community there was the silence of Vice President Kamala Harris as the huge human dimension of the effect of pandemic began unfolding in India.

Once the Biden administration made its decision to augment supplies to India, the Vice President through a tweet mentioned how the US is working closely with the Indian Government to rapidly deploy additional support and supplies during the alarming COVID-19 outbreak.

Yet, the initial insouciance of Washington inflicted wounds on the flourishing ties and it would require a long time for the United States administration to undo it. For many old-timers, it was a grim reminder that India should not depend too much on Washington when the time comes. While the nature of bilateral engagement is much different as compared to the last century, the scars would be visible for a considerable period.