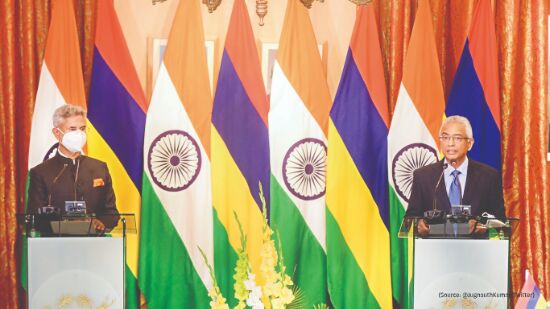 India's quest to broaden its engagement with countries in the Indian Ocean region came into focus during the recent visit of External Affairs Minister S Jaishankar to strategically important island nations — Mauritius and the Maldives.

The outreach is part of a continuous effort by New Delhi to interact with the leadership of these countries and it acquires special significance on two counts — one, it comes at a time when countries are gearing up for a post-Covid world order and the other is inescapable presence of China that is making deep forays into the region.

The Indian Ocean region is considered strategically important where China is stepping up its presence and competing to expand in geopolitical, economic, and military spheres. India is seeking to retain and broaden its presence especially with countries like Mauritius whose population consists of predominantly Indian-origin people.

In a way, the sojourn of the External Affairs Minister reinforced the strong and traditional ties India has with the people of Mauritius and its leadership. It came around the time there were protests on issues around the impact of an oil spill on the environment. India had assisted Mauritius by sending 30 tonnes of equipment and a Coast Guard team of specialists to help in containing the oil spill.

A significant development during the visit of the External Affairs Minister was the signing of the Comprehensive Economic Partnership Cooperation Agreement (CEPCA) which was under discussion for five years.

The agreement, the first of its kind, India signed with any African country, allows preferential access to Mauritius for the bulk of the trade and to the huge Indian market of items including fruits, juices, speciality sugar and frozen fish whose current import bill cost is USD 15 billion. In addition, the pact envisages trade in services which contributes 76 per cent to the GDP of Mauritius just as it does over half to India's GDP.

More important is the agreement should pave the way for Indian businesses to get a gateway to Africa which has an Africa Continental Free Trade Agreement that became operational at the start of 2021. Fifty-four of the 55 countries in Africa have signed the agreement and 34 ratified it.

The move, in the words of the African Union chairperson and the President of South Africa, Cyril Ramaphosa, is aimed to develop intra-continent trade, promote industrialisation and competitiveness, contribute to job creation and unleash regional value chains that would integrate Africa into the global economy and attract investment.

New Delhi has offered Port Louis 95 sub-sectors from 11 broad services sectors and it could facilitate Indian investment in the country. Indian planners envisage that home companies can draw upon the bilingual prowess of Mauritius for investment in Francophone nations in the continent. Besides English and Bhojpuri, French is spoken widely across Mauritius.

The Indian agreement came at a time when China operationalised its first Free Trade Agreement with any African country through Mauritius. It came after years of negotiations with China seeking to gain a more firm presence in the Indian Ocean Region.

Besides attempts to address the trade imbalance, Mauritius could also offer a platform for Chinese exports into mainland Africa and the strategic value of India's move can be seen in this backdrop.

However, India has an advantage that a majority of the people have Indian roots. Mauritius is a country where migrant labourers travelled during British times and the cultural connect remains strong.

While continuous engagement to play on this strength remains in focus, an emerging challenge for policymakers could be the attitude of the second or later generation Pravasi Bharatis in Mauritius. Like aspirational youth, many look to the West and Europe for higher academic work. New Delhi offers the highest number of nearly 400 seats in Africa to Mauritius under the Indian Technical and Education Cooperation Programme.

Trade agreement apart, India's announcement to give a surveillance aircraft Dornier and Dhruv Light Utility Helicopter to assist Mauritius to keep an eye around its shores in addition to a USD 100 million soft loan to procure other defence assets takes further the SAGAR (Security and Growth for All in the Region) doctrine of the Modi Government, enunciated during its first term.

Similarly, in the Maldives India signed an agreement to develop, support and maintain the Maldives National Defence Force Coast Guard Harbour at Sifvaru at the request of the Maldivian government in 2013 to enhance the capability of its defence forces to undertake maritime surveillance of its Exclusive Economic Zone and islands. Subsequently, it signed other pacts.

The Indian Ocean Region remains an important transit route with an estimated 70 per cent of the global oil travelling through the sea. It is also home to some 2.6 billion people or 40 per cent of the world's population with the Strait of Hormuz, Malacca and Bab el-Mandeb as its choke points.