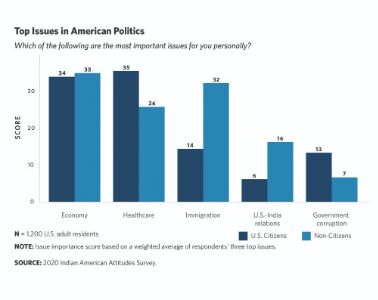 With the presence of four million in the United States of America that is slightly over one per cent of the country's population, Indian Americans are one of the most influential groups in the country's political and governance structures.

The last round of elections demonstrated the extent to which this second-largest immigrant group has assimilated into the system with many of them occupying positions that now begins with Vice President Kamala Harris, four members in the House of Representatives in the US Congress and many more in state legislatures and county boards across several of the 50 states.

Studies in the past showed that the community is also among the highly educated and high-income groups in the country where life, liberty and the pursuit of happiness form an inalienable part of the Declaration of Independence. Last week, interesting facets of Indian Americans, their political preferences, inclination and approach towards various issues of adoption, motherland and other issues in the country was published in a survey 'How do Indian Americans View India', conducted online last September by Milan Vaishnav of the Carnegie Endowment for International Peace, Devesh Kapur of Johns Hopkins University and Sumitra Badrinathan of the University of Pennsylvania.

The survey states that 36 per cent of those born in the United States or second-generation Indian-Americans remain connected to the country of their parents' origin as compared to 59 per cent of foreign-born naturalised citizens of the community who also shared a similar feeling of close connection.

This, when juxtaposed with the corresponding figure of 25 per cent of US-born Indian Americans who expressed either less connection or not connected at all by another 15 per cent of naturalised citizens offers a study in contrast.

While 40 per cent of the community did not identify themselves with any political party in India, 33 per cent claimed association with the Bharatiya Janata Party, 12 per cent with the Indian National Congress and 16 per cent with other parties.

These aspects offer a window of opportunity for policy planners in India while drafting an outreach programme to engage with the community whose contribution in building a favourable opinion by law and decision-makers stands out.

The Government was able to motivate and energise the Indian-American community for the past two decades since the US slapped sanctions against India after the 1999 Pokhran nuclear explosions till the passage of the India-US nuclear agreement that reflected the changed attitude of successive administrations.

After initial attempts made to pressurise India to sign the Comprehensive Test Ban Treaty backed by the strong non-proliferation lobby within the United States Congress, its members later voted to endorse India specific waiver a few years later. The change of attitude came with the Government and the Indian American community remaining engaged both with the administration and the legislative wing.

On the cultural front, the survey found that a majority of Indian Americans watched Indian movies or television shows. For those born outside the US, it stood at 68 per cent as against 51 per cent of those born in the United States. Indian food appears to be a better draw with three-fourths of foreign-born and two-thirds of US-born members of the community savouring it.

These aspects do suggest that the emotional tug for the first generation of Indian Americans, some of whom were among 1,200 surveyed by the study, is greater than the second generation of US-born members of the community. The policy drafters would have to come up with a greater focus to assiduously woo the Indian Americans whose presence in the current Biden administration is more than ever before.