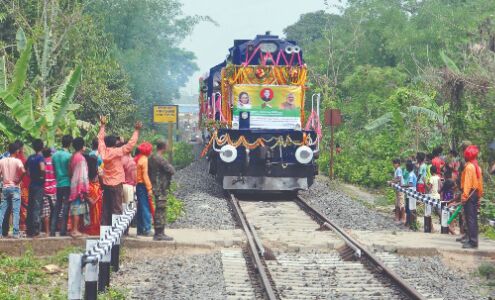 This week India will take a major step in furthering its "Neighbourhood First" policy with Prime Minister Narendra Modi visiting Bangladesh to participate in three major events — Mujib Borsho, the birth centenary of Sheikh Mujibur Rahman; 50 years of the establishment of diplomatic ties between India and Bangladesh; and 50 years of Bangladesh's war of liberation.

The event has special significance for both Bangladesh and India whose role in the liberation of the country from Pakistan and its creation remains etched in history. The March 26-27 sojourn will be PM Modi's first foreign visit since the outbreak of the global health pandemic.

Besides the historical, cultural and linguistic ties with Bangladesh, the relationship between the two countries is among the best in the neighbourhood. The close ties blossomed under the leadership of Prime Minister Sheikh Hasina, daughter of Sheikh Mujibur Rahman.

The deep nature of engagement remained even during the pandemic. There were several meetings between the officials and leadership through a blend of virtual and real modes. Around this time last year, March 17 to be precise, Prime Minister Modi participated virtually in the birth centenary celebration of Bangabandhu Sheikh Mujibur Rahman and then exactly nine months later on December 17, he and PM Hasina held a summit meet on virtual platform. Besides a clutch of bilateral pacts in various fields, both Modi and Hasina unveiled a postal stamp to commemorate the birth centenary of Bangabandhu.

Among one of the pillars of India's Neighbourhood First policy is to expand connectivity with countries in close geographical proximity. New Delhi and Bangladesh decided to restore rail and other connectivity links like inland waterways that existed between the two countries before 1965.

Last May, an addition was made to the Protocol on Inland Water Transit and Trade to include two new India-Bangladesh protocol routes (Sonamura-Daudkandi on river Gomti and extension of Dhulia to Godagiri up to Aricha on river Padma), five new ports of call and two extended ports of call. Sonamura-Daudkandi Protocol Route was also operationalised in September 2020. In July, the trial run of trans-shipment of Indian goods from Kolkata to Agartala via Chattogram was successful.

One of the spin-off benefits of connectivity is utilization of the infrastructure to engage in commercial and trade activity which is the hallmark of the relationship between the two nations. Five Indian states – West Bengal, Assam, Meghalaya, Mizoram and Tripura share a nearly 4,100-km boundary with Bangladesh that is India's biggest trade partner in South Asia. India is the second biggest trade partner of Bangladesh with bilateral trade between India and Bangladesh increasing over the last decade. India's exports to Bangladesh in 2018-19 were USD 8.2 billion and imports were USD 1.26 billion.

While the relationship is moving ahead at a steady pace, there have been a few issues that have cropped up including the effect of the Citizenship Amendment Act and National Citizens Register amid concerns in Bangladesh over the fate of those held without valid documents; the Teesta river water sharing; and then the increasing footprint of China in the region.

Days ahead of PM Modi's scheduled visit, on March 16, a meeting of India and Bangladesh joint river commission was held after a long time with both sides noting that the countries share 54 common rivers that influence the livelihood of people on either side. Both sides decided to expand cooperation across a range of water resource issues including the framework for sharing of river waters, mitigation of pollution, riverbank protection and flood management. As for China, the country is seeking to expand its reach in India's neighbourhood through various projects but then these are to be juxtaposed with how many of them got off the ground.

India's assistance to its neighbour during the pandemic, first with medicines and personal protection equipment kits now with the vaccines to inoculate people of Bangladesh against COVID-19, reinforced the common bonds between peoples.

There is a reservoir of goodwill for India and Indians in Bangladesh that has been nurtured over the decade. PM Modi's visit shall come as a great boost in this direction and symbolically, the specially-designed Khadi Mujib jackets should add sheen to the event around Mujib Borsho.